Among the Believers airs on the World Channel’s new series, Doc World, on Sunday October 16, 2016. Enter your zip code here to check your local listings.

Charismatic cleric Abdul Aziz Ghazi, an ISIS supporter and Taliban ally, is waging jihad against the Pakistani state. His dream is to impose a strict version of Shariah law throughout the country, as a model for the world. A flashpoint in Aziz’s holy war took place in 2007, when the government leveled his flagship mosque to the ground, killing his mother, brother, only son and 150 students. With unprecedented access, Among the Believers follows Aziz on his very personal quest to create an Islamic utopia, during the bloodiest period in Pakistan’s modern history.

The film also follows the lives of two teenage students who have attended madrassahs (Islamic seminaries) run by Aziz’s Red Mosque network. Throughout the film, their paths diverge: Talha, 12, detaches from his moderate Muslim family and decides to become a jihadi preacher. Zarina, also 12, escapes her madrassah and joins a regular school. Over the next few years, Zarina’s education is threatened by frequent Taliban attacks on schools like her own.

Aziz’s foil is nuclear physicist and leading educational activist Dr. Pervez Hoodbhoy. He passionately opposes Aziz through his public appearances, lectures, and the media. Opposition against Aziz comes to a head in December, 2014, when Aziz insults a grieving nation by trying to justify the brutal massacre of 132 school children in Peshawar by the Taliban. The attack ignites a movement to end extremism in Pakistan’s mosques and madrassahs. Led by Hoodbhoy and others, Pakistan’s moderate majority focuses on Aziz and calls for his arrest.

Intimate and shocking, Among the Believers offers rare insights into the ideological battles shaping Pakistan and the Muslim world.

Hemal has been a Mumbai and New York City-based documentary film editor/director for over a decade. She has edited films that have won three Emmys, One Oscar and seven Emmy nominations. She has won an Emmy for outstanding editing and was nominated for Independent Spirit Award.  Her credits include: Outlawed in Pakistan (Editor, Emmy 2014, PBS Frontline, Sundance); Saving Face (Editor, Oscar 2012, Two Emmys 2013, HBO/Channel 4); Shabeena’s Quest(Director/Editor, Witness, Al Jazeera); Flying on One Engine (Editor, SXSW, IDFA); Laughter (Editor, BBC); When the Drum is Beating (Editor, ITVS, Tribeca 2011); andBeyond Mumbai (Director, Camera & Editor, OWN, 2011 Webby nomination). She has produced and edited over 50 award- winning shorts for Odyssey Networks.

She directed, produced and edited her first feature film, Among the Believers, which debuted at Tribeca Film Festival. It has since shown at 50 festivals in 25 countries and won 17 awards. It will be in theaters in NYC and LA and will be released on PBS and Netflix. Currently, she is working as an editor for Barbara Kopple’s newest documentary on a transgender YouTube celebrity, Gigi Gorgeous. She is also working as a Producer and Editor for a Smithsonian TV documentary special about Indian weddings.

Jonathan’s work as director and/or producer has been supported by broadcasters including BBC, PBS, NHK-Japan and over a dozen other broadcasters. His latest directing project FOLLOW THE LEADER was featured on C-Span, CNN & Fox; released by Angelika Film Center, PBS stations & Cinedigm; and was the only documentary to premiere during both the 2012 Republican and Democratic national conventions. His first feature SUNNY INTERVALS AND SHOWERS (Director, Producer, Editor, Camera, 2003) screened at Festivals including Sheffield, Chicago and One World; aired as part of the BBC Storyville documentary strand; and was nominated for Grierson (British Documentary) and Mental Health Media Awards.

An equal Producer of AMONG THE BELIEVERS, Jonathan’s company Changeworx’s productions are currently being supported by funders including Ford Foundation, Sundance Documentary Fund, TriBeCa Film Institute, and Center for Asian American Media. Jonathan’s other personal credits include roles on a film about North Face founder Doug Tompkin’s Chilean conservation work; BEING BEBE, a decade-long project about performance in every day life featuring Cameroonian drag queen Bebe Zahara Benet; and a Best Documentary Emmy-winner with Stephen Fry. After studying social psychology, political philosophy, and painting at Stanford, Jonathan was a Fulbright Scholar studying at the UK’s National Film School (NFTS) in 1999. He has been based in Brooklyn since 2008.

Dow’s credits include Two Towns of Jasper (Sundance, P.O.V) and the Beacon Award winning I Sit Where I Want: The Legacy of Brown v. Board of Education.  He has worked extensively in Haiti since where he directed two films: Unfinished Country (Wide Angle), and When the Drum is Beating, (Tribeca, Independent Lens.)  His producer credits include Freedom Summer, Banished: How Whites Drove Blacks Out of Town in America, (Sundance, Independent Lens), The Undocumented (Independent Lens) and Toots (Tribeca, Theatrical) In addition to screening at numerous international film festivals and being broadcast on television networks around the world, Dow’s work has been exhibited at the Metropolitan Museum of Art, MoMA, and the Smithsonian Institution. He is the recipient of the George Foster Peabody Award, Alfred I. duPont Award, Anthony Radziwill Documentary Achievement Award, and the Duke University Center for Documentary Studies Filmmaker Award as well as many film festival honors.  He is currently in production on the Whiteness Project, and Bright Lights, Dark Minds, a series on mental illness.

David Zieff has been crafting documentaries, feature films and television for three decades, working in music, comedy and sociopolitical arenas, occasionally at the same time.  Zieff recently directed and edited McConkey, a documentary about the legendary extreme-skier Shane McConkey which premiered at the Tribeca Film Festival.  He also edited the Tribeca-opening, Time Is Illmatic, about rap icon NAS’ landmark debut album, and Alive Inside, an exploration of music and memory that won the 2014 Sundance Audience Award.  He edited and produced the critically-acclaimed Paul Williams Still Alive, which premiered at the Toronto Film Festival, as well Sundance nominees Crazy Love, winner of Best Documentary at the Independent Spirit Awards, Happy Valley, Amir Bar-Lev’s exploration of the Penn State scandal, and ESPN’s Winning Time: Reggie Miller vs. The New York Knicks.  He was also a creative consultant on the Oscar-winning documentary The Cove, won a coveted Peabody Award for the documentary mini-series Black Magic and was supervising editor of the multiple-award-winning Metallica: Some Kind of Monster, shaping over 1,600 hours of footage into one of the most celebrated music films of all time.  He recently served as a creative advisor in the Sundance Institute’s Documentary Edit & Story Lab and is currently teaching at NYU’s Tisch School of the Arts.

Milind Date is one of the most versatile musicians from India. He is known for his immaculate Bansuri (bamboo flute) playing and composing. Milind is a senior performing disciple of world-famous Bansuri virtuoso Pandit Hariprasad Chaurasia. With more than 3,000 performances to his credit, Milind has vast experience of performing on various stages and for varied size of audience ranging from 20-30 to 50,000!!. His concerts are energy-packed and the crowd involvement is surely exciting!

Not only has Milind studied Indian classical and folk music; he has studied and featured in different styles of music from all over the world. Indian Classical Music, Indian Folk Music, Devotional Music, Jazz, Blues, Rock, Fusion-World Music, and Free Music are the common types in which he is seen performing and recording. An accomplished, versatile composer and arranger, Milind has experimented with several music and dance forms, as showcased in his band Fusion Ensemble. This experimental trait has led him to incorporate various dance forms and instruments and perform with several musicians from around the world. Milind has composed music for several short films and documentaries too. One of these documentaries was on The Dalai Lama and other one on Dr. Shardchandra Dicksheet the well-known Plastic Surgeon. These films were shown in many, many film festivals all over the world.

Naziha Syed Ali is based in Karachi, Pakistan and has been a journalist for nearly 25 years. For most of this time, she has worked in the print media both as editor and investigative reporter, focusing on stories about human rights violations, urban crime/land issues and religious extremism. Ms. Ali was assistant editor at Newsline magazine for several years, during which time she won an award for best coverage of violence against women for her story about honour killing. She is one of very few Pakistani women journalists to have travelled to Kabul, Afghanistan and reported from there when it was ruled by the Taliban.

As a TV journalist, Ms. Ali has worked as a stringer in Pakistan for Channel Four News (UK) and produced a number of documentaries that have been screened on local television channels as well as at various international film festivals. Among these documentaries is the very well-received Miseducation of Pakistan, a shocking expose of government education in her country.

An activist for interfaith harmony and democratic rights, Ms. Ali is an IVLP alumni and Chevening Scholar. She has master’s degrees in English literature and TV journalism and is currently assistant editor at Dawn, Pakistan’s most widely read English newspaper.

Syed Musharraf Shah has been a freelance field producer and stringer in Pakistan for the past 7 years. He has worked with various national and international film crews, including BBC and Channel 4 to help them with location scouting and figuring out logistics in Pakistan. Skilled in helping film crews gain access into communities that are hard to reach, he was Field Producer for a Channel 4 documentary, Pakistan’s Streets of Shame. The film premiered at Sheffield Doc Fest and several other documentary film festivals, and has won several awards. He has also worked as a Field Producer for Mohammed Ali Naqvi’s film Happy Things In Sorrow Times, inspired by best-selling author Tehmina Durrani’s book of the same name.

His family is spread out in the tribal areas of Afghanistan, the tribal areas of Pakistan, Swat Valley (hometown of the recent Noble Laureate, Malala Yousafzai) and Peshawar. He is fluent in Pashtu and Urdu. He was instrumental in gaining access to Maulana Abdul Aziz Ghazi for Among the Believers.

Hina Ali is a young journalist from Pakistan. A recent recipient of a Fulbright scholarship, she has worked with Oscar winning documentary filmmaker Sharmeen Obaid-Chinoy and BBC Media Action in Pakistan. She has eight years experience in broadcast journalism. She has studied journalism and documentary production from Arizona State University and University of Karachi.

Chris McCue has worked in independent documentary films for eight years. McCue first worked with Maysles Films for six years, first as Office Manager then Assistant Editor/Archivist. He was Post Supervisor on Muhammad and Larry (2009) and Associate Producer on The Love We Make (2011). After a spell living in beautiful Austin, Texas, he has returned to New York working as a freelance Editor and Assistant Editor. He writes mystery novels under the pen name Richard H. North. 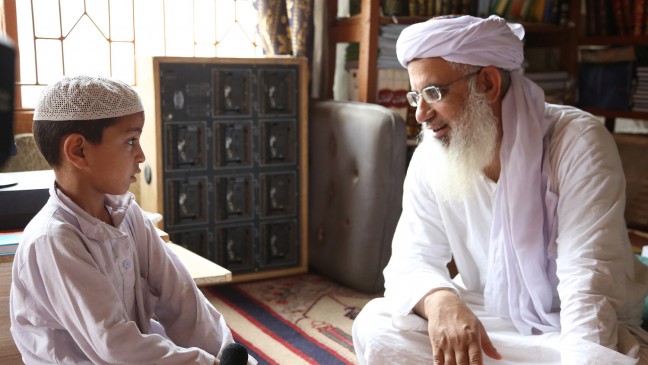 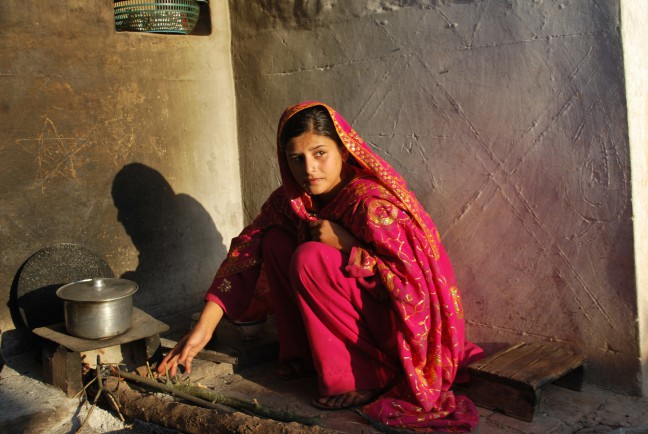 This program is funded by the Center for Asian American Media, through support from the Corporation for Public Broadcasting.