FILM: IN THIS FAMILY

A son revisits audio recordings of his home life in the aftermath of being outed as gay and recalls how his traditionally Catholic parents eventually embraced him for who he is. 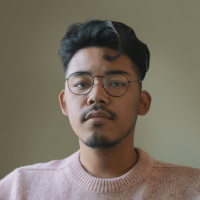 Drama Del Rosario is a Filipinx documentary filmmaker based in Los Angeles. He is the winner of the inaugural BAFTA-GSA Commissioning Grant in 2019 for his documentary, I’m Okay (And Neither Are You). He is also the winner of the Loni Ding Award in Social Issue Documentary at CAAMFest 2019 and was shortlisted for the BAFTA Student Film Awards in 2018 for his documentary In This Family. As a queer filmmaker, Drama directs documentary films that challenge the conservative Filipinx Catholic background that he grew up in. He has over a decade of experience in video production and has received numerous international awards from countries including the USA, UK, India, Australia, and the Philippines. Currently, Drama is directing I’m Okay (And Neither Are You), a documentary film about mental health and sexual assault trauma from the perspective of a gay couple. He also loves donuts and sausages.