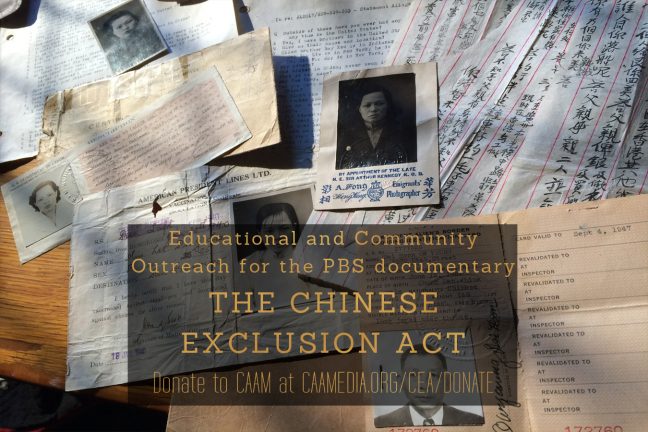 Too few people know about the history of the Chinese Exclusion Act of 1882. This was the first and (to date) only law that targeted and banned a specific group from immigrating to and becoming citizens of the United States.  Understanding the history and consequences of this landmark legislation is critical to understanding the American experience and how we define who can be an American and what being an American means.

THE CHINESE EXCLUSION ACT had its San Francisco premiere as the Closing Night presentation of CAAMFest 2017 in March 2017 to a sold out audience at the historic Castro Theatre in San Francisco.

The film had its national broadcast premiere on the acclaimed PBS series American Experience, on May 29, 2018 during Asian Pacific American Heritage Month. An estimated 2 million people across the nation watched the broadcast premiere.

As part of our efforts to educate more people and foster public understanding and dialogue about the history and impact about the law, we launched an educational and community outreach program in conjunction with the film. The program,  Who Is American? Immigration, Exclusion, and the American Dream, launched in August 2016.  In the first two years since launching this initiative, we have been overwhelmed by the number of educators, students, community groups and others who have reached out to us, asking for screenings of the film and the materials we developed to help groups organize screenings and conversations about the law and its continuing impact.

We are also so grateful to the 400+ community members from across the United States who donated in support of the initial development and launch of Who Is American?, making it possible for us to develop the community conversation kit, a beta version of the educational curriculum kit and respond to the hundreds of requests for these materials and screenings of the film.

Since launching this program, thanks to your support of “Who is American?”  together, we have:

This is an important opportunity for us to educate more people and communities about this history and facilitate conversations about the continuing impact of this law.  We can’t do this without your continued support.

Together, we can ensure that current and future generations know about the Chinese Exclusion Act and and its connection to the larger history of American civil rights, immigration, and culture.

Help us bring this important film and other stories about the Asian American community to all Americans and communities abroad by making a tax-deductible gift of $50 or more today to help us reach our goal of $75,000 to support our continued educational and community outreach efforts.

HOW YOUR DONATION WILL MAKE A DIFFERENCE

With your support, we will educate more people about this history by:

– Creating educational content (i.e. short videos, images, curriculum, discussion guides) that will be available to educators for free through our partner PBS Learning Media. PBS Learning Media is the nation’s most respected site for free high quality standards-aligned digital content, lesson plans and articles for educators, accessed by hundreds of thousands of educators each year.

– Distributing the educational curriculum kit created by our educator partners in California and New York, to students, teachers and community groups throughout the United States through our website CAAMedia.org/CEA

– Making the film accessible to millions of Chinese speaking community members in the United States and abroad by adding Chinese subtitles (traditional and simplified) to the film.

Together, we can ensure that current and future generations know about the Chinese Exclusion Act and and its connection to the larger history of American civil rights, immigration, and culture.

If you have any questions about CAAM’s educational and community outreach efforts and the film, we’d be happy to chat with you in-person, over the phone, or via email. Connect with us by contacting Jennifer Chu, Membership Manager at (415) 863 – 0814 x 102, jchu@caamedia.org.

DONATE BY CHECK, MAIL OR PHONE
Please make checks payable to Center for Asian American Media with Chinese Exclusion Act or CEA in the Memo field and mail to:

BACK TO: THE CHINESE EXCLUSION ACT