Thanksgiving has always looked a little different in my household.

While my parents initially attempted to follow the classic American script of turkey, stuffing and cornbread, it wasn’t long before we ditched some of the time-honored food traditions for dishes that felt more meaningful to my mixed Asian American family. Though we still enjoy some hand-picked “traditional” Thanksgiving foods like mashed potatoes and pumpkin pie, they are now plated next to my dad’s homemade Tandoori chicken and my mom’s classic fried noodles. It might be considered an odd meal to some but for me, my family’s Thanksgiving tradition is something special I look forward to each year.

Like many Asian Americans, cooking and food has always played an important role in my household and in my life. Food is at the core of so many Asian and Asian American traditions; it’s the hours of labor spent preparing a deceptively simple dish, the comfort meals that transport you to another time and the irreplaceable recipes that continue to be passed on generation after generation.

That’s why for this month’s Short Takes, we’re highlighting the recent Chef’s Table: Pizza episode focused on chef Ann Kim, who has created a career in which she is able to show up authentically as herself while paying tribute to her culture. See below for my thoughts on the episode and two other recommendations to check out this month.

One of the recent episodes from Chef’s Table: Pizza on Netflix shines a spotlight on Ann Kim, the award-winning chef behind Minnesota-based restaurants Pizzeria Lola, Hello Pizza and Young Joni. At the urge of several friends and acquaintances who thoroughly enjoyed the episode, I knew I had to watch and feature it in this month’s Short Takes.

The episode walks through Kim’s inspiring journey, and it’s a story that will likely resonate with many young Asian Americans also chasing “unconventional” dreams. After graduating from an Ivy League school and securing a stable 9-to-5 job, Kim found herself at a crossroads: she could continue making her parents proud climbing the corporate ladder or she could take a leap of faith and pursue her passion of acting in the theater. To the initial dismay of her parents, she bet on her dreams.

But around the age of 30, Kim found herself hitting a wall with her acting career. She recalls getting typecast as stereotypical characters and getting told she was “too Asian” or “not Asian enough.” “No matter how hard I worked, my destiny was someone else’s decision,” Kim says. This ultimately prompted her to leave the theater behind and pursue a new dream.

Kim had never cooked professionally in her life but when it came time to hone in on what she wanted to serve her customers, Kim turned to one of her comfort foods: pizza. But beyond that, Kim was determined to reclaim agency in her life and create recipes that were true to her Asian American identity. Her “Lady Zaza” pizza, for instance, combines delicious flavors of kimchi, pork loin, scallion and sesame.

I found the episode incredibly inspiring and in a way, distinctly Asian American. It was so refreshing to see Kim chart her own path and make a name for herself, all while staying true to herself and creating her own opportunities. Rather than shy away from her Korean American identity, she embraced it fully and is now sharing her culture and her food with the hundreds of guests that frequent her restaurants each day.

“My restaurants are a love letter to my mom and my grandma and my dad and all immigrants or anybody that feels like you can’t choose your destiny. You can,” Kim says. “And a Korean immigrant woman can make really damn good pizza.”

BOOK
Our Missing Hearts: A Novel, By Celeste Ng 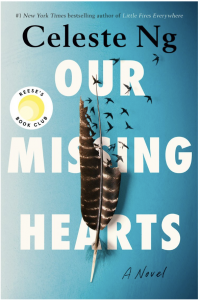 You may already be familiar with the work of New York Times bestselling author Celeste Ng, a Chinese American author who wrote the critically acclaimed books Everything I Never Told You and Little Fires Everywhere – the latter which was turned into a hit television miniseries executive produced (and starring) Reese Witherspoon and Kerry Washington.

Ng recently published her third novel titled Our Missing Hearts and it’s one I couldn’t put down this month. The novel centers on a 12-year-old boy named Bird who lives with his protective father, a former linguist who now works shelving books in the local university library. They live in a society governed by laws to “preserve American culture,” where “unpatriotic” books are confiscated and children of dissidents (especially those of Asian origin) are forcefully removed from their parents and then relocated.

It’s a beautifully written book that made me think a lot about the current state of our world as I was reading it. Apparently that’s no coincidence; in a recent interview with Seth Meyers, Ng explains how it was important for her to address anti-Asian hate head on in the book. And though the book presents a broken world that is consumed by fear and prejudice, the book actually ends on a more optimistic note. Ng tells Meyers that part of her process with this novel was figuring out for herself how to hold on to hope when it feels like the world around us is falling apart.

It’s a story that is very needed for right now, grappling with questions about how we can actually make a difference and how parents can teach their children to make the world better and keep hope alive. 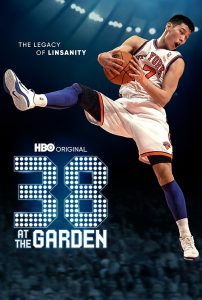 I’ll be the first to admit that I was never an avid sports fan growing up. However, even I know the legacy and significance behind the name Jeremy Lin.

Last month, HBO released 38 At The Garden, a new documentary chronicling Lin’s extraordinary rise to NBA stardom in 2012 and his lasting cultural impact on basketball and the larger Asian American community. The documentary features interviews from Lin himself, a couple of Lin’s former Knicks teammates and a handful of Asian American cultural icons including comedian Hasan Minhaj, journalist Lisa Ling and ESPN personality Pablo Torre. It’s through these interviews that we come to understand Lin’s background, his mind-blowing track record on the court and ultimately the significance of the cultural phenomenon now known as “Linsanity.”

I would highly recommend putting this documentary on your watch list, whether you’re a die-hard Jeremy Lin fan or you’re like me, and could count on one hand the number of basketball games you’ve sat through in a lifetime. It’s thrilling to relive the height of Linsanity and get a glimpse into just how special and important this time was for the Asian American community. Despite numerous people doubting his chance of success and despite the many obstacles blocking his way, Lin would go on to be the first Asian American to win an NBA championship and become nothing short of a living legend.

To many people, Jeremy Lin is more than just an athlete. He has shown what’s possible for Asian Americans when we have the courage to defy the odds and fight for our dreams. Hasan Minhaj sums it up beautifully when he speaks to Jeremy Lin’s legacy and why his story is so important for all of us.

“The reason why Jeremy matters and why we’re talking about it is, it represents possibility and an expansive worldview at the highest possible level,” Minhaj says. “If this is possible, what else is possible?”

Madeleine Fernando is a second-generation Asian American writer based out of New York City. A graduate of Northwestern University’s Medill School of Journalism, she is currently a public relations specialist and freelance writer.