Everything Everywhere All at Once, Turning Red, and other portrays of complicated families that are catching our attention

I have grappled with a lot of feelings this month as an Asian American woman: anger at the continued violence against Asian women in New York and sadness reflecting on the state of global affairs after the Russian invasion of Ukraine.

However, amidst all of these emotions and efforts trying to make sense of the world at a time of great turmoil, I have also felt glimpses of hope and empowerment this month through the power of Asian American media. Attending the San Francisco premiere of Everything Everywhere All at Once was a deeply heartwarming experience, and I felt proud to be Asian American that night. Watching Turning Red and witnessing the complex yet loving dynamic between Mei and her mother, I felt seen in so many ways that I never experienced from media as a child. And seeing continued achievement for Asian media at the 94th Academy Awards continues to inspire me.

Even in times of hardship and uncertainty, I continue to find healing, hope and inspiration in the works that are paving the path forward for Asian and Asian American representation. Below we take a look at four of these works in this month’s edition of “Short Takes.”

Everything Everywhere All at Once, Dir. Daniel Kwan & Daniel Scheinert

This sci-fi, action-adventure film stars legendary actress Michelle Yeoh as Evelyn Wang, an exhausted Chinese-American woman struggling in almost every aspect of her life. Her father’s health is gradually deteriorating, her relationship with her daughter (played by Stephanie Hsu) remains strained and her marriage with her husband, Waymond (played by Ke Huy Quan), is at a desperate crossroads after she is served divorce papers. And on top of that, Evelyn is dealing with every American taxpayer’s worst nightmare: getting audited by the IRS.

Directed by filmmaking duo Daniel Kwan and Daniel Scheinert (collectively known as “Daniels”), Everything Everywhere All at Once is wildly inventive, chaotic and hilarious, packed with over-the-top martial arts sequences, mind-boggling sci-fi elements and heartfelt commentary on generational trauma. Without spoiling too many plot details, it’s an incredibly ambitious project that also presents a very unique and interesting take on the metaverse. Honestly, it is quite a task to even try explaining everything this film entails in just a short blurb; it takes you on so many surreal twists and turns, to the point where you ultimately just have to surrender yourself to the directors’ creative whims and take it all in.

This film was meant to be seen on the big screen so if you can, I would highly recommend grabbing a group of friends and heading out to your local theater. Prepare to be taken on an absolutely bonkers ride with this one – and enjoy every minute of it.

My sister and I stayed up until midnight to watch Turning Red the minute it released on Disney+ on March 11. To say I had been looking forward to this film’s release would be quite the understatement. [Full disclosure: I actually interned at Pixar the summer of 2019 in the publicity department while Turning Red was still in production, so it’s safe to say I’ve been waiting to see this film for a long time.] The film is directed by Domee Shi, who previously wrote and directed Pixar’s beloved short film Bao, which took home the Academy Award for Best Animated Short Film in 2019. As a huge fan of Shi’s work, I had high expectations watching Turning Red – but I’m happy to report the film delivered everything I wanted and more.

Turning Red is a coming-of-age film filled to the brim with heart, awkward middle school crushes and 2000s-style boy band bops. I deeply related with the film’s main character, Mei Lee, a spunky and confident 13-year-old girl caught between the pressures of her parents while struggling to find herself in the transition period of her adolescence.

The film has been getting rave reviews (currently 94% on Rotten Tomatoes) and it’s not hard to see why. This is one of the most creative, hilarious and beautiful films Pixar has created in recent years. Shi and her team at Pixar really created something special with this one and I’ll be recommending it to every stranger I meet for the next year, I’m sure. 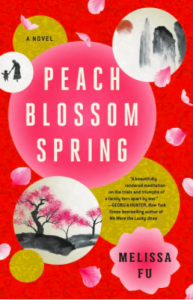 One book I’ve been excited to pick up this month has been Peach Blossom Spring, Melissa Fu’s debut novel. Peach Blossom Spring follows three generations of a Chinese family spanning several decades, from 1938 through the 2000s. The story begins with a young Chinese woman named Meilin, who is forced to flee her home with her four-year-old son, Renshu, when the Japanese army invades her village. The two travel as refugees across China, with only each other for company and a beautifully illustrated hand scroll filled with ancient Chinese fables which gives them hope and solace. Years later, Renshu earns a scholarship to study in America and later re-establishes himself as Henry Dao. Renshu attempts to suppress his Chinese heritage and the trauma of his childhood, despite the pleas of his daughter, Lily, who desperately seeks to better understand her heritage.

Peach Blossom Spring is a sweeping narrative that touches on larger themes of identity, trauma, sacrifice and the harrowing effects of war. However, Fu never loses sight of the emotions of the characters at the center of this story, allowing readers to deeply relate and empathize with them. The novel is also beautifully written, with lyrical passages that stay with you long after you finish reading. 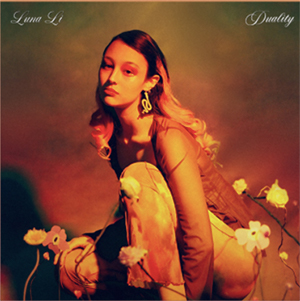 I first heard Luna Li when she opened for Japanese Breakfast at The Regency Ballroom in San Francisco last year, and I recall being mesmerized by her distinct melodies and stage presence. This made me all the more eager to listen to her debut album, Duality, which released earlier this month.

Luna Li (whose real name is Hannah Bussiere Kim) tackles feelings of loneliness, belonging and nostalgia on the album, which Bussiere Kim worked on for nearly four years. The singer-songwriter deftly combines her dreamy vocals and layered instrumental arrangements to create something of a celestial dreamscape. Some standout tracks include “Cherry Pit”, a fun and nostalgic song about leaving childhood spaces behind, and “Afterglow”, a soft and reflective track about a faded friendship.

Duality is a fitting name for the 13-track project, which Bussiere Kim says holds many meanings. In an interview with NPR earlier this month, the artist explained that the name “Duality” initially stemmed from a conversation she had with her producer, who pointed out that many of the songs on her album didn’t have just one theme or emotion.

“I was doing a big brainstorm for album titles in my notebook, and the word ‘duality’ came up. And as I was thinking about it more, I realized how much it really applied to my identity,” Bussiere Kim told NPR. “First of all, my musical identity, with trying to blend my classical background with these newfound rock and pop and R&B sounds that I was exploring, but also my heritage being half Korean and half Canadian and trying to learn how to balance those two worlds and parts of myself growing up.”