Asian American representation, yellow face, and homophobia may feel like the topics of the day, but filmmaker Arthur Dong has been addressing these conversations for decades. Now seven titles by this Oscar-nominated, Peabody and Sundance Award winning documentary filmmaker have the honor of being streamed through the Criterion Channel, the online platform known for curating the canon of classic and contemporary cinema. Titled Stories of Resistance: Documentaries by Arthur Dong, this will be the first time all these films will be available together to a broad audience, and the first time the streaming service has presented a retrospective by an Asian American documentarian.

While it may seem like these discussions have gained traction in recent years, the online release of these documentaries—originally produced from 1982 to 2015—acknowledges that recent gains are rooted in the years of work by Asian American creatives. “We’ve been talking about all this for decades,” says Dong. “So if my films are able to provide a historical context to these current conversations, that means I’ve done my job.”

This experience was a reminder to Dong about how crucial it is for filmmakers to preserve and archive their work. He learned this lesson the hard way back in 1996. For Living Music for Golden Mountains, his first student documentary at San Francisco State University, Dong shot footage in 1970s Chinatown—interviewing his music teacher and capturing bachelor society living in SROs. The reels were temporarily packed in underground storage in LA. “I had stored the elements in cardboard boxes in what I thought was a safe place,” he recalls. “But when I came to pick them up, termites had decimated the cardboard, and the droppings went into my film elements. It was all gone.”

Fortunately for the rest of his work, the UCLA Film & Television Archive approached him in 2013 to safely store other essential elements of his films in what is now The Arthur Dong Collection at UCLA. “It was like saying goodbye to my babies,” says Dong. “And I’m glad I did, because it took me a long time to organize all the essential elements of my productions and put them in boxes for them to take away to store in climate-controlled vaults.” 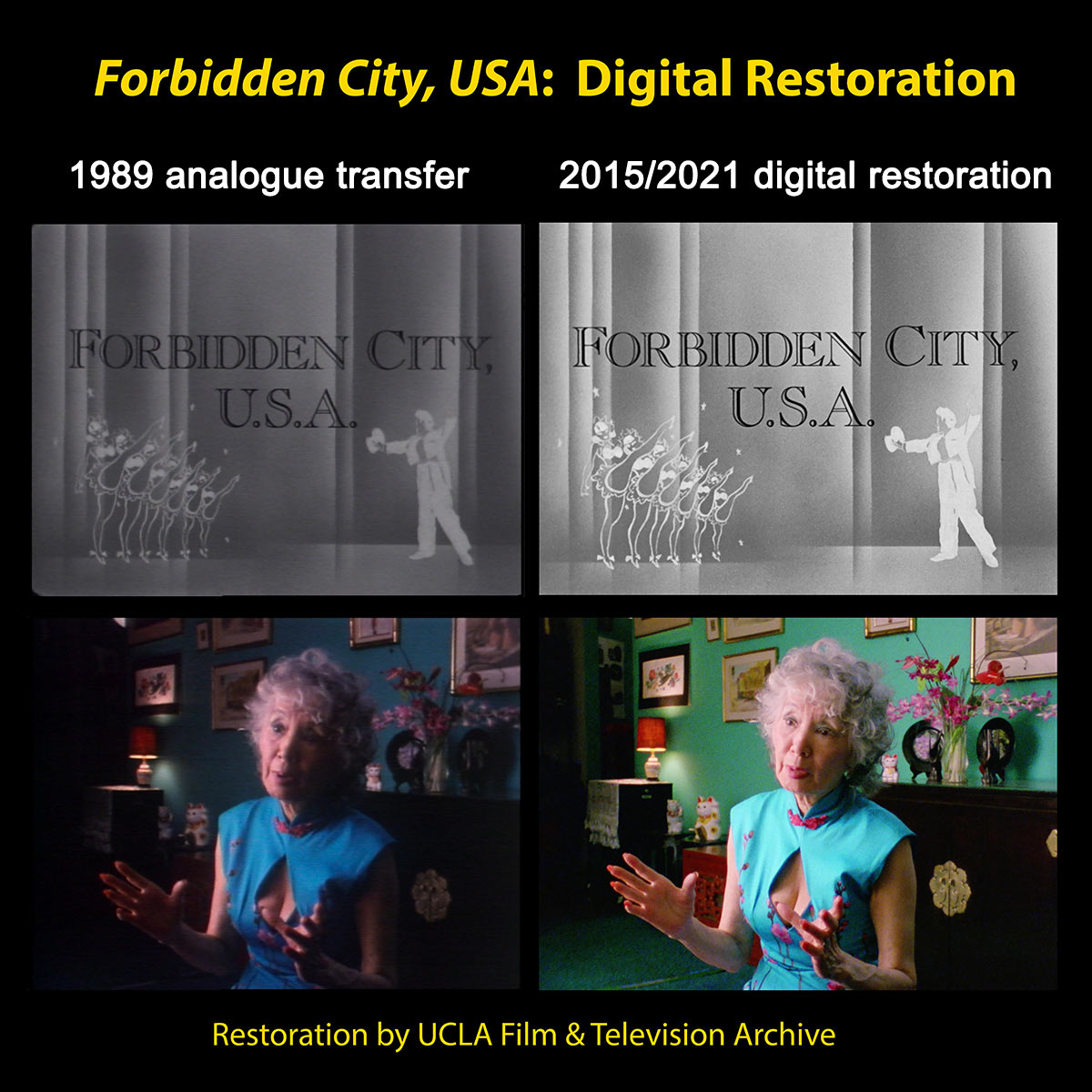 When CAAM featured Dong as a CAAMFest 2015 Spotlight honoree, he worked with UCLA to restore his 1989 documentary Forbidden City, USA, originally shot on 16mm. “And it was thrilling, because I was able to really get the colors I wanted.”

For the Criterion Channel, Dong refined Forbidden City, USA even further. The film documents a 1940s San Francisco nightclub. Melodies from the era set the scene, but also posed challenges. Licenses for six songs had to be cleared, requiring a costly renewal process every few years in order to screen the film. Using a process called digital audio isolation, those tracks were removed and replaced with original scores in period style by composer Gary Stockdale. Because he kept the footage from his original shoots, Dong was also able to use outtakes of performer Frances Chun singing a song from that era. “By this time, The Man I Love copyrights expired. It became public domain,” explains Dong. “She sounds great, and she’s accompanied by  David Sum, who was an old-time vaudeville piano player.

UCLA Film & Television Archive and IndieCollect helped with the restoration of Sewing Woman and Coming Out Under Fire, as well. As Dong prepared Licensed to Kill—his film on murders of gay men—for modern audiences, he was faced with a personal artistic dilemma. Produced in 1997, the film documents the aftermath of murders motivated by homophobia and included graphic crime scene photos. “It was a very definitive choice to show them in 1997, because I wanted the viewers to understand the results of these crimes,” said Dong. But nearly 25 years later, with a public that’s desensitized to violence, Dong decided to blur out those images. “Do I now change my artistic vision that I had 25 years ago? Do I answer the call in my heart to show this film in a different way? And I chose to do that.”

The Arthur Dong retrospective comes after Criterion was criticized in 2020 for a relative lack of diversity. Advocating for better representation has been part of Dong’s work for decades.

He was part of the first Asian American film festival in Berkeley in 1982, which later evolved into CAAMFest. And since 2017, he has served on the Academy of Motion Picture Arts and Sciences’ Museum Inclusion Advisory Committee, along with Janet Yang, Marlee Matlin, Whoopi Goldberg and others. This month, their advocacy is reflected in the newly opened Academy Museum of Motion Pictures in Los Angeles. Dong says that the artifacts of Asian American filmmaking on display include: “original drawings by Tyrus Wong, an original model by Wah Ming Chang, original audition Polaroids of The Joy Luck Club cast, speeches by Academy Awards Oscar winners on video screens, a Bruce Lee section with artifacts like posters, nun chucks and a costume, Max Factor pan cake make-up labeled ‘Chinese’ for yellowface applications, original yellowface makeup instructions by William Tuttle for yellowfacing Katherine Hepburn in Dragon Seed, and so on and so on!”

Stories of Resistance: Documentaries by Arthur Dong will be available for streaming on the Criterion Channel through March 2022.