If there is a Godfather of Asian American blogging, it is Phil Yu—a.k.a., Angry Asian Man. Yu, who runs the 20 year-old blog and brand mostly solo, is very much an institution.

What many may not know is that Yu spent some of his formative years at the Center for Asian American Media. The summer after his junior year of college, Yu was the web and communications intern at the National Asian American Telecommunications Association, now known as CAAM.

Yu, a film major in college, says that “college was a time where I started to form an Asian American political identity.” He attended Northwestern University in Illinois and began taking Asian American studies courses; the internship at CAAM melded his interest in film and Asian American media.

CAAM seemed “like a pretty good place to get plugged in,” especially for Yu, who is Korean American and grew up in the South Bay.

Yu said that being among a community who cared about Asian American films exposed him to the independent film world beyond Hollywood. “People who were on the ground independently, they’ve been laying the groundwork for their community to grow.” He notes that the film festivals and NAATA were places where people could talk about making Asian American media. “Not only has this work been happening, but had been long happening before I started,” Yu added.

Yu joined as a staff member at CAAM in 2001 and stayed for three years, helping NAATA re-launch its website during the blogosphere’s nascent years.

“He was really instrumental in supporting our nascent web presence,” said CAAM’s Director of Programs Donald Young, adding that this was before social media was widespread. “It was really the early efforts of—not just ours but the whole community—expressing ourselves in the web and digital spaces.”

Yu came on staff spring 2001, just a few months after launching Angry Asian Man. The blog is known for posting news and culture stories where Asian Americans play a pivotal role, or announcements and analysis of new shows featuring Asian American characters. Yu also re-blogs important news stories on Asian American culture. Some posts also point out overt racism seen in the world or in media, with the brief “That’s racist!” line. In many ways, it’s a living history of everything going on in Asian America for the past 20 years.

The name of the blog came from the idea that “angry” and “Asian” together felt like a conflicted notion. “It initially felt humorous, like the idea of a hyper-militant, outspoken Asian person was kind of silly. But then I started to question, well, why? Like, why aren’t Asians allowed or expected to be angry? I think the name of the blog was a provocation. When you see the name of the blog, you’re intrigued or you get it, or you’re bothered, or you laugh. It’s not something you can be neutral about,” Phil says.

Journalist and A. Magazine founder Jeff Yang (and dad of Fresh Off the Boat star Hudson Yang) says that he had been following Yu’s work before they met in person.

“I followed [Angry Asian Man] early because it rose up on the heels of A. Magazine folding and quite honestly, it comforted and excited me to see that the torch of covering Asian American issues and lifting up Asian creators was in the safe hands of someone as talented and passionate and funny as Phil.”

Tess Paras, a director, comedy writer, and an actress known for her work on Crazy Ex-Girlfriend and Just Add Magic, says that when she first read Angry Asian Man, “I was studying mass media and communications, so it blew my mind to see that someone had a critical eye on AAPI portrayals (or lack thereof) and I really looked up to him. Someone was as angry as I was? And writing about it publicly?” Yu later featured Paras’ comedic sketches, and they have become friends since.

New Book: Rise: A Pop History of Asian America from the 90s to Now 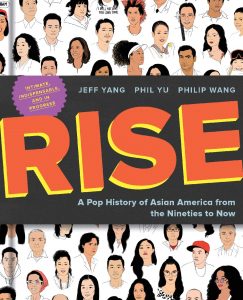 Yu, Yang, and Philip Wang (of WongFu Productions) collaborated on a new book, Rise: A Pop History of Asian America from the 90s to Now, that will be published in January 2022. It’s Yu’s first book project. He is looking forward to its launch, partly because the book’s topic touches on ideas that are close to his own upbringing.

“This is the period in which we came up,” Yu, who is 43, says. The book details pop culture moments by decade over a 30-year span.

The authors do note upfront that they are three East Asian American men writing about Asian America. However, they bring on many contributors from various Asian ethnic backgrounds to help write the book as well, including Tess Paras, Anida Yoeu Ali, Diana Nguyen, and many others.

The book came about from a late-night discussion, partly spurred by the rise of anti-Asian hate and COVID.

“All of our gains from recent years were suddenly in deep freeze and there was a rising tide of anti-Asian violence and bigotry,” Yang says. “And key people in our histories were passing away. If we had to rebuild from scratch, we needed a blueprint.”

The book is colorful, full of noteworthy contributors and illustrators, and is 400 pages long, but can be digested in small doses. From gathering the entire case of Better Luck Tomorrow to mapping U.S. locations where significant Asian American historical events and moments took place, it’s chock-full of entertaining and enlightening information. And, of course, there is an homage to the Asian American film festivals.

Paras is one of the forthcoming book’s contributors, sharing a comedic piece on AAPI fashion in recent history and producing a photoshoot to accompany the piece. She notes that Phil was down-to-earth in person: “on set for the shoot that day, Phil was what he is—collaborative, validating, respectful and appreciative of everyone’s contributions.”

Watching the Trajectory of Asian American Film and Media

Since Yu has been following Asian American media, trends, and popular culture since 2001, I asked him what he thinks about where Asian Americans are in media right now, and where we are headed. Yu has an MA in Critical Studies from USC’s School of Cinematic Arts, and also executive produced the film Awesome Asian Bad Guys, featuring National Film Society’s Patrick Epino and Stephen Dypiangco.

Yu notes that while there have been many big milestones, overall change has been very slow. He was in high school when The Joy Luck Club (dir. Wayne Wang, 1993) came out, “and that seemed like a big deal.” While he worked at CAAM, Better Luck Tomorrow (dir. Justin Lin, 2002) came out, and that again, was a big deal.

“You kind of begin to see that there’s not a silver bullet moment,” Yu says. “Trends come and go in Hollywood. What I’ve seen is the film festival circuit is where people are really passionate about it and find the stuff that’s great and support it perennially. It doesn’t happen to be the big Hollywood blockbuster. There are things that move the needle constantly and in a thought-provoking way.”

After moving to L.A., Yu joined the board of directors of Visual Communications in 2010, which started the first Asian American film festival in the country, just before SFIAAFF. For five years, Yu was a part of the short films programming. He saw every film that came through their open call curation process. “That was awesome. The thing about shorts is that there’s a lot of bad stuff that comes through open call, but there’s a lot of great stuff too. You get to see early works of clearly talented [filmmakers].”

Yu has been a part of the conversation on Asian Americans in media and pop culture for the last two decades. It’s no surprise, then, that he is a part of it now, with the latest huge moment in Asian Americans in Hollywood: a Marvel movie. Yu penned a cover story—no big deal—on Simu Liu and Shang-Chi and the Legend of the Ten Rings. He has written journalistic stories before, but to land a cover story for Entertainment Weekly was still a milestone in his career.

The editor sought Yu out to write it. And he said yes, because it was a great opportunity, and because it was something he knows a lot about. Marvel comics. Asian American representation in Hollywood. And, it helps that Yu knows Liu too.

The article (which Yu is quick to note that the editor put in magic touches to make even better), is a blend of geeking out on comics, bringing out Liu’s personality and voice, and bringing up thought-provoking questions. Because, just as Yu is good about pithy re-blogs and concise commentary (“That’s racist!”), he is also analytical and thinks beyond the surface level.

What I appreciated the most is Yu’s questioning of the role of martial arts shows and movies on the American mind. The most famous Asian or Asian Americans to the mainstream are Jackie Chan and Bruce Lee. Would Shang-Chi have the same success, and does martial arts once again play a role—and a stereotypical one? What does this film mean, coming out on the heels of a tragic, hurtful, traumatic year of anti-Asian hate and COVID?

“When the world is telling us, ‘We hate you because you’re Asian, we hate you because we think you brought this virus to the world’… we need to kind of meet that with an equal and opposing force,” says Liu. “That is celebration. That is joy. That is pride. It’s hard enough to celebrate being Asian in normal times. But now, when the whole world is kind of coming down, with all this rhetoric and people getting attacked on the street, you really need to deliberately try to celebrate Asian-ness. And that’s what I think this movie is — a celebration of our culture.”

What Next For Phil Yu?

Besides the new book, Yu continues producing his podcast with Jeff Yang, They Call Us Bruce, which started in 2017.

Yu also recently launched a new podcast. The man is always full of ideas, but doesn’t always have the time and capacity to see all of the ideas actualize. The new podcast focuses on all the Asian Americans on Star Trek. “It’s the most specific and nerdy thing I do,” Yu says.

Who knows what new ideas Yu will come up with in the next decade? Donald Young of CAAM notes that Yu was always an innovator. “It feels like the beginning of a lot more great work,” Young says.

Jeff Yang agrees that his oft-collaborator has staying power, in part due to his work ethic and personality. “His dedication and persistence, his willingness to step up and stand up at times when our community really needed a rallying call, and his sneaky sense of humor all really have set him apart. People survive and endure for a reason.”

Paras adds that Yu is truly about and for the community, and amplifying others’ work. “There weren’t that many Filipina sketch comedians putting out content at the time and he truly helped me amplify my work,” she said. He later invited Paras to be on a panel for Angry Asian America. “I can’t stress enough how as AAPI media grows, I often feel that the Filipinx diaspora is left out of the conversation. Being included by Phil in any way always means a lot. His platform boosted so many others and that has a huge ripple effect on who we’re seeing grow today.”

2021 marks the 20-year anniversary of Angry Asian Man. Yu credits the larger community for his success. “It’s been so cool being on this journey with all of us,” Yu says. “And it mostly has been change for the better.”

Momo Chang is a freelance journalist in the Bay Area and the former Content Manager at CAAM. She works at Oakland Voices—a community journalism training program and a part of the Maynard Institute for Journalism Education.