“Staying in the South is an opportunity to be part of a wave of Southern storytellers coming from a perspective that hasn’t been seen much on the national level. “

Mediamaker Saleem Reshamwala believes there are many paths to creative success and he wants to explore as many of them as possible. His LinkedIn bio reads: “I travel the world and make things with crazy teams of amazing freelancers. Mostly videos.”

At the age of 41, Reshamwala has a diverse and impressive collection of experiences and achievements. He is the host of the TED Far Flung podcast, exploring ideas around the globe. He photographed a garbage dump in Easter Island and filmed food activists in Tahiti. He’s filmed rappers and beatmakers in Senegal, Ethiopia, Fiji, Panama and Congo for PBS’ Beat Making Lab series. He’s worked at a chemical factory in Mexico. All in all, he’s lived, worked, created and played in about 50 countries and traveled twice around the world by boat.

“I think it’s important to be really open to the many paths to make creative things exist in the world,” Reshamwala said. “You won’t have fun all the time, and sometimes to get by you have to do some very not fun things. But if you’re not really engaged with the process for a pretty significant percent of the time, then that path isn’t worth it and it’s time to explore other paths.”

An intrepid explorer of ideas, spaces and collaborative opportunities, Reshamwala charts his own maps and follows his heart. And it pays off in satisfaction and accolades. His recent awards include Best Music Video at the Hip Hop Film Festival in Harlem (for G Yamazawa’s North Cack) and an Emmy-nomination for his work on implicit bias and race while at the New York Times.

His new short film Van Sanctuary, which was filmed with safety measures during the COVID pandemic, can now be viewed on Facebook or Instagram, as part of the Becoming America digital shorts anthology.

The beginning of the journey

Growing up in Cary, North Carolina, Reshamwala’s parentage – his mother is a mix of Japanese and white origins and his father is Indian – made him the “ethnic kid,” an outsider looking in. This status of not belonging to any one group, enabled him to move through and connect with people from different communities.

After graduating from the University of North Carolina in 2000, Reshamwala moved to Queens, New York, and worked several jobs to make rent. One job was at a Blockbuster Video, where conversations with co-workers made him realize how many people’s wages were so low that they were “just one step away from life disaster.”

It was an eye-opening moment for him. “It totally changed my perspective on work and life and how a lot of ideas about the American dream weren’t real, at least not in the way I’d heard them,” Reshamwala said.

After September 11, 2001, varied threads from his background came together in unexpected ways. When the U.S. started holding Muslims at Guantanamo without trial, some of the strongest protests came from the Japanese American community, many of who vividly remembered the Japanese American internment camps of World War II.

He moved to Japan in 2004. He lived and worked there full-time until 2009, and then traveled in and out for a couple of more years. “Before I went there, a lot of my humor was ironic, or alluded to pop culture,” Reshamwala shared. “But in Japan, as a person without cultural touchstones or linguistic nuance, I really shifted my personality.”

He developed an appreciation for a more surreal take on life and humor, and grew more comfortable with silence.

All of these life experiences add to his perspective. “I started to see the benefits of sharing experiences as an Asian American community,” Reshamwala shared in a piece he wrote for CAAM in 2018. 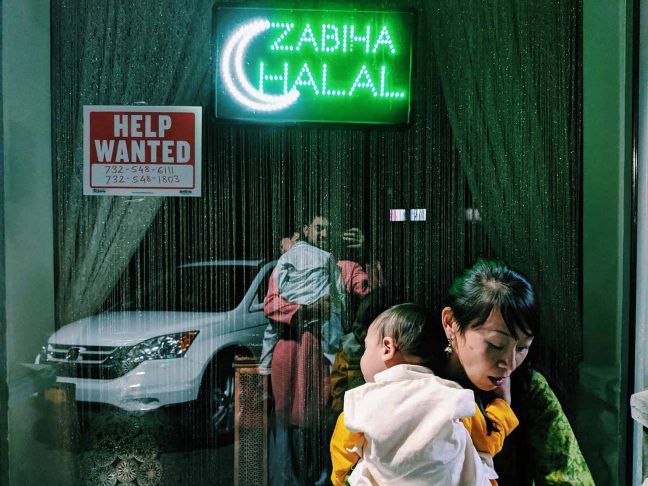 He married his Japanese girlfriend and co-creative, Mana, in 2012 and settled down in North Carolina. In 2013, he launched his own video production company called KidEthnic, a nod to his childhood.

Despite shifts in U.S. demographics, many Asian American creatives can feel isolated in the South. Reshamwala also sees opportunity.

“I’ve lived in Brooklyn in the past myself, but living in N.C. keeps me close to stories (and characters) I grew up around,” he shared with CAAM in 2018. “Staying in the South is an opportunity to be part of a wave of Southern storytellers coming from a perspective that hasn’t been seen much on the national level. And even though it can feel a little isolating, you’re forced to learn creative ways to tackle all aspects of filmmaking, often teaming up with non-filmmakers and playing multiple roles.”

Reshamwala is involved with several initiatives that support diverse filmmaking in the South, including serving as a mentor for The Sauce Fellowship, a Southern youth digital storytelling program in conjunction with the New Orleans Video Access Center (NOVAC).

He loves the immediacy film offers. “Everyone knows immediately and viscerally whether they connect with or enjoy or are affected by a video,” he said. “I got really addicted to just making things that I could show people and have them respond so immediately, like it or not.”

He has several exciting projects in progress.

This fall, he has five new episodes of Far Flung, his travel podcast about journeys across the globe in search of the world’s most surprising and imaginative ideas. He is working on a CAAM-funded documentary series called Raised by Restaurants featuring children who grew up in restaurants owned by Asian American families. He is also releasing some short documentaries about the experience of Muslim musicians visiting North Carolina. Then there are the long-term dream projects: a surreal puppet film about a young Muslim kid exploring the underworld and a short film centered on skating rinks.

While it may seem like he never runs out of ideas, Reshamwala does have moments where he needs to stop and replenish his creative energy.

“Every once in a while, I’ll realize that my brain is kind of empty, or just stuck in weird loops (check email, check social media, feel awkward, etc.),” he said. “When that happens, I log off all social media for a while. Take long walks at night, read more, draw. I’m not great at drawing, but whenever I’m stuck, I’ll switch to storyboarding rather than writing.”

At the moment, he has a table covered in index cards for a project. He turns off his computer once a day and forces himself to work on the index cards.

“If I write or draw anything on 20 index cards, then I get a break. The physical world always resets me,” he said. “I also just try to switch mediums when my brain is fried. Lately, including my kids, ages seven and two, in weird side projects has been really fun.”

Once replenished, Reshamwala dives into projects, short-term, long-term, old and new ones.

“I love working on projects where I’m genuinely trying to figure things out. I want the project to be a sketchpad or a research process that lets me try and figure something out about the world, or whether something will work or not,” Reshamwala said. “I like to try to make something happen that hasn’t happened before, or have people meet on set who probably would never have met otherwise.”

Read about other featured storytellers and learn about CAAM’s 40-year legacy of fearless storytelling at CAAMForward.com.