During the second day of the Filmmaker Summit: Work from Home Edition, some powerhouse Asian American creatives shared their personal experiences in developing the narratives that drive their documentary films and also how they found funding to bring those ideas to the screen. 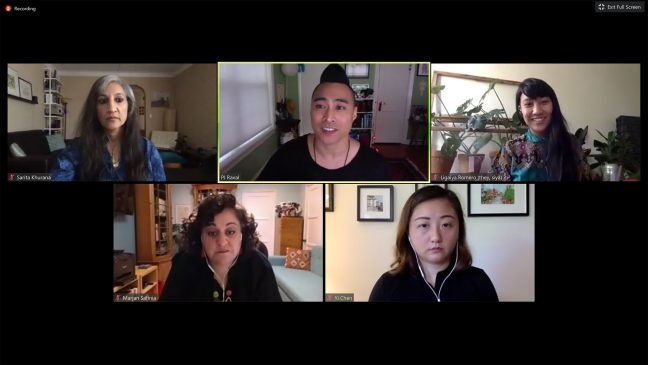 The day’s first session was a lively exchange between doc directors with projects at various stages, from early development to an upcoming broadcast and even one with a film that would be playing at CAAMFest online that evening.

Moderator and fellow filmmaker PJ Raval asked all the juicy questions about the long and winding road of documentary storytelling, beginning with an analogy of casting subjects to blind dating. The caveat being “one person [the filmmaker] has been stalking the other person hardcore online first,” said director Marjan Safinia (And She Could be Next), with a laugh. Her nickname for the process is “crasting,” because “it’s crass to talk about casting with real people, but it’s so important!”

All filmmakers acknowledged that finding the right subjects for your film can take a lot of interviewing and a lot of time. Yi Chen (First Vote) said she spent six months looking for the right characters who were willing to be filmed. Once you have your characters, how do filmmakers maintain that relationship?

The panelists spent anywhere from one election season up to four years following their subjects, and “throughout that process, you‘re constantly communicating, ‘This is where we’re at, this is what we’re trying to film,” said Sarita Khurana (A Suitable Girl), who has also shown clips to her subjects along the way to help them understand her process.

The question of the filmmaker-subject relationship prompted emerging filmmaker Ligaiya Romero (Not Your Model Minority!) to reflect on standards beyond legality: “What would it mean for us to incorporate consent practices that were more in line with our sexual and romantic practices? Consent that is affirmative, enthusiastic and continuous. So even if you got a ‘yes’ at the beginning of the project, and the person would change their mind, you would respect that.”

If the direction of the story evolves, Chen checks with her subjects “to see whether or not it aligns with what they want to do.”

You “have to just respect people who say no,” said Khurana, who acknolwedged that sometimes projects meet their end at that point. Or you may fall in love with a participating character, “but they just aren’t going to work well on camera,” Safinia added. “You have to be willing to let go.”

As a story twists and turns, it can be challenging to maintain your confidence as a storyteller. The process is “riddled with self doubt all the time,” Safinia said.  “Some days you wake up, and you’re super clear and super adamant. And then you have one person that says something to you and think, ‘Oh my God, I’ve got this all wrong!” But her years of experience have helped her hone and trust her instincts.

Risk is an important part of that process, Khurana said, noting that doubt for filmmakers is often rooted in a feeling of scarcity and limited funds. She’s learned, however, that “if we don’t risk it and we don’t spend this little bit of money and expect that we might fail, we’ll never figure it out.” Taking chances is “how you build that confidence and you build that trust in yourself,” she said.

In addition, finding the right collaborators can be key to a film’s progress. Chen and Safinia praised POC networks like A-Doc and Brown Girls Doc Mafia for connecting them to like-minded producers, editors, and crew members. “The best thing to do is insert yourself in the community, pipe up in these spaces and build relationships,” said Safinia.

“A lot of it comes down to your values and the perspective that you bring to the film,” Romero added. Making it clear why you are telling your story makes it easier to find collaborators who share your values and vision, too. 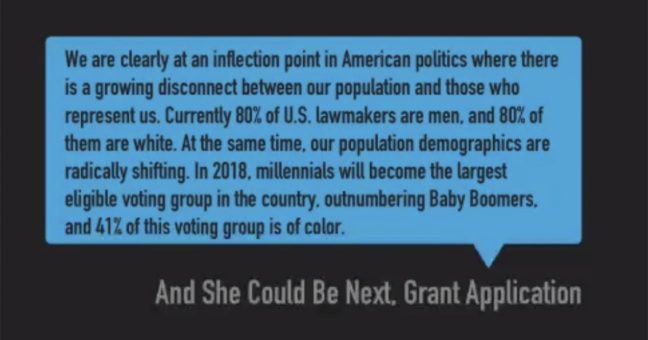 Once you have your story idea, and perhaps a few potential characters, it’s time to raise the funds. In the second session of the day, Dana Merwin from the International Documentary Association (IDA) spoke with grantees Grace Lee and Marjan Safinia about their successful 2018 Enterprise Documentary Fund grant application for And She Could be Next a two-part docuseries which airs on POV on June 29 and 30.

A great application starts with communicating a clear vision for your film. Here’s the grant-winning logline:

And She could Be Next is a poignant and urgent feature-length documentary about women of color claiming their political power in 2018 by running for elected office. In Trump’s America, these women have the potential to become the most surprising, transformative, and unstoppable force changing the face of American politics. The film is made by an all women of color creative team.

Here are a few takeaways from the session

Raising a hefty $2.2 million budget (yes, you read that right!) for a two-part series was a daunting challenge. The first money was  received from a private funder through a personal relationship Lee and Safinia had cultivated—but they did assure the funder, at the very least, that the money would be used for a short film if a series didn’t pan out. “There’s no way we would have raised this money had we not spent 20 years in the field prior building these relationships,” Safinia said. The moral? Start now. For emerging filmmakers, getting to know and connecting with funders “as people” out in the world whenever you can pays dividends down the road, “not just when you’re submitting your [application] at the deadline hour,” Safinia said. And that includes distributors, too. “We categorize these people in an ‘ivory tower’ sort of way,” she said, “but they’re just people.”

You will go through many iterations of your written materials. Some character and story details Lee and Safinia submitted to IDA didn’t ultimately end up reflected in the film given the unpredictability of political campaigns. “You’re constantly writing,” said Lee. Even now, “we’re still writing our synopsis over and over again.” It’s also helpful to have different versions or even blocks of text that can be swapped out for different grant applications or funders. “We have another [logline] that talks about the dual forces of white supremacy and patriarchy,” Lee said. “We’re always adjusting based on what we research about the grant [or funder].” Lee and Safinia spent many late nights collaborating in Google Docs, turning “word salad” into concise copy.

As a reviewer, Merwin added, “We highly encourage people to read their material out loud.” It should sound like something “a real person” would say, rather than “a thesaurus of words”!

When it comes to money, always put yourself in the budget and “never put some stupid number you can’t survive on,” Safinia said. She admits you’ll likely work more hours than you can raise money for, “but you know what your value is.” She and Lee put in flat fees for the duration of the project, spread out over pre-production, production and post-production. “Ask for what is a reasonable amount of money for a person of your skill, your talent, your experience that you need to make in order to pay your rent and send your kids to school, fill your fridge and make your car payment,” Safinia said.

Not underselling themselves and their crew was also a matter of principle. “Because we’re talking about women of color who are always undervalued, it was important for us to make sure that everybody got paid what they’re worth,” Lee said. The entire creative team was comprised of women of color, and they had multiple crews across the country following the 2018 election season. Their larger budget often required educating funders “why this is a worthy subject matter and deserves the budget that it has,” Lee said. “Working on this project is like our own political campaign!”

Kiss a lot of frogs

Rejection is ongoing and plentiful. “I’ve been rejected so many times,” said Lee. “I’m so used to being rejected, it’s just like whatever! Move on to the next one!” Don’t take it personally, stay determined, and remember that “a ‘No’ is only ‘No’ for now,” added Lee, mentioning that grants can take multiple tries (and years) to get.

Many people along the way also “just didn’t get the vision” and argued that “there are a lot of other projects like this out there,” said Safinia. “You have to kiss a lot of frogs, you have to find the people who fit with your project, who believe in you and believe in what you are doing.”

Make the thing you want to make

As women of color themselves, Lee and Safinia integrated their personal desires to champion other women of color into their grant writing. “We’re taking a stance and saying, ‘We are making a political story that centers race and gender,’ and that’s not something a lot of people are comfortable with,” Lee said.

Some wondered why the film couldn’t focus more generally on all women. Especially when politics are involved, funders may also voice concern about a filmmakers’ “stance.” But “if they didn’t get us, it was just a reflection of why this project needs to be made,” Safinia said. She emphasized that a strong “point of view” and “advocacy” are two distinct concepts. “I have a strong point of view in the world which is that we need more women of color in positions of leadership and we need to recognize the struggles of communities of color in this country,” she said. “That is not an advocacy position, it’s a point of view. An advocacy position is ‘We need to elect this person,’ or ‘We need to pass this piece of legislation.’”

Leaning into your personal connection to the subject matter can also be the strongest part of your application, Lee said. “It has to come from your gut and your heart.” Her own experiences reviewing grant applications have taught her that the most successful are ones that make you think, “Yes! I need to see this film, made by this filmmaker!”

Lauren Kawana is an independent documentary filmmaker based in Oakland, CA. She is a member of A-Doc, BGDM, and serves as the President of the Asian American Journalists Association, SF Bay Area Chapter.