CAAM’s Filmmaker Summit: Work from Home Edition kicked off on May 14, not in a theater packed with fellow film lovers, but on Zoom, with over 100 media professionals watching tiny computer screens—pajamas welcome.

At the start of 2020, Director Ramona Diaz was premiering her documentary film, A Thousand Cuts, to eager audiences at Sundance Film Festival. Then came what Diaz calls “the week the world turned.” When South by Southwest announced its cancellation, “I knew then, it was over,” she said. “Everything fell like dominos.” One by one, film festivals made hard pivots to cancel or present their films virtually, leaving filmmakers scrambling to reimagine their distribution in the time of COVID-19. Diaz said she observed what the festivals were doing and waited for news from the Academy of Motion Picture Arts and Sciences before making any decisions about continued distribution. A Thousand Cuts will be participating in the upcoming Hot Docs online festival. She urged filmmakers to keep reaching out to festivals, asking questions, and having conversations with others about their strategies.

“It’s a rollercoaster ride. Some days I’m really positive and enthusiastic and other days, not so much,” Diaz said. “It’s tough to be creative.” Even so, she’s started working with other filmmakers all over the world on a collection of short films to showcase the diversity of COVID-19 experiences. “We’re documentary filmmakers. This is what we do, we try to bear witness to the moment,” Diaz said.

As the summit progressed, I realized: while filmmakers could no longer congregate in a physical space, there was still so much to share and learn from one another. In a time when it’s easy to be overwhelmed by what’s not happening, it felt more important than ever to fill the void with community.

Director Yung Chang also turned to new creative projects when the theatrical and festival releases for his film, This is Not a Movie, were postponed. After going through “the five stages of grief” of a changed world, he and his partner decided to collaborate on a short film, We Are in This Apart, a reflection on life in quarantine. Spending all of his time at home with his partner, an artist and puppeteer, forced them to “think outside the box, in the box,” he said. He is now pursuing another film idea about the pandemic, which has received grant support from CAAM. 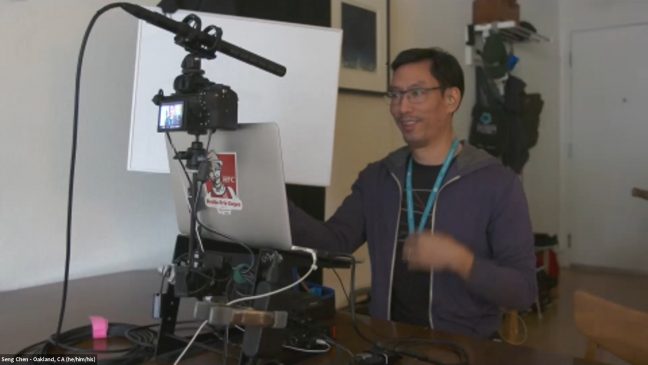 But the question of when to return to production and how, is on everyone’s minds. Crew members like director of photography Seng Chen are doing their best to weather this dry spell. Like a true professional, Chen demonstrated an enviable Zoom set-up with a DSLR and other tools, outlined here in his blog post. Filmmakers are debating whether they should send similar kits to their subjects to continue documenting while physically distancing. But Chen is quick to remind filmmakers: “It doesn’t replace a DP.” He said he also worries about the ethics of putting a crew person at risk if a subject may need to help with a complicated set-up, urging filmmakers to think about the long term impacts of their actions. If a decision is “driven by saving money, it’s not going to make our communities stronger or more sustainable,” he said.

As a commissioning producer at Al Jazeera Witness, Poh Si Teng is constantly helping filmmakers think through decisions about filming. “It’s been nonstop at work at Al Jazeera. We still have a lot of projects underway,” she said. “It’s really taking the time to listen and to assure people that funds are still coming, and to talk about their day.” A lot of productions are currently on hold. “If you’re filming right now, there’s always going to be a risk…a serious risk, a threat to life,” Teng said, adding that the legality and ethics of filming are two very distinct questions. Filmmakers must adhere to regional, state, and national laws that are in place, but they also must “selectively choose what kind of risks that may be worth taking or not worth taking.” Decisions are made on a project-by-project basis, and if filmmakers decide to move forward, Teng is doing her best to shepherd them through uncharted territory, including helping them find PPE. “I’m learning now how to support filmmakers in so many other ways,” she said.

Many questions remain, whether you’re in mid-production, rethinking distribution strategies or in basic survival mode. Will filmmakers of color be able to access support they need to weather the storm? Panelists discussed pre-COVID issues that are now magnified: limited funding; the need for ongoing editorial guidance throughout a project’s lifetime, crew safety and mental health support.

It’s a time to reimagine many aspects of the industry, said CAAMFest director Masashi Niwano, who said he’s been inspired by filmmakers creating grassroots online spaces to fund and display their films. While mourning the loss of an in-person festival, he said he was excited by the “new level of engagement and connection to a global audience” a virtual CAAMfest has been able to build. Perhaps this time will help the industry rethink its conventional distribution timeline of theatrical first and online last. “Can that go back and forth in a certain way?” he asked.

On Friday evening, the Summit’s final gathering returned to reflections on our new reality during the time of COVID-19. Leaders in documentary film shared how they’ve been helping filmmakers and contemplated a “reimagining” of the industry’s future. 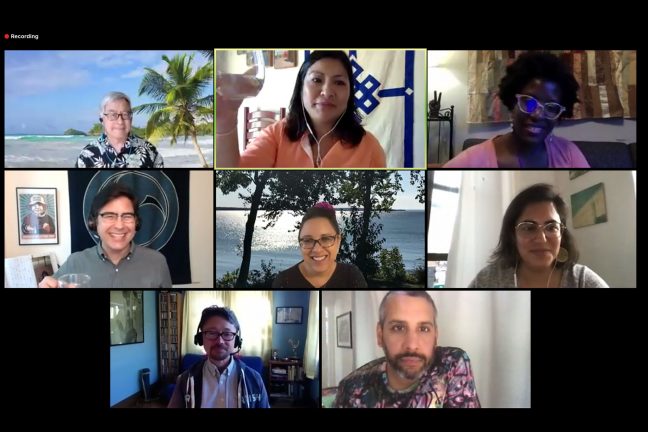 What Documentary Film Organizations Are Saying

International Documentary Association: Carrie Lozano, director of IDA’s Enterprise Documentary Fund, said her team has been having many deep conversations about the impact this pandemic will have on the industry, but is trying to “focus on things that are practical and useful in the moment.” A great example of this was their early collaboration with ITVS and Firelight Media on workshops and resources to assist filmmakers in applying for relief and disaster funding. She noted that every day filmmakers ask IDA for advice on resuming production, but they can’t give definitive counsel. Instead, they’re paying close attention to other ways they can lobby and advocate for freelancers, and identify protections in other spaces that could be emulated in the doc community. They are also working on a virtual format for their bi-annual Getting Real conference which was slated for September. One of the themes of the conference is “Possibility”– resonant in a time when reimagining the field is needed now more than ever.

Sundance Institute: Director of Outreach & Inclusion Karim Ahmad said “there is no model for risk elimination in production right now,” but his team at the Institute recently partnered with Field of Vision and Doc Society to provide some starting guidelines for “Filming in the Time of Corona.” It offers a blueprint and reminder that there needs to be a thorough risk-assessment, especially as some filmmakers are experiencing pressure from financiers to finish their films. Sundance has also focused on a rapid response to support artists. “The majority of the funding out there is project-based and there is little to sustain artists as individuals,” Ahmad said. Sundance established a $1 million emergency response fund, dedicating one-third of the funds to general Artist Relief grants with a low barrier to entry. “We’re recognizing that a lot of small organizations and artist collectives are in danger of not surviving this,” he said.

Firelight Media: Senior Director of Artist Programs Monika Navarro lamented the historical inequities of race and class that have become starker during the pandemic, translating to filmmakers of color as outlined in this recent Indiewire article by Tambay Obenson. With support from the Perspective Fund, Firelight began offering one-on-one consulting and bookkeeping support. Staff have also been surveying and interviewing filmmakers on their current situations and plan to publish a white paper on their findings. This is the precise moment when “the filmmakers can lead and tell us what they need, and hold us [the organizations] all accountable,” Navarro said.

Brown Girls Doc Mafia: Founder Iyabo Boyd spoke to the hardship felt by those who have lost their livelihoods, but noted a silver lining in the vulnerability BGDM members are able to share with each other during ongoing Zoom mental health check-ins. The group strives to uplift the emotional and holistic wellbeing of women and non-binary people of color in documentary film, and Boyd said there is also power in getting off the “hamster wheel” and “centering oneself and being quiet for awhile.” At the same time, members have established peer skill-sharing groups focused on enrichment and learning. More urgent than a return to production, BGDM prioritizes making the career pipeline accessible. Boyd encouraged her peers to “stay vigilant about diversity and allyship when reimagining these spaces,” pointing people to BGDM’s FAQ section on how to be an ally. “We don’t want to lose two whole generations of women and POC filmmakers,” she said.

A-Doc (Asian American Documentary Network): Filmmaker Robert Winn noted that the group’s #Surviving_Covid19 Slack channel became a great resource, allowing members to vent, “process COVID grief and COVID acceptance,” participate in an Ask Me Anything webinar on mental health, and even rethink funds that were set aside to help members get to film festivals. That brainstorm manifested into this ongoing microdoc series supported by CAAM, the Ford Foundation and the MacArthur Foundation. Members submitted story ideas and were then commissioned to create two-minute videos of Asian American stories during the time of COVID-19. Increased collaboration between film collectives like A-Doc and institutions like those present has been a bright spot of the pandemic. “As individuals and as a group, we need to flex our muscle,” he said. “Continuing this sort of organizing is so, so crucial.”  And for some levity, he encouraged others to try this “freaking delicious” matcha mochi  cake recipe! (Shout out to CAAM’s Sapana Sakya for circulating!)

ITVS: In addition to partnering with groups like IDA and Firelight on industry response, Supervising Producer Michael Kinomoto said they are busy managing their co-productions and helping filmmaking teams figure out new digital distribution strategies. ITVS is also working on transitioning future events, like their Independents Summit, to an online format. Kinomoto echoed the sentiment of recognizing power in numbers. “What’s so valuable right now is that we can all be in dialogue,” he said. “It’s hard to imagine a utopian movement in all the mess that’s happening, but that’s exactly when we can’t give up. Keep the questions coming.”

Amid the many hurdles and transitions individual filmmakers have made to keep projects, festivals and distribution in motion—and just survive as human beings—events like these keep our community tethered and engaged.

The CAAMFest Filmmaker Summit: Work From Home Edition was a call to action for filmmakers to keep reflecting on what we need during the COVID-19 pandemic, and will need, moving forward—and communicate that to the organizations that represent us. Luckily, they’re listening, too.

Though handshakes and hugs were replaced by emoji applause in Zoom chats, I feel grateful for the sense of solidarity the CAAMFest Filmmaker Summit fostered over these two days, even if in a virtual format. CAAMFest Masashi Niwano summed it up perfectly: “I’m just happy we’re here.”

Lauren Kawana is an independent documentary filmmaker based in Oakland, CA. She is a member of A-Doc, BGDM, and serves as the President of the Asian American Journalists Association, SF Bay Area Chapter.