"I was thinking, it would have been nice, for twelve-year-old me, to have stumbled on this PBS Korean War documentary and hear a Korean American. That was something I would have loved." - John Cho

UPDATE: Korea: The Never-Ending War is now streaming on PBS until May 28, 2019

Providing much-needed historical context for the current political tensions between the U.S. and North Korea, Korea: The Never-Ending War uses archival footage, commentary by military experts, historical photographs, and survivor interviews to craft a compelling overview of the missteps, maneuvering, and hubris that ultimately led to the “Forgotten War.” An unbearably violent conflict, the Korean War left most of the peninsula bombed to rubble, with the U.S. military dropping more ordinance on the tiny divided country than all of Europe during the Second World War. Millions died. Many of those who survived the war’s strangely absurdist yet deadly assaults, U.S. military veterans included, were struck mute by trauma.

The narrator of this quietly devastating documentary is actor John Cho. Already a household name for his portrayals of Mr. Sulu (Star Trek) and Harold Kim (Harold and Kumar), Cho starred in Searching (2018), the first mainstream Hollywood film to headline a Korean American actor. It was recently announced that he will be incarnating space rogue Spike Spiegel in the live-action, big-budget adaptation of Cowboy Bebop for Netflix. His career seems poised for global superstardom. And yet, despite the demands on his attention—he was trending on Twitter as we chatted—he spoke carefully and thoughtfully about the very personal subject of this film, explaining why he wanted to give voice to these collective historical memories.

Partly funded by the Center for Asian American Media (CAAM) and directed by John Maggio, Korea: The Never-Ending War will be premiering on PBS on April 29, 2019.

Given your busy schedule, what motivated you to take on this project?
As I recall, it came to me through traditional means through my agent, and I wanted to get a Korean American voice in there. I was so gratified to be asked. My response was: If you want me, yes, yes, yes! For a lot of reasons, I was thinking about all the documentaries I’ve seen over the years about the Vietnam War; sometimes they included an Asian perspective but usually they lacked voices. Simple things like bad pronunciation used to really bother me. My father used to say things like, “In America, you say ‘small town,’ but if it’s not in America, you say ‘small village.’ Why it is a ‘village’ there, but a ‘town’ here?” It’s that kind of perspective that made me want to participate.

Did your father say anything when you told him you were narrating this project? I ask because for years, my relatives would say nothing about the war. As they get older, however, they seem to finally be willing to talk. It’s not unlike what’s happening with the last survivors of WWII. They’re worried that the history will die along with them. Have you experienced this with your own family members?
My father told me some stuff early on. It’s funny—now, that he’s more willing to talk, his memory is not what it used to be. But for years, I’ve wanted to set up some kind of story database, like what the Shoah Foundation does, where the children, grandchildren, survivors could upload recordings to a site that would make accounts accessible to the public. [Interviewer’s note: this work has been started by the Legacy Project of Korean American Story]. There are so many Koreans who went through this trauma and then found themselves in post-war Korea. It wasn’t easy, especially if you weren’t well off to begin with. A lot of people left. I guess something about the diaspora makes me worry that these stories are so much more fragile, more easily forgotten if you’re, say, living in Sydney and don’t have your grandparents around. 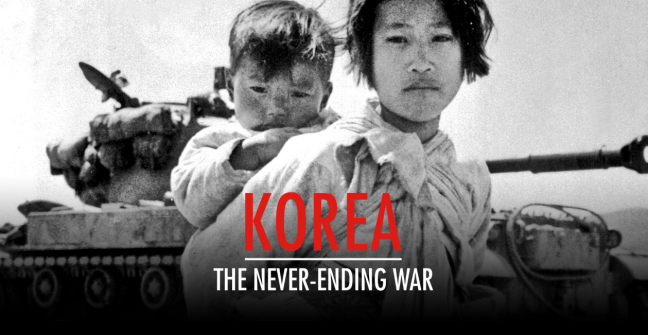 In the film, the testimonies of survivors were gut-wrenching. And startling. Today, the K-Pop shimmer around all things Korean tends to obscure this tragic history. I knew about the bombing of Korea from reading books on the subject, but it’s different seeing footage and hearing testimony about it. It was a visceral shock. Your narration was very moving. There was so much emotion in your voice.
It was all fresh for me. I’d just gotten back from Korea. I hadn’t been in many years. I’d been thinking about my life, and my parents’ life, as you do when you go to your home country. I went to see my grandmother’s grave—she’s buried very closed to the border there—it was in the same town, coincidentally, where they shot Burning (2018). Have you seen it?

Yes! Korean films are extraordinary, aren’t they? And Steven Yeun is in it! Just out of curiosity, are you popular in Korea?
Uh…I don’t know! They’re aware of me? Prior to Searching, many of my films have not done well in Korea. Searching was the first one of my films that was a hit in Korea. The work that people tend to know me for here, like Harold and Kumar, there are censorship issues in Korea. And Star Trek has never been particularly popular in Korea. I think it’s popular in places like Germany, Japan, Australia…but it’s mostly a U.S. phenomenon. Koreans knew I was an actor working in the states, which contributed to the goodwill behind Searching, but it was my first big hit there.

It’s an extraordinary film, in no small part because your performance in it was outstanding. Lately, there’s been a lot of talk about the lack of good roles for Asian actors in general. Do you think you’re maturing as an actor, or are you better because there are better roles for Asian actors now?
I don’t know. A combination? I think…hmmm. I think I’m finally learning how to act. I don’t say that with a sense of false modesty. The biggest problem facing Asian actors, at best, is the lack of opportunities. It’s really hard to mimic circumstances of being on a set. You just have to work a certain amount in order to get better. To relax and be able to take in the circumstances and make the right decisions on a moment-to-moment basis. At the beginning of my career—and I will say that the “beginning” lasted a very long time—all I was trying to do was to say my one line, please the director, get out, and get paid. I didn’t have much of a sense of ownership over my performance or the film. It was a job. It took a long, long time for me to prioritize my happiness with the role, the scene, the film. To say, I have an opinion. It should be done this way. This way is more authentic. This is the character I’m building. It took a long, long time for me to be assertive with that. Until I did that, I didn’t think I was acting. I was getting in and out of jobs.

I think you’re being kind of hard on yourself.
Maybe! It’s not so much that I’m doing exceptional work now. Acting just feels like a different activity for me, than what it used to be.

Because the roles are different, or because your head is in a different place? For example, Searching featured you in a complex role with a well-positioned Korean character. How much of what you feel about your work has to do with the fact that there are increasingly better roles for Asian actors?
That’s some part of it concerning where I am in my career, whatever that means. Mostly it’s my headspace. My approach.

Could you envision, for example, a new version of M*A*S*H where you got to see the Korean perspective on the war?
M*A*S*H is such a…hmmm. It wasn’t just about the Korean War but about coming to terms with the Vietnam War, so I almost wouldn’t want to see a new version again, even one that was more accurate. It would have to be a different idea altogether.

It’s not about a remake per se but shifting narrative perspectives. You’ve just said that your films get very different receptions in Korea compared to America. On social media, there is a lot of discussion about the political position of Asian America in relationship to Asian countries. In cases of war and conflict, the stakes are very high. It matters who is doing the storytelling, and how that story is being told. I imagine that you, as an actor, ponder how to bring forward the emotional dynamics of history and power embodied through the internal struggles of your characters. Does this have bearing on what you were saying about coming into your own as an actor, not just as craft but of positioning and purpose?
I think, in a ham-fisted way, I’ve been struggling—ever since I’ve become an actor—to come to terms with how to represent Koreans. It’s a very complicated mission for me. It starts with the very premise itself. Should I? Am I required to? Some of it is avoidable. Some of it is not. For the first half of my career, I was just playing guys who were written white. In some ways, that avoids a lot of stereotypes. And then, you come into a situation where you ask yourself: Well, if I were to maybe pitch a project about Korean Americans, what would that look like to Koreans? Who would I have to work with? Does the director have to be Korean? Who am I selling this to? Who would the audience be? What would they expect? And so on. It becomes tricky. I haven’t solved this question for myself. I don’t know if there is an ideal situation. In the middle of this, this documentary project came along and it was something that I wanted to see, that I wanted to participate in. I thought I had the requisite skill set—the knowledge, the emotional connection, the ability to read the English—and, hopefully, the Korean well enough. I did think it was important to ask myself, would twelve-year-old me appreciate me doing this role? And I was thinking, it would have been nice, for twelve-year-old me, to have stumbled on this PBS Korean War documentary and hear a Korean American. That was something I would have loved.

Do you have children? Is “twelve-years-old” significant somehow?
During my middle school years, my family moved around the country a great deal. So it represents a time of great chaos for me. The second migration in my life. I do have a ten-year-old and a six-year-old, and I think about how they see the world. Part of the process of having children is a reexamination of your own childhood, your own parents, and the way you were brought up. You start unpacking things you take for granted.

I was surprised that I cried. It’s not my usual response to films, even ones designed to be tearjerkers. It made me think that a lot of families in this country would benefit from seeing this documentary.
A lot of this stuff really feels like a light touch on a wound. You’re surprised at how much it hurts. You’re surprised because that wound may be fresher than you thought. There’s something that made me tender, just knowing that PBS was making the documentary and that people would see it. It touched so many nerves for me. This last year, people were watching Crazy Rich Asians and as the credits were rolling, people started crying. There’s some….some lack there that needs to be addressed. The fact of simply being acknowledged was part of the emotion.

Paula Lee’s memoir, Deer Hunting in Paris, was named Best Travel Book of 2014 by the Society of American Travel Writers. She is hoping to soon complete a novel, entitled WASPs, about the long and tangled legacy of the Korean War in the U.S.