In 2016, Awkwafina and Margaret Cho dropped the anthemic, tongue-in-cheek “Green Tea”, urging us all to “flip a stereotype.” Asian American comedians responded, and the past year and a half has seen an influx in television, new media and live performances that cut to the heart of the conversation around whitewashing and cultural appropriation. Asian American women in particular are driving this cultural moment, turning instances of exclusion into opportunities and creating stories that are fresh, topical and often disarming.

This panel builds off CAAM and NBCU’s 2016 panel, “Expanding the Conversation”, with a nod to the women working in front of and behind the camera, in the writers room and on the stage to shift the culture of representation. Join us as we speak with some of the industry’s top voices about how they use laughter to tackle difficult and timely issues.

Traci G. Lee (Moderator) is the Digital Editorial Manager for NBC Asian America, where she oversees the country’s first national news source dedicated to producing content about, for, and by Asian Americans and Pacific Islanders. Under her direction, NBC Asian America has grown into an award-winning multimedia platform that includes “NBC Asian America Presents…,” a digital video channel that has produced viral mini-series and two feature-length documentaries. @traciglee

Colleen McGuinness (Writer and Producer) has written for numerous television series, including NBC’s Emmy-winning 30 Rock. She shared in the show’s 2013 Emmy nomination, as well as its 2013 and 2014 WGA nominations and 2014 PGA nomination. She has developed pilots with Tina Fey, Matt Damon, F/X, and HBO. She was most recently a co-executive producer on Netflix’s comedy series Friends From College and is currently writing for an untitled comedy starring Maya Rudolph and Fred Armisen for Amazon. She graduated from Harvard University and was raised on Long Island, New York

Geeta V. Patel (Writer and Director) is known for her emotional, form-pushing, and nontraditional style in both comedy and drama. Geeta is writer/director of the upcoming martial art/political thriller entitled Mouse, and has directed episodes of The Mindy Project, Superstore, Fresh Off The Boat, and Speechless. She previously directed second-unit on Sense 8. Geeta and her brother, Ravi, are writer/directors of the upcoming Fox Searchlight feature film Untitled Patel Project, adapted from their award-winning documentary film, Meet the Patels (ITVS/Tribeca). @geetavpatel 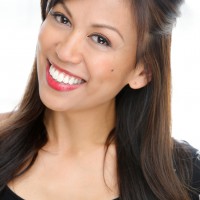 Tess Paras is currently filming a series regular role on an Amazon show and is also developing a show with Discount Sushi Productions. Tess recurs as “Jayma Chan” on the CW’s Crazy-Ex Girlfriend, “Miranda” on Take My Wife (Seeso/NBC Universal), and she is most recognized for her role as “Dana Tomas” on NBC’s hit drama, Grimm. Tess has created digital comedy content for Fusion, including the viral sketch “Trumping Makeup Tutorial” with over 6 million views. She was a cast member and writer for the 2014 CBS Diversity Sketch Comedy Showcase and performs monthly at The Upright Citizens Brigade (UCB) Theatre with Quick & Funny Musicals. Tess graduated magna cum laude from NYU and is represented by Gersh and Primary Wave Entertainment. @tessparas