Both Lena Khan’s THE TIGER HUNTER and Ric Burns’ and Li-Shin Yu’s THE CHINESE EXCLUSION ACT revealed the pull of American ideals, drawing immigrants across oceans in hope of a better life.

Immigration bookended CAAMFest35, and was implicit on the screen in every program. Rosie Ming, the Chinese-Persian animated star of Ann Marie Fleming’s WINDOW HORSES, welcomed us in this year’s trailer with “Salaam,” “peace,” and we literally entered the festival through her, making us all immigrants to CAAMFest. I’m a first generation (or 1.5 generation) immigrant myself, coming from India as a baby with my mother. I know little about my grandparents, and almost nothing about the generations before them, leaving a kind of emptiness that craves and embraces all stories. I needed those stories to make sense of myself and the world, much as Cyrus Tabar looked for answers in the silence of his parents and old home movies in his Loni Ding Award-winning IT IS WHAT IT IS. If I took a DNA test at Ancestry, I’m pretty sure my blood would be 100% South Indian, but my soul is an amalgamation of all the world’s tales, immigrants to my shape-shifting continent of identity, catalysts for the transcendence of identity itself. Many of these stories came direct through CAAMFest, the Lady Liberty and Ellis Island of my Asian American, and human, journey.

Both Lena Khan’s THE TIGER HUNTER and Ric Burns’ and Li-Shin Yu’s THE CHINESE EXCLUSION ACT revealed the pull of American ideals, drawing immigrants across oceans in hope of a better life. Our founding fathers created a nation built on those ideals, but fell short of them from day one. THE CHINESE EXCLUSION ACT is a profound document of how Chinese immigrants pressed for freedom and inclusion under dire circumstances, including lynchings, massacres, racism, and political opportunism that found common victims in Blacks in the South and Chinese in the West. These early Chinese believed in America, but discovered that America is a creative act.

We are still creating, sometimes against a cataclysm of opposing forces and attitudes. Supervisor Jane Kim courageously called out President Donald Trump last night as an “enemy of the state, media and the arts.” His supporters would say his exclusionary acts are only to protect the safety of the state, and that the media and arts only support the liberal elites (specious, bombastic, cynical and misleading arguments at best, in my view). I have no idea how they would defend cutting Meals on Wheels, diplomacy, or Medicaid. Their stridently parroted talking points make little sense to me. Letters and editorials written by those early Chinese in America parallel our current situation: vulnerable populations aghast at politicians abusing their power, using the only power at their disposal, their voices and a call to ideals and understanding. Unfortunately, the Chinese Exclusion Act wasn’t abolished until World War II, which made the Chinese our allies and highlighted the need for our ideals to stand in contrast to Nazism. Yet simultaneously, ideals were shattered as Japanese Americans were placed in concentration camps. As one scholar put it in Burns’ and Yu’s documentary, the government’s actions can be legal, but also immoral and wrong. 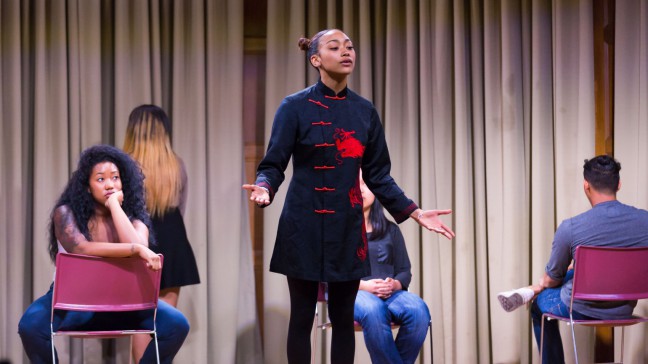 For me, the pursuit of happiness is a pursuit of our greatest human potential. The arc of history is long, and rife with many grim setbacks, but bends towards justice, the expansion of rights to all, and inclusion in common humanity.

As an only child and immigrant, I’ve had to deal a lot with loneliness and feelings of exclusion, as nearly everyone does in some way. As a psychiatrist, I think a lot about the many variations of relationship. Does relationship exist as a spectrum, running from ostracism, exclusion, scapegoating and loneliness at one end to the peace of belonging at the other? That is one way to think of our plight. But the “peace of belonging” seems such a fleeting, fragile state. My peak of belonging was probably at the Oakland Museum of California last Friday, as I communed with CAAMFest friends, downed delicious Jamaican food, and experienced BLASIAN NARRATIVES with a sold-out CAAMFest audience. But I know that peaks alternate with valleys, just as our national peaks of inclusion alternate (or even coexist) with valleys of exclusion and discrimination.

I think it’s best to see and experience the “spectrum” as wholly contained in the circle of belonging. Every family, every relationship, has notes from the spectrum, but together they play the music of belonging. We must strive to feel and express our belonging even in exclusion and discrimination, even in loneliness. Belonging is our truest, deepest state, sometimes clouded by our own ignorance or the ignorance of others. If we carry that knowledge within us, then no one can deny belonging to us. If imprisoned Tibetan monks can feel compassion for their Chinese captors, if Mandela could treat his jailers as the human beings they were, then our human potential knows no limit.

Inclusion is not simply an external phenomenon, or a provision from benevolent others. It is a creative enactment of our human truth.

Our hearts and minds have no borders. Each time we meet, each time we dream, we immigrate into each other’s souls. Remembering this, we can only say salaam, aloha, ni hao, namaste, welcome.

It’s good to see you.