The project began as a collaboration between Morehouse and Spelman College students documenting and exploring the identity formations of individuals with mixed Afro-Asian heritage, colloquially known as “Blasians.”

Join CAAM at the Oakland Museum of California (OMCA) for Blasian Narratives, directed by Jivan Atman. Blasian Narratives is a multi-media “Docu-Theatre” project that intimately explores the intersection and identities of mixed race Black and Asian individuals through live performances and film. The grassroots project aims to bring historically polarized communities together by illustrating the complexities and unity of identity awareness–how you see yourself vs how you are seen–in hopes of building solidarity along the way. The cast and crew now includes students and graduates from Stanford, NYU, and more.

Enjoy live spoken word performances and a conversation hosted by 106 KMEL’s Lady Ray, along with other special guests to be announced. Q&A will include Director Jivan Atman and subject Marlon Booker. The program is preceded by CAAMFest at OMCA as part of Friday Nights @OMCA. Seating for the film is limited. Tickets are required for Blasian Narratives.

Tickets to the film screening: $14 General, $12 OMCA and CAAM Members

Past CAAMFest screenings at OMCA have included When the Bough Breaks (2013), Awesome Asian Bad Guys (2014), Changing Season: On the Masumoto Family Farm and Mele Murals (2016).

How does one navigate being Black and Asian in the U.S.? How do the repeated experiences of being read as predominately as Black or predominately as Asian impact one’s prospect for intimate belonging or even political organizing with the other group? In what ways can Blasians speak to Black and Asian American issues using their lived experiences as a starting point? Blasian Narratives is a bricolage of thematically divided vignettes based on the cast members’ real life experiences. I interviewed Blasian Narratives Director Jivan Atman via phone. 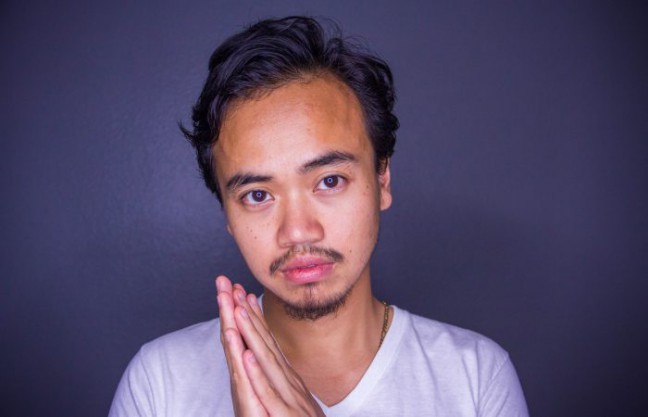 What motivated you, a non-Blasian, Cambodian American, to create a project about Black and Asian stories?

I was born in Cambodia. Often times, later generation Asian immigrants, refugees or asylees, tend to end up in Black or Latino neighborhoods and you often try to identify with those communities or try to figure out your own identity in America within those spaces. So I’ve always been interested in the complicated relationships our Black and Asian communities have had with one another.

I chose to go to Morehouse for college, a historically Black and also men’s college. I wanted to learn more about what brotherhood would mean to me because I didn’t have many male friends and I chose a HBCU [historically black colleges and universities] as one way of learning about that. I thought it would be a really good educational experience for me to learn something that was not Eurocentric. So when I got there, just by standing out, you tend to meet other people who also stand out.

I first met the twins, two of the original Blasian Narratives cast members. I first thought they were Filipino. In certain spaces you long for belonging or familiarity and we were in a sense outsiders in this community and I think we found commonality or this sense of familiarity in each other. We were trying to figure out more about “the black experience” and I was really happy to meet them where they were in their life. They had done a lot of soul searching on what it meant to be both Black and Asian. I learned a lot from the stories they shared and thought they were something society at large could benefit from — that way of looking at the middle ground in way that really empowers not just yourself but the people who also share your identity. I would later end up meeting the eventual female cast members at Spelman College, an HBCU and women’s college, when I was taking my major theatre classes there. Then while at Stanford, I met other cast members.

The Black/Asian story sounds so specific but is also very universal too. At the end of the day it’s about identity and how you see yourself versus how others see you.

Is the reception of your play different at HBCUs than at places like Stanford? What’s the feedback from your audiences been like?

We’ve had the honor and privilege to perform at so many diverse venues. When we perform at Morehouse and Spelman, the audience is mostly Black. Some of the friends of the cast members will approach them afterwards and say, “Wow, I just thought all this time you were Asian.” When we go to Stanford, the audience is much more mixed race. At Pomona, there is a more Asian audience. In the theater performance, we are able to get more instant feedback.

I think our goal is to affirm Blasian identities but another of our other missions is to bring Black and Asian communities together. At our last performance in Pomona, we were told that was the first time there were so many Black and Asian folks together in same space. For us, at the very least, in our predominately Black audiences, we want to help shine light on Asian American issues and in Asian American spaces we’d like to do the same with Black American issues. I think our job is to bring another perspective that hasn’t even been considered before.

How do you envision the term Blasian in its current usage? What about in juxtaposition to other hyphenated/hybrid terms like Black Asian or Hapa?

I think that’s a great point to address. Even among our cast members it’s not a term that just rolls off the tongue. What I sometimes see on social media is that Blasian is a term that tends to be is fetishizing. We want to think about how we can reuse it or repurpose it. How can it be a term that’s endearing but also empowering and inspiring? It is definitely not a one size fits all term. We definitely have ongoing conversations about this too.

In several the of the narratives there is an attentiveness to anti-blackness. I sense that many of the cast members are thinking of being Blasian as more than a hybrid racial construct but as a political one as well. How are they using their stories to talk about justice?

We see Blasian Narratives as an opening conversation to discuss the oftentimes polarizing and antagonizing issues around race. While we tackle anti-Blackness, we also need to tackle anti-Asianness. As our project grows, we’d like to address more issues around restorative justice and so we want to eventually use our platform as a way to bring two traumatized communities together and help them see we are not the enemy towards each other as we sometimes think we are. How can we see each on more common ground, along with other people of color like Latinos and indigenous communities too. I think that a big part of why Asian Americans are read badly by other people of color is because of our proximity to whiteness. It’ll be interesting when a lot of Asians reject that on larger scale especially with current administration. We’ve had a cultural amnesia in regards to what happened in the 60’s and now it seems to be revisited again. We’re living in pivotal moment in time and if people want to be a part of a historic period, this is the time.

Mitzi Uehara Carter is a professor of Anthropology and East Asian Studies at Florida International University. Her research focuses on race in transnational militarized spaces. She is currently working on her book about her mother and militarization in Okinawa.