Sami takes the physical journey from India to America; he sets off on a hunting expedition in the form of killing it at work; and then embarks on a spiritual journey beyond America towards some higher state.

Donald Trump went too far from the very beginning. Even Hillary Clinton got it wrong. If campaign slogans supply a candidate’s lift and appeal, both fell flat. “Make America Great Again” and “Stronger Together” were both forms of cognitive closure, or trying to screw down what should be inscrutable. They insist that there is some state of totality and completion in the great past or present. Compare “Hope,” “Yes We Can” and “Change We Can Believe In.” Campaign slogans should be cognitive openings, not closings. Cognitive closings presage border closings, and other contractions of the mind and heart. Lena Khan’s delightful, timely comic odyssey THE TIGER HUNTER, were it a candidate, would get its campaign slogan right. It’s not “Make America Great Again.” It’s simply, and profoundly, “Make America.”

Make America. Make Yourself, but more importantly, Make America. THE TIGER HUNTER blends an epic hero narrative, complete with faint echoes of Homer’s original Odyssey, with an ensemble cast that embodies and enacts the immigrant ethos of collaboration and mutual aid, and the humor of personalities and cultural mixups and mashups, to reveal elemental and important truths in this era of travel bans and deportations of undocumented parents before the eyes of their young children. (1) Immigrants, we get the job done; and (2) perhaps we are all immigrants on a lifelong night sea journey, on which, as Goethe wrote, “the eternal feminine draws us upward.” Sami Malik, our Indian Odysseus, makes many journeys. There to here. Outsider to (relative) insider. Down to up. And most importantly, outer to inner. He encounters gatekeepers, antagonists, and external and internal opponents, as he traverses the ocean of his aspirations towards his Penelope. He jumps into the mouth of the dragon of corporate America, but deep in the belly, and even after he gets to the dragon’s head, he discovers there’s something more.

Sami takes the physical journey from India to America; he sets off on a hunting expedition in the form of killing it at work; and then embarks on a spiritual journey beyond America towards some higher state (California, of course), with the promise of love and redemption, in itself not a form of completion, but rather the beginning of a new adventure. The ending is less a cliffhanger than a bridge-builder, I’d say. It leaves us all wanting to set our sights on Aquarius, as do the hero and heroine in their final scenes, symbolizing social consciousness, humanitarianism, and spiritual uplift. Love in all its forms. I think we’re all ready to see that sign of the times. But really, we have to Make It after all.

Lena Khan was on hand with many members of cast and crew, from stars Danny Pudi (of NBC’s Community fame), Rizwan Manji (NBC’s Outsourced), Jon Heder (Napoleon Dynamite), and Sam Page (Mad Men); producers Megha Kadakia, Nazia Khan and Alan Pao; and production designer Michael Fitzgerald. Khan reported that the script grew out of stories her immigrant father and others told her about their own sometimes madcap adventures, and the real stories of our own “hidden figures” in microwave oven development (and many other fields, of course). One story that didn’t make the cut was that a certain immigrant who shall be unnamed had to break the toilet of non-amebiasis infected White people in order to get a stool sample to pass the medical requirements for his visa. I guess we Asian Americans have paper sons… and toilet paper sons! Whatever it takes, man. He was not going to throw away his sh-t, er, shot. Manji spoke of how the meaning of the film changed since filming in 2014 – immigration has now become an especially loaded topic. All the cast and crew spoke of how important and relevant the film has been for them. Pudi hit the nail on the head when asked about the meaning of the film (I paraphrase). “We all have to create our own definition of success. Greatness is not material, it’s in connecting.” 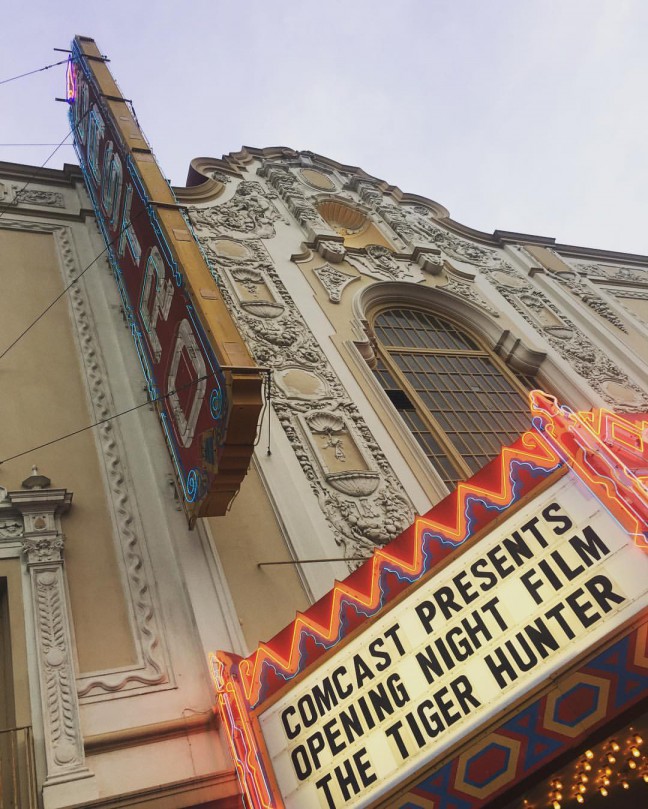 You’re in my head, Danny, you’re in my head. Connecting is my wheelhouse as a psychiatrist, but it’s also our most important collective wheelhouse. At this historical moment when “Great” as in MAGA hides the overt oozing spread of disconnection and even virulent antagonism, and we all imbibe the more subtle disconnections of screens-we-make-far-too-great-in-our-lives, I think we are all finding that we have to tend to connection more actively. As Keats wrote in The Circus Animals’ Desertion (perhaps ironically, given the Tiger of our Opening Night film’s title):

Now that my ladder’s gone

I must lie down where all the ladders start

In the foul rag and bone shop of the heart.

Let’s lean our ladders on the right wall.

And be sure to follow THE TIGER HUNTER on Twitter and Facebook! Lena Khan announced last night that her film will have a national release this fall! The only way to fight whitewashing and Hollywood’s assumption that Asians can’t bring box office is to show up at the Cineplex. Let’s Make America!

Ravi Chandra, M.D. is a psychiatrist and writer in San Francisco. He writes The Pacific Heart blog for Psychology Today. You can find him on Facebook, Twitter, or best of all, sign up for an occasional newsletter at www.RaviChandraMD.com. When you sign up, you can get his free e-book on Asian American Anger. More CAAMFest MOSF blog posts can be found here and here. This blog post represents the opinion of the writer, and not the views of the Center for Asian American Media.