The story of Tashi, who wants to bring electricity to a remote village in Nepal near the border of Tibet, is highlighted in this documentary, which airs on World Channel on Sunday, November 13.

Tashi’s Turbine is now streaming until December 12, 2016 on PBS and World Channel.

CAAM is proud to co-present Tashi’s Turbine, a CAAM-funded film, on World Channel‘s Doc World program this Sunday, November 13 (check local listings). The film, which world premiered at CAAMFest 2015, is set in a remote village in Nepal. The film focuses on Tashi, who aims to bring electricity to Namdok with the power of a wind turbine.

Filmmaker Amitabh Joshi shares some insights about filmmaking, and why he wanted to make a film about Tashi and Namdok, which is near the border of Nepal and Tibet. The uplifting story of Nepal, made by a Nepali American, is a rare gem. Joshi is the director and cinematographer of Tashi’s Turbine. World Channel, with CAAM, will also live stream the premiere of the CAAM-funded documentary on Facebook this Sunday at 10p ET/1p PT on World Channel’s page.

Can you introduce yourself—where you’re based and what you do?
I’m a Nepali American filmmaker based in New York City. I work primarily as a cinematographer and director. I have a production company with my producing partner (Erik Spink) called Vacant Light. Erik is also the co-producer of Tashi’s Turbine. Our primary focus is non-fiction and documentary. I’m interested in telling stories about individuals who want to bring positive change.

Can you talk about how you became a filmmaker?
I’ve always been interested in photography and animation. In high school, my dream was to work for Pixar and to become an animator. However, in college I decided to study and focus on International Studies. Once I graduated, I went to the MFA Social Documentary program at the School of Visuals and really developed my skills as a filmmaker. My family had a Sony Hi8 camera when I was seven or eight years old. We lived in many different countries. While we lived in Yemen, I would go around filming everything. I would like to think I’ve been a filmmaker since that time.

How did you learn about the village that is the focus of Tashi’s Turbine, and why did you decide to make a film about it?
I was looking for stories in the Upper Mustang region in Nepal. Until recently Upper Mustang has been a fairly remote area. Road access is difficult and it’s right on the border with Tibet. I started communicating with people in that region and Tashi’s name kept coming up. I finally reached out to him in spring 2012 learned he was developing this turbine project. Tashi wanted to install a test turbine in Namdok, which is the last village in Nepal before reaching the border with Tibet. The village has never received electrical power through the national grid and they have lived for centuries using just candlelight. It’s only been in the last decade residents of the village and region has received solar power and energy through hydroelectric systems.

This was an important story to tell because of Tashi’s ambition to bring change to the region. I think Tashi is unique in that he took the matter in to his own hands and attempts to develop a project that would benefit his community. This type of story is not usually highlighted when it comes to stories about Nepal. I think it’s important to give people who are doing important work a platform. 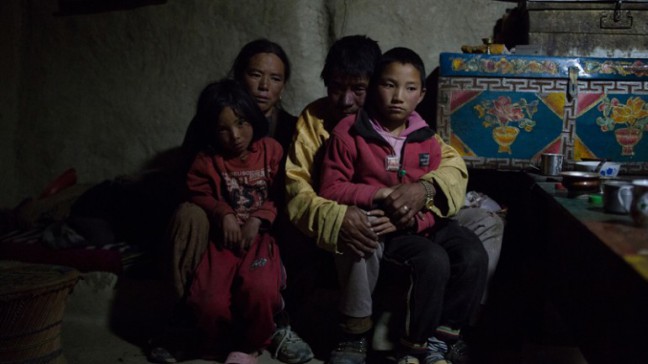 Have you gone back to visit the village, or learned about how electricity has impacted the way of life there?
The last time I was in Namdok was in fall of 2014. The initial trial run and distribution proved to be successful. The turbine was able to withstand two years before breaking down. Since then, Tashi has been organizing new initiatives to build more Turbines and educate the community so that they can maintain their own sources of renewable energy. But Tashi is eagerly attempting to go back to setup the turbine again. The important thing about the turbine in Namdok is that it proves to show that the region of Mustang is an untapped resource when it comes to wind energy. Nepal has struggled for decades with power cuts because of the increased demand and lack of resources. Nepal is rich in hydroelectric potential and this proves that Mustang is also a viable option. In the late 80s there were attempts at installing turbines, both of which failed and Tashi’s attempt has been the first since the 80s.

How long it take to film and make Tashi’s Turbine?
It took about three years for us to complete production on Tashi’s Turbine. We made four production trips to Namdok from 2012-2014. These trips all coincided with Tashi also being in the region. Tashi split his time between Mustang and the other work he was doing in Kathmandu, and Ladakh in India. We premiered Tashi’s Turbine at CAAMFest 2015.

Were there any unexpected or challenging moments from filming Tashi’s Turbine?
Traveling in Nepal there are so many unexpected situations. I think the most unexpected moment happened really early on in the production. In 2012, we had just arrived in Jomsom by plane and were waiting for Tashi to arrive the next day. Jomsom is a fairly remote region surrounded by mountains all around and a pretty difficult airport for pilots. Weather situations change quickly and there is a very small window of time when planes can actually land due to the wind. We had just spoken to Tashi and he had told us that he would be arriving on the last flight. It’s a short flight from Pokhara, which is the second largest city in Nepal, about 20 minutes. Next thing we heard was a loud explosion and dust rising from a side of a cliff next to the airport. The plane had crashed, and only a few people survived. We were horrified by the whole situation and the possibility that Tashi might have been on the flight. Thankfully he missed that flight and he eventually made it up to Jomsom the next day. I quickly learned how remote and challenging it would be to work in this region. There are no major hospitals in the region so those that were injured had to be airlifted via helicopter to Pokhara.

What kinds of documentary subjects interest you, and why?
I’m interested in telling less known stories. I like to focus on stories that inspire change.

Are there any current projects you’re working on that you can talk about?
We are currently working on a film that is a bit more local to the United States. The film is about Hart Island, the city cemetery for New York City. Erik Spink, my producing partner is the director of the film and I’m the cinematographer and co-producer. We have been working on this film for the past five years. It brings to light issues relating to death and dying in a large city like New York. We are pitching the film at the annual Paley Center for Media Doc Pitch event on November 9th. I’m also working on a documentary titled A Little Wisdom directed by Yuqi Kang, and I’m one of the cinematographers and co-producers. The film looks at the life of young monks in a monastery in Lumbni, Nepal.