Wong’s story and ongoing legacy has impacted people all over the world, including CAAM Board Member David Lei, who rediscovered Wong’s piece after first seeing it as a child.

Were it not for some everyday sleuthing and a bit of serendipity, a long-lost painting from 105-year-old pioneering artist Tyrus Wong would be forgotten in a closet of a San Francisco Chinatown church.

Wong, the visionary behind the iconic look of Disney’s Bambi, has a robust and diverse portfolio ranging from Hollywood films like Rebel Without a Cause and Chinese brush painting on ceramics to Hallmark holiday cards and stunning kites. His story has been beautifully captured in TYRUS, a new documentary by Pamela Tom, which premieres in the Bay Area on Thursday, March 10 at CAAMFest 2016.

Wong’s story and ongoing legacy has impacted people all over the world, including CAAM Board Member David Lei, who rediscovered Wong’s piece after first seeing it as a child.

Lei was just about 8 years-old when he first saw a life size painting of Jesus at the Chinese United Methodist Church in San Francisco’s Chinatown. “It was quite Western, colorful, and it was huge, life size or bigger than life size,” Lei recalls of the nearly 80-inch-tall watercolor painting that integrates Western and Eastern styles. What made it most intriguing and memorable was that it was a Chinese Jesus, Lei said.

As Lei grew up, he heard that the painting had been discarded or lost. He struggled to figure out who painted the piece, believing that it could have been made by a Chinese immigrant who painted the backdrop at the Great Star Theater because of its massive canvas. He had seen the original backdrop of the Great Star, signed by an artist named Xu Feng Bo. In his research, it was noted that Xu donated a painting to a Chinatown church, triggering his memory of the large Jesus painting he’d seen as a child. When he asked around, one of the church members said that they threw the large painting away during a remodel.

During a talk at the Berkeley Chinese Community Church, Lei mentioned the painting to illustrate how people throw away things from the past that represent a part of our heritage. An attendee, Lisa Lau, revealed a clue that would lead Lei to the missing painting. 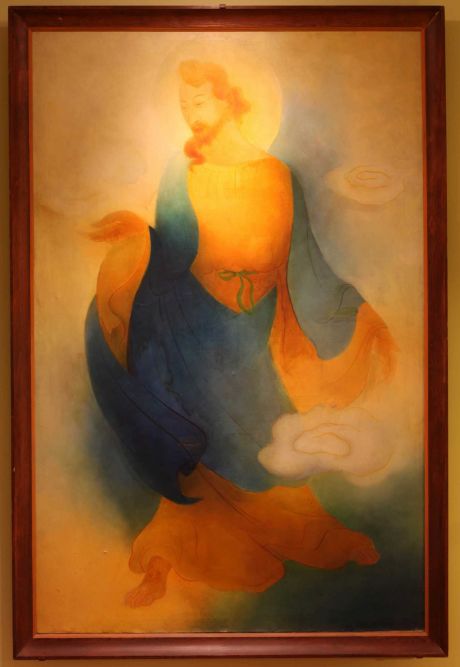 She brought Lei to the church, where they found the painting gathering dust in a little used stairwell.

While it was indeed the painting Lei remembered, it was unsigned. Lei showed a photo of the piece to Mark Johnson, Professor of Art and Gallery Director at San Francisco State University. Johnson saw the photo and suggested they reach out to Tyrus Wong, who was active in an Asian American artists’ association back in the 1930s and 40s, who would likely know the answer.

They reached out to Wong’s daughter, Kim, who remembered that her father had mentioning a painting of his in a San Francisco church, and decided to take a look. “Because we were going up to San Francisco to go to the Walt Disney Family Museum, we thought, why don’t we check it out while we’re out there,” Kim Wong said. The Walt Disney Family Museum held a retrospective exhibit of Tyrus Wong’s artwork in 2013, and the Wong family was in town from Los Angeles for the exhibit. “I didn’t think at that point it was the same painting. What are the chances it being the one that my father painted?”

People who were present recall Wong, who was 103 years-old at the time, hiking up the steep streets of San Francisco Chinatown to the church. When the painting was taken out of storage for Wong to see, he confirmed that the painting was indeed one of his own after peering at the distinct ways the hands were drawn, finally solving the mystery.

The painting, one of Wong’s largest paintings, was originally a gift to the Chinese Congregational Church in Los Angeles. The story goes that the caretaker of the church didn’t like the painting. It’s believed that a minister at the time, Reverend Tso Tim Taam, brought it up to San Francisco when he became a minister in San Francisco.

The Walt Disney Family Museum borrowed it from the church for the Tyrus Wong art exhibit, “Water to Paper, Paint to Sky: The Art of Tyrus Wong,” which had already begun, in 2013, and added it to the exhibit.

After a month and a half at the Disney Family Museum, it went back into storage at the church for the next few years. During those years, Lei also got more involved with the TYRUS documentary and helped fund it. CAAM supported the film with funding from the Corporation for Public Broadcasting.

Two days ago, Tyrus rode in a car up the California freeways and arrived in San Francisco once again.

On Wednesday afternoon, Wong arrived at the Asian Art Museum, his large-scale Jesus painting displayed in a room where San Francisco Supervisor Eric Mar presented him with a proclamation: March 9, 2016 was declared “Tyrus Wong Day” in San Francisco. “[Tyrus Wong’s] gift of creating a feeling and emotion in his art is what captured Walt Disney’s attention, and he unknowingly transformed the look and feel of animation for the film Bambi,” said Michael Labrie, Director of Collections and Exhibitions at the Walt Disney Family Foundation, who spoke at the signing on Wednesday.

The painting itself has personal significance to Wong. His father had taught him calligraphy, which helped develop his style. His father also supported him in his pursuit of art. “The reason I became an artist is because of my father,” Wong told the audience on Wednesday. Wong said his father was discouraged by others in the Chinatown community about his son’s pursuit of art. Wong attended Otis College on a scholarship and worked as a janitor at the school in the evenings, often sleeping there, he said.

Lei believes that Tyrus Wong’s father built the original frame for the canvas. Tyrus Wong was likely only in his early 20s when he painted it, more than 80 years ago.

After that, it’s uncertain what will happen to the painting.

“I believe it belongs in a fine art museum,” Lei said. However, the painting was rejected from a fine art institution because it needs conservation work. The church is willing to donate it to a museum, but there are small tears and the shellac has yellowed over the decades.

Johnson acknowledges the conservation work that is needed on the piece and adds that “Its scale, subject, palette and originality make it a masterpiece of California art in the 1930s….The painting blends some forms from decorative ‘chinoiserie’ (the rounded curls of the hair, fingers and toes) with a figure drawn from Christian iconography to create a uniquely Asian American artistic expression. The work deserves to be in a museum.”