There's a very particular rush to stepping into an auditorium without clue as to the lessons to be learned and what in the world I might be exposed to!

CAAM is excited to announce our first-ever Volunteer Picks at CAAMFest 2016! We greatly value the ongoing support and passion from our hundreds of yearly volunteers. Two lucky volunteers were chosen at random to share their 2016 Festival picks, as well as some information on each of them.

Our next Volunteer Pick comes from Andrew Rogge: 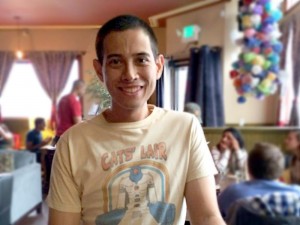 How long have you lived in the Bay Area?

And how long have you volunteered with CAAMFest?

Andrew: About 8 yrs…need to see all the old shirts to remember how many I’ve worn!

What other hobbies do you enjoy?

Andrew: Star Trek, X-Men, translating, volunteering at other film festivals and plays, and helping people with navigation and busses throughout the Bay Area.

Any moments from past CAAMFests that stand out?

A particular moment though was watching an Indonesian movie, hearing tagalog similarities, then turning to a Filipino-looking stranger next to me and sharing the surprise and excitement! A connection to a person I didn’t know and a country I didn’t know; within the same moment. In silence and darkness, but yet with clarity of exchange!

What excites you about CAAMFest 2016?

Andrew: Seeing old friends and making new ones, being a part of the growth and development of the ever-changing festival, and all the exhilarating discussions to come.

There’s a very particular rush to stepping into an auditorium without clue as to the lessons to be learned and what in the world I might be exposed to!

And most importantly, what is your Volunteer Pick for CAAMFest 2016?

Andrew: It was a close call but my favorite is the Shorts Program, THE OUT(ER) LIMITS! Aside from the attraction of a potential classic Sci-fi TV reference, the relatability and just plain old fun of several of the films were very much quite engaging.

Any specific Shorts that stood out the most?

Andrew: For the above reasons and other motivations, the standouts to me were IT RUNS IN THE FAMILY and DO NOT THINK FOR A MOMENT.

IT RUNS IN THE FAMILY drew me in as an individual with similarly multiple gay family members. I’ve been absent from all the moments of revelation of said family members, but the acceptance and support so nonchalant I’ve witnessed constantly, and so were indeed touching in their familiarity.

Additionally the differences in pronoun politics and gender boxes were quite insightful and thought-provoking. It can be so funny and yet emblematic how easily we transpose these labels when switching or mixing language -despite, as stated in the film, how valiantly people elsewhere are fighting for such rights of fluid self-labeling.

DO NOT THINK FOR A MOMENT found me relating in terms of broader Asian stereotypes of stature and youthful features, then pushed my knee-jerk subconscious labeling proclivities with a particular statement regarding the identity of one’s partner vs one’s own identity.

The selection as well of only female subjects also reminded that many cultures and general social contexts still recognize and understand male homosexuality more readily.