We invite you to join us this Asian Pacific American Heritage Month and bring our stories to light.

In honor of May’s Asian Pacific American Heritage Month, the Center for Asian American Media (CAAM) is presenting an exciting slate of films, programs and special events that celebrate the richness and diversity of Asian American experiences. From riveting and timely documentaries, to community and online screenings where we come together to celebrate and talk about our individual and shared histories, to interactive storytelling initiatives where you contribute to the rich mosaic of what it means to be Asian American, we invite you to join us and bring our stories to light.

May 7: Big Taste: Sake & Lucky Chow at the Asian Art Museum
Join CAAM and the Asian Art Museum as we explore the rich intersection of art, culture, food and spirits. To open the night, museum docent Kirsten Shilakes will discuss a flight of three sakes (available for purchase), each of which has been paired with an artwork featured in the exhibition “Seduction: Japan’s Floating World.” The evening continues with an advance screening of Lucky Chow, a new PBS television series produced by the Center for Asian American Media. Museum entry is $5 after 5pm, and the screening is free with museum admission. 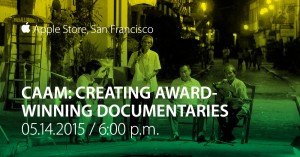 May 14th: CAAM:  Creating Award-Winning Documentaries
Join filmmakers Florante Aguilar and Fides Enriquez, and cinematographer Peggy Peralta as they discuss the process and passion behind Harana. The award-winning documentary tells the story of the last performers of harana—the lost art of serenade in the Philippines. Presented in partnership with the Center for Asian American Media (CAAM), Harana will air on PBS in celebration of May’s Asian American Pacific Islander Heritage Month. Register now to meet the filmmakers and learn about their creative process at the San Francisco Apple Store. 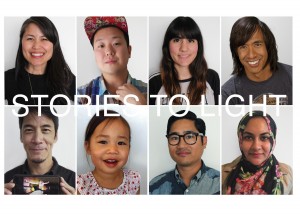 Mid-May: #StoriestoLight Campaign
The Asian American experience is an essential thread in the rich and ever-shifting fabric of American history and culture. We have laid railroad tracks, worked plantation fields, fought for civil rights and engineered technological miracles. Ours is an impossibly varied experience, with nuances born of geographic and temporal difference, neither easily parsed nor ever fully captured.

This Asian Pacific American Heritage Month and beyond, the Center for Asian American Media (CAAM) is proud to present a collective storytelling initiative dedicated to conveying the richness and diversity of your experience. Share your photo and video responses to the bi-monthly prompts on Twitter and Instagram, and we’ll put your dynamic stories in conversation with those of other filmmakers, artists, politicians and more through our web-based mobile app launching in mid-May. Photos and videos shared through #StoriestoLight #Sweeps will be entered for a chance to win the Grand Prize All-Access Pass to CAAMFest San Jose in September, including an opportunity to attend the Opening Night Gala featuring filmmakers and special guests. Join CAAM in partnership with AT&T and together let’s bring your #StoriestoLight. Visit www.caamedia.mobi on your mobile device for Rules & Regulations and text 313131 for more information.

May 16th: Asian Heritage Street Celebration Screenings
CAAM is pleased to present the Cinema Showcase at the Asian Heritage Street Celebration for the fifth year in a row. This free, hour-long program features eight short films and will be held at the Asian Art Museum on Saturday, May 16th at 2:30pm. The films, some of which were recently screened at CAAMFest 2015, cover a wide range of topics, though they all feature heroes who must persist and endure to overcome their circumstances and succeed at their tasks. With a diverse collection of short films at hand, from comedies to dramas, you are guaranteed to be inspired by this year’s short film showcase to strive more for what you hope to accomplishregardless of the size of the task. Learn more on CAAM’s website.

Online and On Television

The Golden Spike on CAAM’s YouTube Channel
This year marks the 150th anniversary of the completion of the western half of the Transcontinental Railroad by Chinese immigrants. The CAAM-produced documentary The Golden Spike presents the story of these 10,000 forgotten workers through photographs, paintings and political cartoons from the period, available free of charge on CAAM’s YouTube Channel.

PBS Broadcasts and Online Screenings – Check PBS.org for your local broadcast station
This May, CAAM honors the stories and contributions of Asian Pacific Americans with a slate of 11 documentaries for public television, including the PBS Broadcast of Filipino American Lives, a 3-part series hosted by Tony-winning actress and singer, Lea Salonga. View the full list of films here.

May 20: OVEE screening and Q&A – Delano Manongs
An online screening with director Marissa Aroy, Johnny Itliong and other special guests to be announced, from 6-7pm [PST].

Films on Xfinity on Demand
CAAM is offering 7 films for Xfinity On Demand subscribers throughout the month of May, including Farah Goes Bang, Jeepney, and Summer Pasture.

Films on AT&T Uverse
U-verse is proud to support May Asian-Pacific American Heritage Month with a special collection of movies dedicated to Asian American film. Titles include classic favorites like Eat Drink Man Woman and The Joy Luck Club to films for the family like Mulan.