"Drawing upon his family’s home movies, Fulbeck has fashioned a unique live performance that promises to be unforgettable."

Since launching Memories to Light: Asian American Home Movies at CAAMFest in 2013, CAAM has presented many live programs and short films using home movies that have been generously contributed to the collection by members of the community. For this year’s CAAMFest presentation, we are excited to premiere Memories to Light: Kip Fulbeck, a live home movie performance by pioneering artist, spoken word performer and filmmaker Kip Fulbeck himself.

“Fulbeck’s work, in films like Banana Split and books like Mixed: Portraits of Multiracial Kids, delves deeply and fearlessly into the implications of mixed-race identity. Drawing upon his family’s home movies, Fulbeck has fashioned a unique live performance that promises to be unforgettable. Selling out two years in a row, this festival favorite is sure to be a hit again this year,” writes CAAM Executive Director Stephen Gong.

The project manager for Memories to Light, CAAM’s Davin Agatep, spoke with Kip about his upcoming CAAMFest presentation. 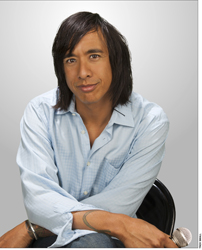 What can we expect from your presentation at CAAMFest?
I don’t want to give away too much, but you can expect a funny, quirky, crazy family. I don’t know, I’m terrible at selling my own shit! A mixture of spoken word performance with clips from past home videos, current home videos.

Great, so you’re using other media besides the home movies we digitized for you as part of the Memories to Light collection?
Oh yeah I’m basically doing a talk about making art, comparing my dad doing it to me doing it, him with his kids to me with my kids, clips with intros and outros with me guiding people.

How will this be similar or different than any of your previous work?
I’ve never done work with my dad’s footage before and I’ve also never shared my own footage of what is now considered art footage, stuff like home films. I’ve got my mom singing racist anti-Japanese songs in Chinese to my kids, crazy shit! It’s really hilarious and I’ve never shared stuff like this before. But I think it’s really universal that everyone’s got crazy families. It’s pretty fun to watch guys in the late 60’s coming from Taiwan and China trying to be American, having American Christmases and watching my kids that are American-born kids, trying to instill some Chinese in them at Christmas.

What was it like going through the home movies that CAAM digitized for you? When was the last time you watched them?
The last time I saw them was when I was a little kid, then seeing the first film I made when I was 13 years old, seeing it digitized even though it pretty beaten up, it’s pretty funny as well. It was crazy. I’m starting to see a lot of parallels to what my dad was doing and what I naturally do with my own kids, which I hadn’t thought of before I saw these.

How has being mixed race changed since the release of your last two books?
(laughs) I don’t know, I mean I would never say or take credit for mixed race changing because of any of my work. I mean I hope that some individuals have found some parallels and some solidarity and some inspiration. People have tried to credit my book with starting something, but no, I’m one of many people that are doing this work. I’m really reticent to sort of take on that moniker. I really don’t know if it’s changed at all.

Do people still stop you to tell you how the book has changed or affected their lives?
Yes hundreds and hundreds of times. At Trader Joe’s a few days ago. A woman was playing with my 1 year-old daughter, she had Chinese eyes and blonde hair… so she left then came back and said, “Are you Kip? I have your book ‘Mixed’ and I’m actually from Hawaii…it was really important to me.” That’s really the most wonderful part of making art. From when I started doing this work when CAAM was NAATA  and no one was really talking about this stuff…we were struggling hard enough to get API identity recognized in the mainstream. [National Asian American Telecommunications Association, now CAAM] and [Visual Communications] and Asian Cinevision were trying to even just get people to understand the difference between Chinese and Chinese American. In some ways no one really talking about the hapa people or mixed people. I remember when that book Moving the Image came out, no one was doing work about being mixed. So I felt like it came to Erika Anderson and myself, Teresa Williams-León and some of the academics like Cindy Nakashima. And then that sort of like helped pave the way for artists like Jeff Chiba Stearns now. That’s what I feel is more important, because maybe we opened doors but these guys are taking it way further than I ever took it.