CAAM is proud to honor the Masumoto family at CAAMFeast and with the feature documentary, "Changing Season: On the Masumoto Family Farm."

CAAMFeast Awards: Stories, Food & You is honoring the Masumoto Family Farm, entrepreneur Danielle Chang and Chef Tim Luym on Saturday, March 7, 2015. The Masumoto family is also the subject of Changing Season: On the Masumoto Family Farm, a documentary directed by Jim Choi and produced produced with the Center for Asian American Media. The film premieres at the Oakland Museum of California on March 20, 2015 7:00 pm.

“Changing Season chronicles a transitional year-in-the-life of famed farmer, slow food advocate, and sansei, David “Mas” Masumoto, and his compelling relationship with daughter Nikiko, who returns to the family farm with the intention of stepping into her father’s work boots. Mas’ hopes and hesitations for the future are shored up with his daughter’s return, as the family must navigate the implications of Mas’ 60th birthday and triple bypass surgery. The film is interspliced with moments of Nikiko’s razor sharp meditations on her family’s internment during WWII and her role as a queer, progressive farmer in the Central Valley. Join CAAM for the World Premier at the Oakland Museum of California, with the Masumotos in conversation.” —Sierra Lee

Below is an essay by Mas Masumoto and a peach galette recipe by Marcy Masumoto:

Have peaches become merely objects of desire, instruments of promotion, shaped by unrealistic expectations gleaned from an artificial creation?…

Through the 1960s and 1970s, consumers were trained to shop with their eyes; suddenly only the visual mattered.…By the 1990s, images began to portray them as lush bodies of gratification, hero shots (the glossy, glamorous photos in food magazines and cookbooks) of an imaginary blemish-free treasure for the taking. Cooking with them produced gorgeous and immaculate dishes, at least in the pictures…. 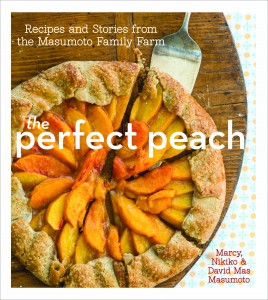 People lusted after this new perfect peach, and all peaches were not equally desirous. Some had the “it” factor and ours didn’t. So we responded on our farm with equal passion. After all, we felt our peaches were authentic and real. We then found homes for them in the organic marketplace and progressive kitchens, joining a new, chic foodie revolution.

Have I become a newly fashioned peach pimp who, along with chefs, use peach desire for profit and power?

Or is this art? Peaches are expressions of my creative soul. If so, then I insist farmers be included in photo layouts. Our dirty stories of farming can also be sexy.

I lick my lips often during harvest, wanting to remind people that if they don’t know real taste, how do they know what they’re missing? Eating peaches should be a sensual experience, not a vicarious one: part of something real—so real that you can touch it and taste it with your mouth and tongue….

On our farm, we lament when small, perky, cute peaches are left unharvested because there is no market for them. Today, the marketplace wants both glowing color and size in its insatiable hunger for perfection. We have created an unreal world of food. But to a public far removed from rural life, farming itself has become unreal.

As a farmer, I feel responsible for what people put into their bodies. As a writer, I hope to share authentic farm stories.

PEACH GALETTE
makes one 8 to 9-inch galette; serves 6 to 8

If I were making dessert for one of my favorite movie stars, George Clooney or Meryl Streep, I’d bake this galette because it is simple, rustic, and honest. If you want to serve it to a large group for a special gathering, the recipe doubles easily to make a 12-inch galette. Accompany with a dollop of whipped cream or vanilla ice cream and you have a totally scrumptious home-style dessert. —Marcy

To make the pastry, combine the flours, granulated sugar, and salt in a food processor and pulse until blended. Scatter the butter over the flour mixture and pulse until it looks like coarse sand. (Alternatively, combine the flour, sugar, and salt in a bowl and work the mixture with a pastry blender until it has a sand-like texture.) In a small bowl or cup, whisk together the 1 egg and the milk until blended, pour into the food processor or bowl all at once, and pulse or gently mix by hand until the dough forms a rough clump. Do not overwork the dough to avoid toughness.

Lightly flour a work surface. Transfer the dough to the floured surface, form it into a ball, and then flatten into a disk 1 to 11/2 inches thick. Don’t knead it! Wrap it in plastic wrap and refrigerate for at least 11/2 to 2 hours or for up to 1 day.

When the dough is well chilled, preheat the oven to 375°F.

Remove the dough from the refrigerator and let it warm at room temperature for about 10 minutes. Meanwhile, make the filling. In a small bowl, stir together the granulated sugar, the flour, and the cinnamon, mixing well. Place the peaches in a bowl, sprinkle the sugar mixture over the top, and toss gently. (If the peaches are tart, you may want to add a little more sugar.)

Lay a large sheet of parchment paper on a work surface and dust the parchment with flour. Place the dough on the floured parchment and roll it out into a round about 11 inches in diameter and 1/8 inch thick. Transfer the pastry with the parchment to a rimmed or rimless baking sheet large enough to accommodate the pastry round comfortably. Starting 1 to 11/2 inches from the edge of the round, arrange the peach wedges in a single layer in concentric circles, continuing until you reach the center of the round. Fold the outer edges of the pastry over the peaches, creating overlapping folds as you work around the perimeter. If your peaches are extra juicy, leave the extra juice in the bowl so that the filling does not overflow in the oven. Brush the pastry border with 1 tablespoon beaten egg and then sprinkle lightly with the turbinado sugar.

Bake for 50 to 60 minutes, until the crust is golden and the filling is bubbling. If your galette has a lot of juice, you may want to place a second pan on the lowest rack in the oven under the baking sheet to catch any juices that overflow.

Let the galette cool on the baking sheet on a wire rack. Cut into wedges to serve.