"The last bit of advice he gave me before I went into production was simply to enjoy every moment of the process and to be grateful for the opportunity."

When I applied to the CAAM Fellowship last November, I was in development on my first feature film, Run the Tide, with a projected production date for sometime during the fellowship program. I’ve been in development on one feature or another for the past five years, and nothing had come of any of it yet. So I had no real way of proving in my application that this was really going to happen. Moreover, after all of the ups and downs of the previous few years, I myself only had moderate expectations that it would actually come together as planned. But still, I applied. And still, I promised that it was going to happen. Luckily, the selection committee bought it.

By the start of the Fellowship last March though, everything had changed. My short film Fatakra, which had played CAAMFest in 2011, landed in the right hands. An experienced producer came on board, a legitimate star gave us a verbal commitment, and a production company agreed to finance the project. This was the closest I’d ever come to seeing one of my films actually get made.

With Fellowship Director Karin Chien’s guidance, I honed in on Dennis Lee as my mentor. He’s a successful independent film director tackling subject matter much like the films that I hope to make. He’s completed two features (Fireflies in the Garden and Jesus Henry Christ) and still keeps going. His two films are very different stylistically, so he can speak to his artistic choices very consciously. He has a background as a teacher. And most importantly, in a city like Los Angeles, he lives just five minutes from me! 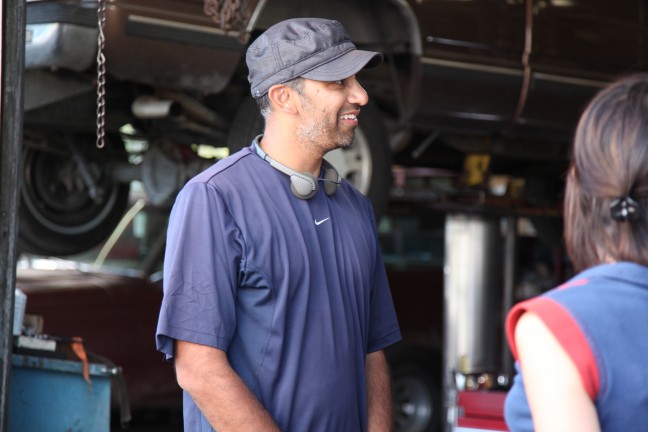 When the Fellowship first began, Dennis and I met for a general introductory meeting. I was already in the thick of pre-production wading through casting sessions and department head interviews. So our meeting shifted from “Hello, pleased to meet you” to “What the #$%& should I be doing?!” The week before production started, I emailed Dennis again. He graciously figured out a way to squeeze in another meeting on the day before I began shooting. Directors rarely get a chance to see how other directors work. So I quizzed him on his bed-side manner on set. Our last meeting was just a week after production where Dennis allowed me to decompress and talk through the post-production process. I’m currently editing the film and plan on calling him up soon to get his feedback on the cut.

Over our three meetings, Dennis’ advice was sometimes optimistic, sometimes poetic, but always realistic and honest. That’s what makes the mentorship program so great. I was surrounded by a talented and intelligent team of people on my film—all of whom had wonderful ideas and advice. However, I soon realized that as a director, everyone lobbies you with ideas based on what they think is best for the film. That’s their job. Your job is to make decisions that serve your vision. Having Dennis as a mentor gave me someone to turn to for advice who not only had been there, but also someone without any vested interest in the film. His distance from the project gave him a unique perspective. The last bit of advice he gave me before I went into production was simply to enjoy every moment of the process and to be grateful for the opportunity. He couldn’t have been more right!

We’re currently in post-production on Run the Tide and plan to have it ready for the festival circuit in 2015. Here’s the log line: When their drug abusing mother is released from prison determined to rebuild their family, Rey kidnaps his younger brother Oliver and escapes their desert home for the California coast.

Soham Mehta is an award-winning filmmaker who strives to make work that provides avenues for different communities to better understand each other. Fatakra, Mehta’s graduate thesis film, was awarded the Student Academy Award, the Directors Guild of America Student Award, and over a dozen jury and audience awards while playing at over seventy-five film festivals worldwide. (Watch Fatakra on PBS). Other short films directed by Mehta include Survivors, Released and Revenge of the Desis. Mehta also co-wrote the feature film Where’s the Party, Yaar? starring Kal Penn. Mehta comes to film from an extensive background in theater. He founded Shunya, a theater troupe dedicated to providing a voice to the South Asian American experience. Born in India, Mehta’s family immigrated to Texas when he was just four years old. He received both his undergraduate degree in theater and his MFA in film from the University of Texas at Austin.

Find out more about the 2015 CAAM Fellowship Program. Applications due November 24, 2014.