The month of October is time to celebrate many things: Halloween, Columbus Day (or rather, Indigenous Peoples’ Day), National Nut Day (yes, that’s actually a thing), and, of course, Filipino American History Month.

In 1991, the Seattle-based Filipino American National Historical Society (FANHS) decided to name the month of October as Filipino American History Month—and it wasn’t just a random month that the FANHS drew out of a hat. The month commemorates the first documented Filipinos to land on what is now known as the United States.

Over 20 years later, we continue to celebrate the Filipino history and culture in the United States. From science to politics to entertainment, the accomplishments of Filipino Americans and what they have contributed to society have been great and continue to grow.

As many of you may or may not know, there are plenty of Filipino Americans in media and every time one appears in the media, we (yes, I am of Filipino descent) tend to get super excited. Sometimes more excited than we need to be. But why shouldn’t celebrate our brothers and sisters? We are incredibly supportive of them, not unlike an obsessive stage parent.

During the month of October, our praise for our fellow Filipino Americans tends to go off the charts, particularly in the world of entertainment and media. You’ll find many people making lists and singing odes to prominent Fil-Am stars like Bruno Mars, Rob Schneider, Lea Salonga, Jokoy, Charice, Dante Basco, and Vanessa Hudgens. Don’t get me wrong, these celebrities are great and talented, but there’s always room in the spotlight for other artists and personalities. Here Part I of our list of some Fil-Am media makers who you may or may not have heard of that deserve your attention during Filipino American History Month—and beyond.

Jerell Rosales: In 2012, Jerell Rosales’ film Born to Dance This Way won the Director’s Spotlight Award and the award for Best Editing during the UCLA School of Theater, Film and Television Festival. His film premiered at the Director’s Guild of America during the Director’s Showcase which has been a platform for the earlier works big-time directors like Alexander Payne, Gore Verbinski and Justin Lin. His current short film, No, No, Homo is making its festival rounds and his upcoming Indiegogo-funded project Britney-Holics Anonymous: A Spear-itual Awakening is slated for release in 2015.

Patrick Epino and Stephen Dypiangco: With their unmatched and distinct style of unconventional humor, filmmakers Patrick Epino and Stephen Dypiangco created the PBS Digital Studios web series, The National Film Society. This gives them the opportunity to make YouTube videos about their lives, pop culture, movies, and as Dypiangco says, “their ups and downs as filmmakers in L.A.” The two are also successful independent filmmakers and their recent film Awesome Asian Bad Guys premiered during CAAMFest 2014 and continues to kick ass at film festivals around the country.

Jon Jon Augustavo: If you enjoyed the music videos for Macklemore’s “Thrift Shop”, “Can’t Hold Us”, and “Same Love,” then you should be praising the filmmaking talent of Jon Jon Augustavo. In addition to winning an MTV Video Music Award and being nominated for a Grammy, the Seattle native has a collection of short films such as How to Disappear Completely and When the Wind Stops that will impress as much as his music videos.

Matthew Libatique: As a master cinematographer, Libatique has been the go-to man for acclaimed director Darren Aronofsky. He was the director of photography for Pi, Requiem For a Dream, The Fountain, and his most recent film Noah. He even snagged an Oscar nomination for his work on Black Swan. In addition, to that he has worked on major blockbuster like Iron Man and in Justin Timberlake’s music videos.

Liza Lapira: Instead of playing “Asian gal pal,” Lapira has been known for playing “Gal pal who happens to be Asian.” All of her roles as of late have been non ethnicity specific and have shown her range as an actress—but she really works the comedy well. In the movies you might recognize her as Emma Stone’s snarky friend in Crazy, Stupid, Love. On TV, she was the clingy/obsessed neighbor in ABC’s short-lived (and highly underrated) Don’t Trust the B- in Apt. 23. She currently is starring alongside Josh Duhamel, Janet McTeer, and Kal Penn in Vince Gilligan’s CBS crime drama Battle Creek.

Jose Llana: Naturally, Broadway actor Jose Llana has been going for Asian-centric roles on Broadway. He’s starred in productions of Flower Drum Song, The King and I, and landed the role of Ferdinand Marcos on the critically acclaimed Off Broadway hit, Here Lies Love, a musical about the former first lady of the Philippines, Imelda Marcos. In 2013, he was pleasantly surprised to score the role of the vicious Bill Sikes in the Papermill Playhouse production of Oliver!, a role that has usually gone to white actors. 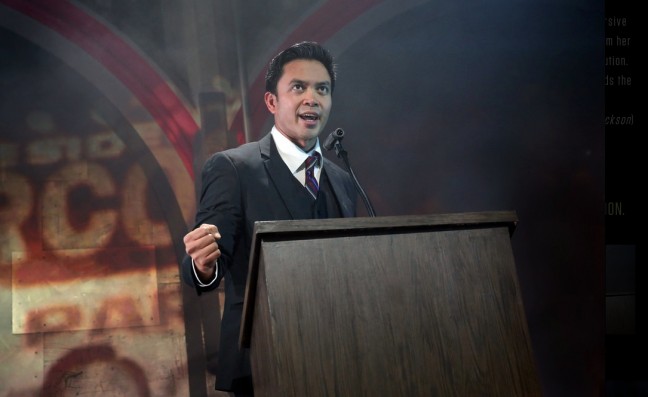 Dave Bautista: He may have been widely known as “Batista,” WWE superstar, but this year, Dave Bautista has become a bonafide movie star—thanks to the summer’s biggest blockbuster The Guardians of the Galaxy. He played Drax the Destroyer in the runaway hit, but I expected him to be nothing but a talking pile of muscle and a throwaway character. I was proven wrong. Very wrong. He surprised audiences with his acting abilities (and humor) by holding his own with fellow scene stealers. (Side note: he did cry when he found out he got the part. That would explain his dedication and why he was so good in the role.) Next up for Bautista? Rumor has it that he is going to be a henchman in the next Bond film.

Read PART II of Dino-Ray Ramos’ list here, which includes reality stars, comedians, a DJ, a composer, an entrepreneur and an activist.