“How can artists sustain themselves creatively, spiritually, emotionally and financially?”  asked Karin Chien, founder of the CAAM Fellowship Program.  She had gathered a panel of three former mentors (Steve Tao of Bad Robot; Angela Cheng Caplan, literary manager at Cheng Caplan Company; Claire Aguilar of ITVS) and two former fellows (Soman Chainani, author and screenwriter of The School for Good and Evil; and documentary filmmaker Johanna Lee).  The panel, and the discussion that it spawned, brought a real sense of community and support to Pa’ina lounge Sunday morning. Community is not so much an entity as it is a creative act, and not surprisingly, Chien said that she founded the program in order to generate community for herself and others. This year there were over a hundred applicants for four or five positions, making it more competitive than MIT, but less competitive than China’s Academy of Performing Arts as we saw in The Road to Fame.  The good news is, you don’t have to apply to a program to enjoy the work of the incredible artists at CAAMFest, and connect with other film-lovers. All you have to do is buy a ticket, and you’re guaranteed admission! CAAM U. stays open til Sunday night. Come on out! (I really loved Ilo Ilo, Anthony Chen’s debut feature that has won 29 international awards including CAAMFest’s Remy Martin Filmmaker award; and The Missing Picture, Rithy Panh’s incredible Oscar nominated doc, which is playing again at the PFA. We’re here all week, folks!) 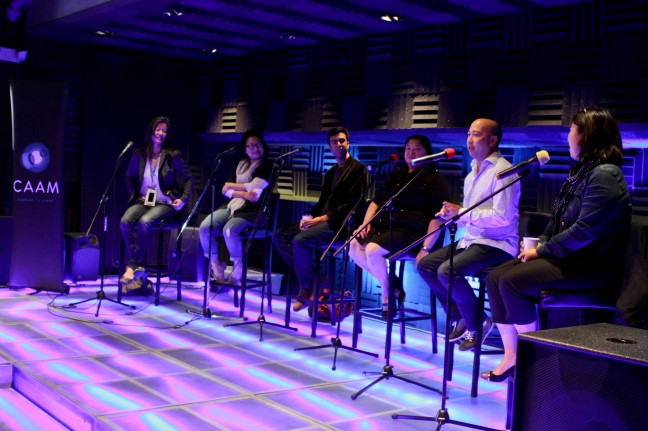 Chien mentioned the difficulties of supporting oneself as an independent producer, leading to questions of how does one define success on a personal level. Asian Americans, she said, have a tendency to “go it alone” and go against their families. Some parents of artists were described as reacting with tears or curses when they learned of their children’s intentions. Probably every artist out there has experienced some version of a lack of emotional support. And while doing art can be enormously gratifying internally, it’s not easy to deal with the intermittent validation of audiences and even friends and families, not to mention being paid reasonably.

All the more important to have supports like the CAAM Fellowship Program and CAAMFest. Your enthusiasm as an audience member means a lot to people who put in hours and heart to create a film, poem, performance (or blog post). Community support also helps us artists understand different perspectives and refine our work. Chien stressed the importance of not “going it alone” and finding friends and community along the way. We always journey towards a new home. Sustainability, then, is about community.

Angela Cheng Caplan highlighted diversifying one’s career. She thinks of her clients broadly, as “storytellers and world creators”, and not simply as novelists or filmmakers, for example. She said, “know three things that you love to talk about that will connect you. Lead an interesting life.”

Soman Chainani said he came out of film school with debt. Having a steady income tutoring gave him some breathing room to focus on his art, so he wouldn’t feel so desperate. “Panic and artistic creativity are at odds” in the long term, he said. “Bet on yourself (with your own funds and time) so you give yourself the best shot.” He or Chien mentioned an adage: “If your investor needs their money back, don’t take it.” Chainani invested his advance into expanding his book tour to 20 cities instead of the 5 that his publisher paid for.

Claire Aguilar spoke of the possibility inherent in being in an organization (ITVS) that’s looking for outside-the-box stories from diverse communities, which also helps pay the bills by providing a regular income. Risk taking and talent are important, but there are also “checkboxes” for particulars like team, budget and so forth. “Keep pushing, sell yourself, and find where you can take that risk”.

Johanna Lee had a very interesting story about first being broke and then taking a part time job as a trader on Wall Street. This got her interested in women on the trading floor, and she ended up making a documentary about the subject, and now has many more opportunities and an Emmy. This was a nice example of bricolage, or putting together a “house” with whatever’s available.

I think the panelists took this in the direction of validation – putting oneself in the position to be appreciated by others, so to speak.

Steve Tao focused on flexibility and the ability to market oneself. “Why would someone want to hang out with you,” he asked.  “What makes you interesting? Talk up your career in a fun, engaging and entertaining way (“the most unAsian thing to do!”). Keep your optimism up, and look at everything as an opportunity. “What makes you unique that’ll make people want to work with you?” He told the story of how he got his job with J.J. Abrams, who had interviewed a hundred applicants already in the previous year. Tao launched into his secret passion of collecting frequent flier miles by taking long haul trips and then turning around and coming home. Abrams was fascinated by him, and he got the job. He was able to tell a story about himself, including having Republican Bible Belt relatives, that networks found interesting. He underscored the importance of personal branding.

I’m not sure exactly what branding is, and part of me resists “selling” myself that way, but I guess I could think of it as understanding your own appeal and having confidence in that. Bottom line, we all need some form of validation and respect, we all have some need to be liked, and while it seems weird to put on a persona that calls for appreciation, it’s important to catch someone’s attention in some way. Part of my job is to appreciate people for who they are, not the persona they put on – so I’m still wrestling with this one.

Staying optimistic is important, and several panelists mentioned that. “Don’t wallow in self pity,” said one. But depression and anxiety are real issues, and it’s not just “wallowing” or weakness. Artists expose themselves to vulnerability regularly in the way they look at the world or what they’ve experienced. Creating something out of that vulnerability is a powerful artistic calling. I didn’t quite hear answers on how to cope with frustrations and down times – but Chien’s answer of community seems right on the money to me. Stamina, thick skin – these all make sense.

I was especially grateful to hear Caplan and Chien both mentioned that “it’s not web-based. It’s all face to face.” I’m a big believer in the FTF relationship, so go IRL! “It’s all personal connections,” Tao said. “Conversation is revolution,” said Chien, quoting Grace Lee Boggs. Relationship is spirituality to me – whether it’s your relation to some bigger picture or your relationship to your community. Even if you’re not “religious,” relationships and a sense of purpose and meaning are essential in finding happiness and contentment.

Caplan mentioned leading an “interesting life.” That’s great, but I think everyone’s life is interesting, once you get to talk to them. That’s my experience, anyway. Everyone has a story. Like Lee demonstrated in her work, creativity can be sparked just by paying attention to what you’re experiencing right now.

Current fellow Michelle Krusiec asked an interesting question about her changing perceptions of herself. As an actor, she specializes in ‘anonymity,’ if I understood her correctly. But as a director and producer, the mentors were promoting ‘identity’. That question basically blew my mind. I can relate, because as a psychiatrist, I’m told to be as anonymous as possible. But then as Superfan and as a poet and writer, I have an identity. The way I’ve resolved this is having an identity in my office as well. The idea of shifting identities as an actor is extremely compelling to me, but – wow. Krusiec and the other actors out there – you amaze me. There’s some kind of shape-shifting alchemy you do which seems magical to me. Or spiritual. Deep bows.

(To the panelists:  apologies for any misquotes – if you have any corrections, please contact me or CAAM) 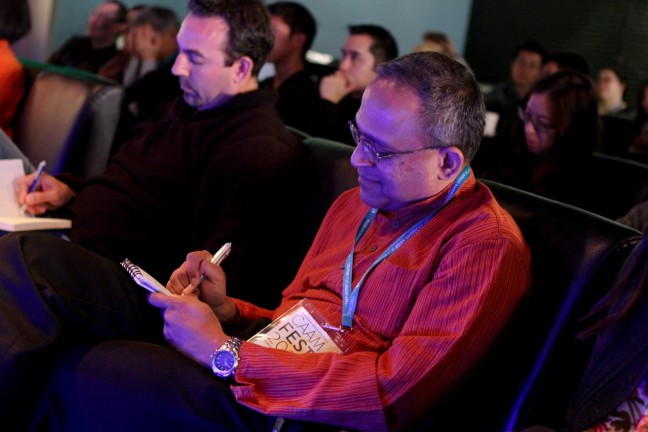 Ravi Chandra, M.D. is a San Francisco psychiatrist and writer.  He writes The Pacific Heart blog for Psychology Today.  You can find him on Facebook, Twitter, and best of all, sign up for an occasional newsletter here, and find out about his upcoming book on the psychology of social networks through a Buddhist lens, Facebuddha: Transcendence in the Age of Social Networks.  Buddhist teacher Sylvia Boorstein says “I think it will be inspiring to many, many people.”  More CAAMFest MOSF blog posts can be found here and here.