Growing up in Central Indiana and Northern Virginia, filmmaker Musa Syeed spent his formative years in mostly homogenous towns, where being Muslim meant trying to fit in while also being an ambassador of Muslim-ness.

“Trying to represent Muslims everywhere in the world, and also just being myself” was one of the challenges around his identity formation, Syeed said.

Syeed’s grappling with these questions as a young person has led to him to create award-winning films as an adult, including Valley of Saints, which won the Audience Award for World Cinema: Dramatic at the 2012 Sundance Film Festival. Syeed is temporarily living in San Francisco by way of New York City, where he was previously a teaching artist at the Tribeca Film Institute. As a recipient of a San Francisco Film Society grant, he’s spending a few months in San Francisco working on a film script. The story focuses on a disgraced doctor from India who comes to America seeking to rebuild his life.

Most recently, Syeed’s short film, The Big House, shot in Yemem, selected at this year’s Sundance.

His filmmaking, rooted in his culture and through the immigrant experience—his parents are from Kashmir—has led him full circle back to engaging with these questions he struggled with growing up. Earlier this year, CAAM engaged Syeed to be artistic director and lead instructor for an innovative initiative called Muslim Youth Voices Project (MYVP).

“Our congratulations to the Center for Asian American Media on receiving the Building Bridges Program grant for their Muslim Youth Voices film initiative,” said Zeyba Rahman, senior program officer for the Building Bridges Program. “We look forward to their training American Muslim youth in filmmaking techniques and the fresh perspectives that will emanate as a result from the films they make.”

Like CAAM’s Himalayan Youth Voices Project of 2012, this new project hopes to surface and support narratives from emerging or underrepresented segments of our communities. Tham believes “It’s incredibly important to find ways to add authentic voices to the national dialogue on race, culture, and religion. Otherwise, if we remain media bystanders, we’ll lose a part of ourselves and our history in the larger American landscape.” 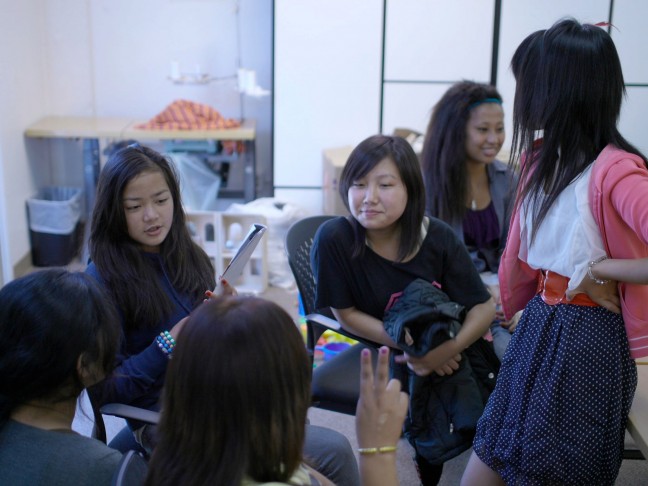 To reach diverse communities, the project will launch with a series of filmmaking workshops in six cities across the United States, open to Muslim youth of all ethnic backgrounds. The project is designed for them to develop their own compelling stories.

This project is particularly powerful for youth growing up post-9/11. Approximately 5 million people living in the United States identify as Muslim. Yet, it’s still a group that is heavily misunderstood. A Gallup study from 2009 showed that 63 percent of Americans know little to nothing about Islam, and a study shows that 65 percent of Americans have an unfavorable view of Muslims.

Media, filmmaking and storytelling have a potential to change peoples’ views about each other. “Growing up in the Muslim community, there was always a difficult relationship with the media,” Syeed said. “There was always a sense that we were being stereotyped and marginalized. People were always blaming the media for a lot of things, but there wasn’t a lot of direct engagement with the production of media. Maybe because we felt like it was so antagonistic, or it just didn’t feel like a great career choice to a predominantly immigrant community.”

The Muslim Youth Voices Project hopes to change that, by putting the tools, and medium, into the hands of Muslim youth themselves.

The project, launching in New York City in early August, and in Fremont, California, in mid August with an intensive, one-week workshop, will focus less on the technical aspects of filmmaking. “The technical stuff can always be learned, and it’s always changing anyways, so we want to focus on the more essential foundations of storytelling,” Syeed said. Youth will be able to learn from each other, as well as share their voices with the larger world. Co-teaching the workshops in Fremont will be Mustafa Davis, co-founder of Ta’leef Collective. Davis is a photographer, filmmaker and teacher whose work has been showcased on BBC, PBS and MTV, among other places.

Filmmaking, at its core, is about the human experience and connection with others, according to Syeed. “You know, however isolated or lonely you might feel in who you are, you realize that through storytelling there’s something about you that resonates with other people, that there’s some essential human connection,” he said.

To participate in the inaugural workshop series in New York, complete an online application by July 14, 2014. Or to join the Fremont workshops, apply by July 18, 2014 by clicking here. To learn more about MYVP and where the project is headed next, please email youthvoices@caamedia.org.