Memoirs of a Superfan Vol. 9.1:  Goodbye Snake, Hello Horse, and Hashtags on a Plane

The Horse snorts and stamps his feet, rears up on his hind legs.  He looks out over the land, surveying his goals.  And then he runs, galloping mightily across the land, racing across peaks and valleys.  He doesn’t own the land, but he knows it – a much better possession in the changing fortunes of time.  He runs like the wind itself, the embodiment of wind, the lung-ta, Tibetan for Wind Horse, also the flag that carries prayers to heaven.

Last year was the Year of the Snake.  I welcomed it as a year of change and transformation, the snake shedding its skin, just as SFIAAFF became CAAMFest .  We did indeed see victories for Gay Rights, the Violence against Women Act was reauthorized despite Republican resistance, and the D.C. council voted to change their football team’s racist name, among other successes. We saw hashtag activism hitting a high point in our community with #NYAS (See Hashtag Wielders Unite!), even as some of us felt that Twitter didn’t quite allow us to address the structural problems and psychological underpinnings of racism and sexism (my own I Have Met the Internet and It Is Not Us, Kai Ma’s NYAS is Great, Now Can We Get Some Real Social Change, Jennifer Pan’s The Labor of Social Media).  Still, this aspect of snakey-transformation was a welcome reminder that these conversations needed to happen.  Instead of snakes on a plane, we had hashtags on a plane.  Some snakes were dodgy in their skin, as Katy Perry donned quasi-Geisha gear to show what she called “Unconditional Love”, layering herself in stereotypes we’d rather shed and debunk.  I did my best to rip off her snakeskin in three blog posts, starting with “Yes, Katy Perry’s Performance Was Racist.  Here’s Why.”  In the Year of the Snake, we went viral. Ebola even.  Snakeskin massed to criticality.

We were also reminded that some injustices require more than the shedding of skin; we’ve spilled too much blood to just come out a similar version of what we were before. The George Zimmerman verdict, the Michael Dunn decision, and continued mass shootings remind us that America is gripped by profound sickness.  Going viral on the internet can’t match this malady.  And beyond America, even a casual glance at the news reminds us of the manifold symptoms of suffering, from starvation and poverty to climate change and war.  While it is ordained that the Snake precede the Horse, the Horse is now on the world stage, and we hope he will be an even more satisfying powerhouse of our champing at the bit, horsepower inclinations.

Rainbow nails and dissidents in jails,

between them, a storm’s a’ comin’.

through them all, a storm’s a’ comin’.

Steady your sails, there’s a storm a’ comin’.

The Horse is here.

I called my horse “he”, but horses come in all genders and persuasions.  Stallions and mares, unicorns and yearlings, broncos and bronies, steppers and ponies, neigh-sayers and nags, mounts and studs, vaulting bucks and cantering colts, Seabiscuit and Merrylegs, work horses and hobby horses, war horses and winning horses named “Peace and Justice”.   There are the horses we learn to ride, harnessing and taming an animal strength.  And there are the horses that run free:  the unvanquished heroes, the unconquered herd.

We’re all part of the unconquered CAAM herd, and CAAMFest is our watering hole.  Here’s our chance to slow down for a moment, step off the steppes, and mingle.  Let’s find each other again.  We’ve been apart too long.  Let’s turn off the little screens, those insistent distractions, and come together in real space, next to each other.  Let’s nuzzle, if we choose.  Let’s frolic, let’s gambol.  Let’s come together and get happy, like a room without a roof, but with lots of hooves. Let’s laugh together, and cry.  Let’s be present and remember how special it is to be connected in this wild, involving, evolving life.  “The powerful play goes on, and you may contribute a verse,” goes the Apple commercial to the tune of Walt Whitman.  He didn’t need an iPad, and neither do we.  All we need is to be with each other, see each other, know each other, and grow.  And just like the CAAM Staff badges this year, we have serious and zany sides.  We can horse around, that’s for sure.  Horse play is in this year, and lila can be our healer.

There’s also Silver, the Lone Ranger’s horse, and Scout, Tonto’s.  Tonto’s great and all that, but speaking as someone who was called Tonto in my youth (taunted? Well, not exactly, and I’ll tell you it only happened once, I made sure of that), I’ll leave you with this quote from Samuel L. Jackson: 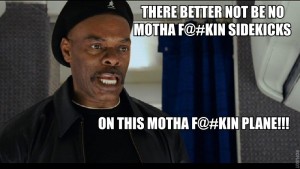 Ravi Chandra, M.D. is a San Francisco psychiatrist and writer.  You can find him on Facebook, Twitter, and best of all, sign up for an occasional newsletter here, where you can find out about his upcoming book on the psychology of social networks through a Buddhist lens, Facebuddha: Transcendence in the Age of Social Networks.  Buddhist teacher Sylvia Boorstein says “I think it will be inspiring to many, many people.”