Socola Chocolatier’s mascot, Harriet the Flying Alpaca, will be finding herself a more permanent place to live in San Francisco’s SOMA neighborhood. Socola Chocolatier’s new store and café is slated to open just in time for Valentine’s Day on February 10th. 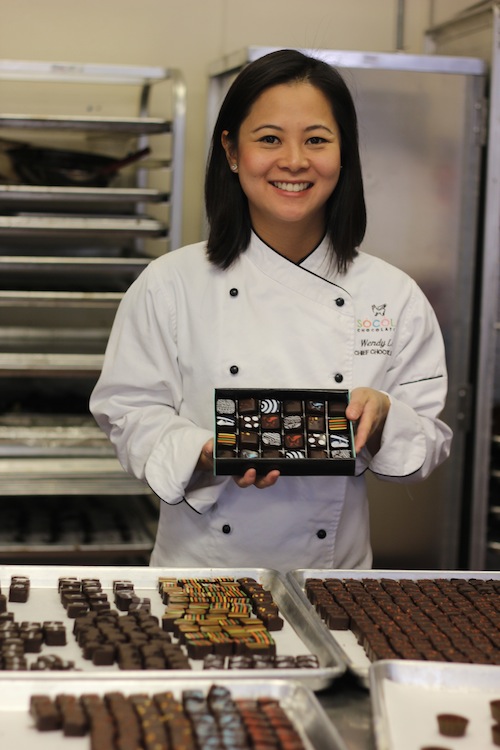 For Wendy Lieu, a first generation American whose parents were boat people from Vietnam, opening a chocolate café in San Francisco may seem like a whimsical pipe dream. Lieu found herself at the age of 19 selling homemade chocolates at a farmers’ market in Santa Rosa. She, along with her sister, Susan Lieu, the business and marketing guru behind Socola, later started selling their chocolates—in flavors such as sriracha, guava and ca phe sua (Vietnamese coffee)—wholesale to specialty shops like Bi-Rite Market and supermarkets like Whole Foods. 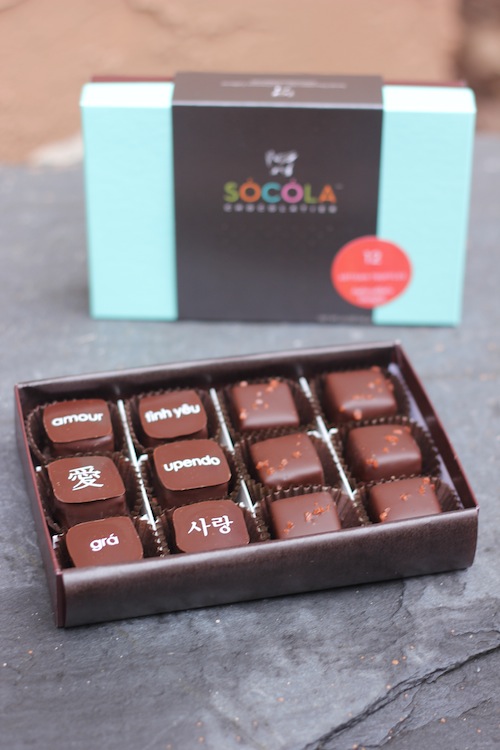 “I always had a dream of creating a store,” says Wendy Lieu, owner and chief chocolatier at Socola, as we peek into the under-construction, future home of Socola Chocolatier + Barista. In addition to their chocolates, which will be made on-site, they will serve hot chocolate, Four Barrel Coffee, tea, and pastries such as a guassant (guava croissant with cheese) from Patisserie Philippe, where Lieu externed. Customers will be able to choose from Socola’s signature truffles to melt in a cup of espresso—a truffogato—as well as having a tea selection that is the same tea used in the tea-infused chocolates, with flavors such as jasmine, chai, earl grey, and matcha. 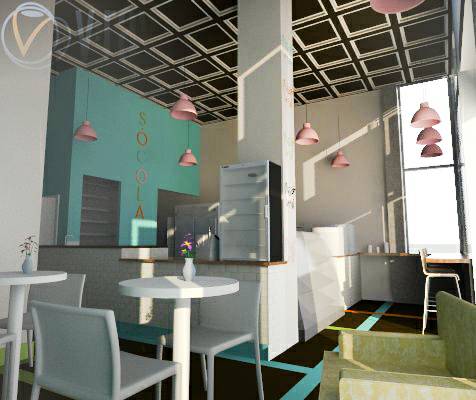 Socola is the word for chocolate in Vietnamese, a nod to Lieu’s Chinese Vietnamese heritage. Lieu’s mom was pregnant with her when her family left Vietnam as refugees in 1982. Her parents spent two years in a refugee camp in Kuala Lumpur—where Wendy was born—before they eventually settled in Emeryville, CA. “I escaped many times by boat, in a small boat, and finally I made it,” says Tom Lieu, Wendy’s father, in a recent phone interview. Once there, Wendy’s mother learned to do nails and her father delivered papers. After years of saving, her parents opened their own nail salon.

Lieu remembers booking manicure and pedicure appointments at the nail shop, as young as 8 year-old. “We were hustling!” exclaims Lieu, as she reminisced over her formative years. They sold Girl Scout cookies and their homemade friendship bracelets while working at the nail salon. ”We’ve just grown up being business women and entrepreneurs.” 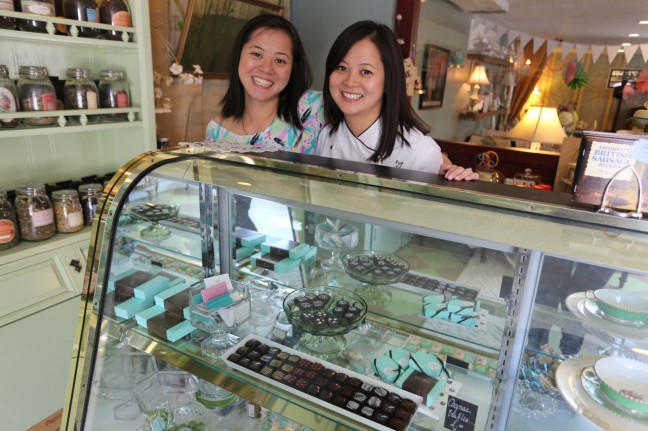 Growing up in a Vietnamese household, Lieu was no stranger to cooking and the love and appreciation of food. She scoured cookbooks and received “weird gifts” like a sandwich press, and even made her own French bread when she was nine. However, there was one food item that baffled her—chocolate.

While working at Sanrio Surprises, a Hello Kitty store in a mall, Lieu, then 15, would pass by See’s Candies everyday, and wonder how chocolates are made. (See below for a link to Lieu’s Jasmine Tea Truffle Recipe). “We’d obviously eat their samples and buy chocolates too but eventually one day I was like, ‘Wait! How did they make that?’ I loved to create things, but I couldn’t figure out how to make chocolate.”

She started poring over magazine recipes, experimenting with ingredients, and saving up the wages she got from working at the Hello Kitty store to buy chocolate-making supplies.

Her big break came when their Santa Rosa neighbor, a marketing person for KSRO, tried her chocolates. Within a week, Lieu found herself on the radio talking about her hobby and newly-minted chocolate business. “Everyone we knew was calling in and they were like, ‘Wendy! We didn’t know you started a business.’” “And I was kind of like, ‘Me neither!’” 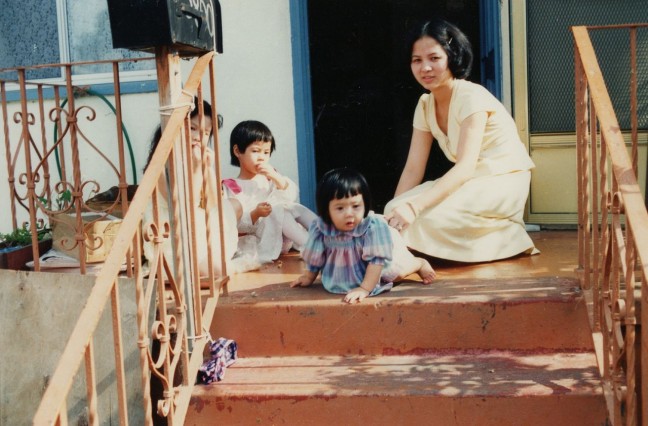 Wendy and Susan with their late mother, Jennifer Ha, in El Cerrito circa 1986. Photo courtesy of Wendy Lieu.

Though Lieu clearly had a talent for chocolate-making, she felt like she didn’t have the support of her father, who raised Wendy and sister Susan as a widowed single parent after their mother passed away when Wendy was 14. As with most immigrant parents, Lieu’s father’s desire for a better life for his children played a very significant part in his view of the sister’s budding business. “’I didn’t bring you to the U.S. so that you could make chocolates,’” Lieu recalls her father telling her. Her father wanted her to go to college and get a stable job. Lieu said that was the toughest part—seeking her father’s approval.

So Lieu went on to college, graduated and pursued a career at a major consulting firm. However, chocolate remained her side hustle, and passion. She maintained her chocolate business with her sister and attended pastry school at night and during the weekends at Tante Marie.

In 2012, Lieu made the decision to work full time at Socola. It wasn’t the challenge of owning a business that worried her, or the boys’ club of chocolatiers. With names like Joseph Schmidt , Jaques Torres, and Dolf Teuscher , the world of chocolate is a mostly-white, male boys’ club. “I taught myself and sometimes it feels like I’m not as credible as other people, but my chocolates speak for me,” Lieu said. “Delicately daring” is how she describes her chocolates. 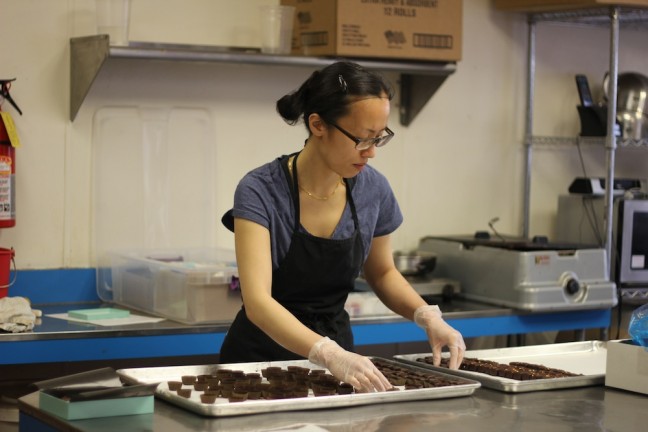 Lieu was worried about how her father would react.

They were driving from Houston to Austin when she broke the news—that she was quitting her job and focusing on chocolates fulltime. “If I put 100 percent of my energy into it I don’t know what it could be but it could be something amazing and I would rather try for that—to see what that unknown is going to be.

His reaction was one she did not expect. “He started tearing up and then was like ‘That is exactly what me and your mom said when we left Vietnam. Do it.” Lieu still gets teary-eyed recalling that moment of her dad’s acceptance. 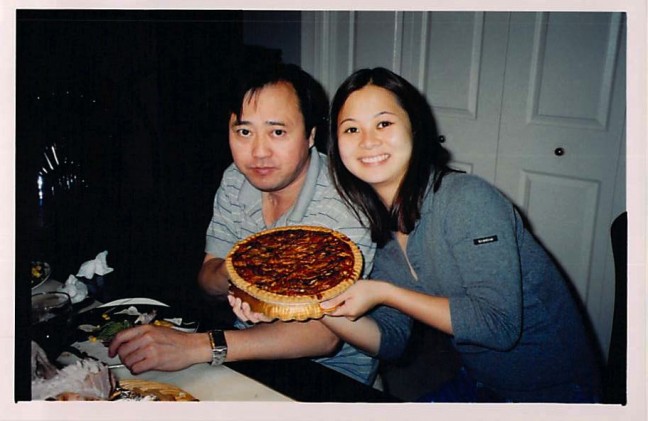 Wendy with her father, Tom Lieu, during a Thanksgiving holiday celebrating with a pecan pie. Photo courtesy of Wendy Lieu.

Lieu’s come a long way from the teenage girl who just had a passion for making chocolates to a full-fledged business woman and chocolatier.

“I’m very proud and I think she will be very successful,” says Lieu’s father in a recent interview. “I’m very happy.”

Socola Chocolatier + Barista will be opening its doors just in time for Valentine’s Day. Earlier that week, Lieu willing picking up her father, who’s flying in from Texas to celebrate with his daughter.

Ashlyn Perri is the Digital and Interactive Media associate for the Center for Asian American Media. She was born, bread and buttered in a Japalian (Japanese & Italian) household in San Francisco. This article was initially published at KQED’s Bay Area Bites.

Off the Menu: Asian America is a multimedia initiative between the Center for Asian American Media and KQED, featuring a one-hour PBS primetime special by filmmaker Grace Lee (The Grace Lee Project, American Revolutionary), original stories and web content.

Wendy Lieu will be honored next month on March 8th at CAAMFeast, an evening of food tastings, films, and a live auction fundraiser honoring the achievements of Asian American chefs and foodmakers. CAAMFeast  takes place Saturday, March 8th, 2014 from 6-9pm at One Kearny Club in San Francisco.

Off the Menu: Asian America is a multimedia initiative between the Center for Asian American Media and KQED, featuring a one-hour PBS primetime special by filmmaker Grace Lee (The Grace Lee Project, American Revolutionary), original stories and web content.