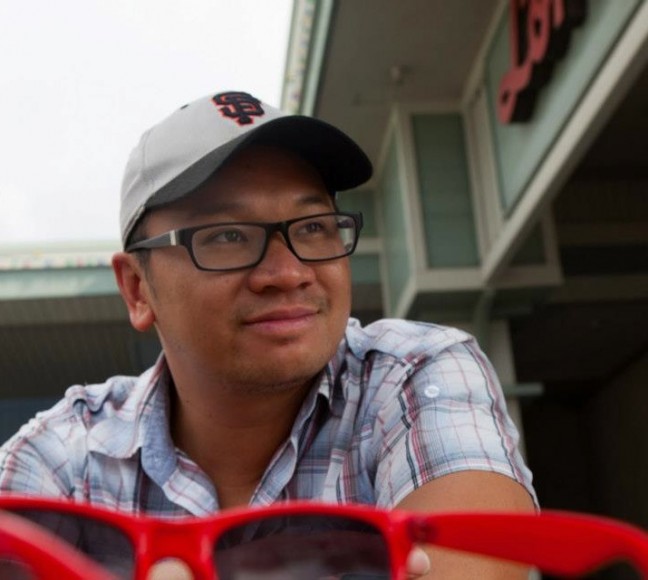 If you are familiar with the web videos from this past CAAMFest and more recently the narrated home movies on the Memories to Light website, then you have seen John C. Liau’s work. John is a close member of the CAAM Family and has produced or co-produced much of our recent web video content including an upcoming series of web shorts from actress Cherylene Lee’s memoirs, “Just Like Really.”

CAAM’s Program Manager, Davin Agatep, recently sat down with John to talk about the short films they created together for the Memories to Light website.

What is your history working with CAAM?
John: It’s actually been a long relationship with CAAM. I started off shooting at the film festival. It’s a crazy two weeks, where I’m running around, just catching the last half of a movie, shooting q&a’s, all of the events and the concerts. After that I went to Syracuse to learn about multimedia work. When I got back, CAAM asked me to produce some promotional videos for the Film Festival. I got a chance to work with a lot of different people. Today, with CAAM, we’re developing multimedia storytelling not just content for festival. It’s been a fun ride with CAAM so far.

How did you get involved with MtL?
John: Stephen Gong asked me to come and produce a promotional video to let the public know what MtL was all about, behind the scenes at the Internet Archive. The group that does the digitization there (the San Francisco Participatory Archives Group) were treating the videos with a lot of care, almost like a small child…they’re really focused. It was a small team. Then I talked to [you] about different ways that filmmakers are going to be able to use this footage…to tell the stories of these people who are still living today. I was immediately interested in delving into this world of all this footage. I was going to tell these stories in meaningful ways.

What’s it like creating these videos?
John: It’s really interesting to me. I’m used to having complete control over videos because I’m shooting them myself. With the home movies, I don’t have control of the footage…the shots, the quality etc. Getting the back story from these families is probably the funnest part. When you just watch the videos you immediately want to know more about them. It was fun with Brian Gee’s videos just hearing him describe him describe his family vacation across America.

Who influences and inspires your work?
John: Yeah, my peers at Syracuse. They’re all doing really well. My friend Andrew Hida he’s done a lot of stuff in New York City; Bob Miller … My professor Bruce Strong taught me how to do more than work the gear… that there has to be a good story behind everything that you make.

What would home videos of you be like if you did find some to submit to the archive?
John: Running around, throwing stuff at my sisters. Just being a brat. Typical youngest child behavior!