“The LuLu Sessions offers us insight not only into a deeply connected relationship but the beginning of an intimacy between two women that outgrows our understanding of friendship and partnership – and maybe even life.” – L.A. Asian Pacific Film Festival 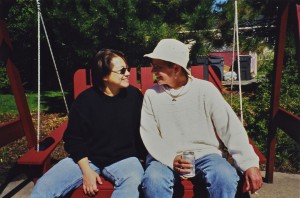 Tickets: $10. Purchase tickets on Eventbrite. Tickets will be available at the door if they aren’t sold out.

PSSST. We have a few more tickets to give away! E-mail Jen at jchu@caamedia.org with subject line LULU for a chance to win.

October is National Breast Cancer Awareness Month.  In honor of this month and the efforts to bring awareness and visibility to breast cancer, CAAM is proud to co-present a special screening of S. Casper Wong’s documentary THE LULU SESSIONS on the evening of Friday, October 18th at the Ninth Street Independent Film Center. Wong will be in attendance at the screening and available to answer audience questions after the screening.

This deeply personal and surprisingly humorous film reflects on the last 15 months of the life of Dr. Louise (“Lulu”) Nutter, a scientist and professor who devoted her life to cancer research. At age 42 when she was diagnosed with final stage breast cancer, the filmmaker S. Casper Wong her best friend and ex-something, visited her every other week to capture last months of Lulu’s life. In the process, Wong also documented the transformation in their relationship during their last journey together. Their story is a powerful, stark testimonial about the tenacity of love and our capacity for pushing past limits in love, friendship, forgiveness and life itself, in the face of impending mortality. As seen through the eyes of someone who couldn’t be more different – a Chinese-American queer woman, Casper makes Lulu’s last journey more broadly accessible through the making and distribution of THE LULU SESSIONS.

The film also screens in NYC October 21-22nd. See where you can watch the film.

Check out Ravi Chandra’s review of The Lulu Sessions on Psychology Today!