We are thrilled to announce that CHINAFORNIA, directed by Ellie Lee, is one of three webseries funded by CAAM’s Web Innovation Fund, an animated and satirical look at a future where California is owned by China! 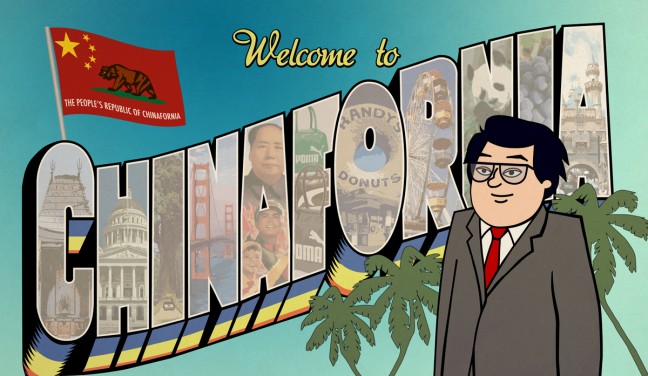 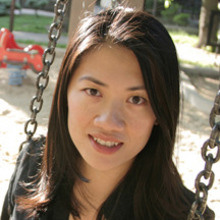 It is culture clash at its finest in the year 2018.  With the inability to pay back China the $10 trillion the United States owes, and the American economy still very much down the toilet, a resolution is made to give the state of California to the Chinese – hence creating Chinafornia.  With Vice Premier Jidong Chen to lead the takeover of the Golden State, it’s a risky move as to whether or not China’s determination and stubbornness and America’s creativity and boneheadedness can come together to create a functional and better world.

Director of Chinafornia Ellie Lee tells CAAM more about the making of this new comedic webseries to be released in 2014!

What inspired the creation of “Chinafornia”?

My writing partner & I had been had been thinking a lot about films from our childhood, reflecting back on how the enemy was often the U.S.S.R. After the collapse of the Soviet Union, Hollywood replaced movie communists with new enemies: aliens, natural disasters & terrorists. Jumping to present day, we imagined that those doomsday storylines might revolve around a new superpower like China attacking the U.S. And then it dawned on us: What if we weren’t attacked? What if we just gave China a state like California, because our hands were tied due to our debt? All of a sudden, the storyline became hilarious, because there was some underlying truth to that scenario. We fear China, yet we are uncomfortably indebted & in bed with them. We thought that tension & this premise could be a really funny vehicle to explore many of the absurdities in current US politics, world politics, and pop culture.

You’ve mentioned on your website that the series combines the styling of both “The Daily Show” and “The Simpsons.”  What is it about satire that you found to be an effective genre for your web series?

Those are two of my all-time favorite shows, and I’m continually inspired by how they’re able to hold a mirror to what’s happening now, in funny & profound ways. When we came up with the premise for “Chinafornia,” we knew we wanted it to be a comedy. We wanted the freedom to address a broad range of issues — from illegal immigration, union-busting, divisively partisan & inept American politics, China’s limits on free press & civil liberties, to the dumbing down of broadcast journalism in America. Using animation & satire seemed like the best way to tell those stories, since all that material is ripe for ridicule & social commentary. Satire can communicate truths indirectly, and we’re hoping that “Chinafornia” will do just that.

Who was the easiest character for you to create and who was the most challenging? Why?

When we were creating the world & its characters, Mr. Chen (Chinafornia’s new leader) seemed to flow quite naturally onto the page. He’s a fish out of water. Because I was a young emigrant to the U.S., I’ve been able to see the world through my parents’ eyes (as immigrants adjusting to the shock of American language, poverty, and culture) and contrast that with my own school-aged Asian-American experiences. As a result, I’ve always been drawn to stories about culture clashes. Culture clashes really define Mr. Chen’s life from the moment he steps foot onto Californian soil. I think culture clashes are such a big part of the American experience, and we love them on our show because they can be hilarious, messed up and endearing, all at the same time.

The hardest character for me was Winnie Chen, Mr. Chen’s daughter. We wanted the audience to develop some empathy for Mr. Chen as a single dad who’s having a tough time relating to his teenaged daughter, so it took some time to get that right. Her character has changed quite a bit from our original idea, and we really disagreed as writers on what direction to go with her. If we can get funding beyond the initial five episodes, you’ll see that father-daughter relationship play out in more detail.

What is your hope for how Chinafornia will be received by audiences? Is there a particular message you intend to address throughout the course of the web series?

There’s so much noise on the internet — it’s hard to get people to notice someone new on the block when there are a trillion other residents living on it! It’s an unusual but very modern cast of characters for an animated show – Chinese autocrats, corrupt politicians, vapid journalists, an uprooted transcontinental family – and it’s packaged with a sharp sense of humor and nods to American pop culture. We hope viewers who find us will really connect with it, and will like it enough to share it with their friends, and come back for more episodes & stories each week. In my dreams, I’d like to be able to get enough momentum and funding to keep doing more episodes with a larger animation staff, and continually build our audience.

As for a message – I think there are many messages in our series, and not just one overarching theme. The shows poke fun at a lot of topics, ranging from stagnant politics to the corporatization & dumbing down of broadcast journalism. Months ago, I found a remarkable YouTube video of a Stanford student solving a rubik’s cube while juggling. On Chinafornia’s account, I tweeted this ridiculous hashtag: #KeepTheAmericansFocusedOnRubiksCubeJugglingSoTheyWontNoticeWhatHappenedToTheirDemocracy”(https://twitter.com/chinafornia/status/307630987012083713).

That pretty much sums up the spirit of the show!

You’ve done great work producing documentary work for public television, what moved you towards creating an animated satire for the web?

Awww, thanks so much for those kind words! I actually started my career as an animator, before I started making fiction and non-fiction films. I have always felt that animation as an art form has a lot of untapped potential and power for telling stories in an unexpected way. My very first film was an animated documentary about homeless women called “Repetition Compulsion” (http://vimeo.com/38369042), and I remember how much of an impact that had on audiences in 1997, because it was something they had never seen before. They could relate to people in the film without any preconceived ideas or assumptions – and in large part, that was due to the filter & dreamscape of animation. When we came up with the premise for “Chinafornia” many years ago, I knew that animation was the best medium for it. Animation allows us to push our comedy even further, creating hyperbolic or absurd situations to underscore our comic-tragic perspectives on current affairs.

What do you think is different about producing a web series versus producing for broadcast? And which is more rewarding?

Producing animation – whether it’s for the web or for broadcast – is laborious and grueling. I’m so jealous that other folks can shoot a live-action short & have it edited & streaming 3 weeks later. It takes us months just to get 5 minutes on the screen. That being said, I feel that I have a lot more autonomy & freedom producing for the web than for broadcast. At my heart, I’m an independent filmmaker, and I love telling stories and finding interesting ways to tell those stories. I love that the internet and social media have created robust avenues for independent artists to directly reach audiences. You’ll find a diversity in online talent & content that you would never see on network or cable channels. And that’s incredibly exciting.

Check out more information on the official website: www.chinafornia.com. The Chinafornia series was presented at “Ready, Set, Pitch” by Lee at the 2012 SF Int’l Asian American Film Festival.  Check out the video: