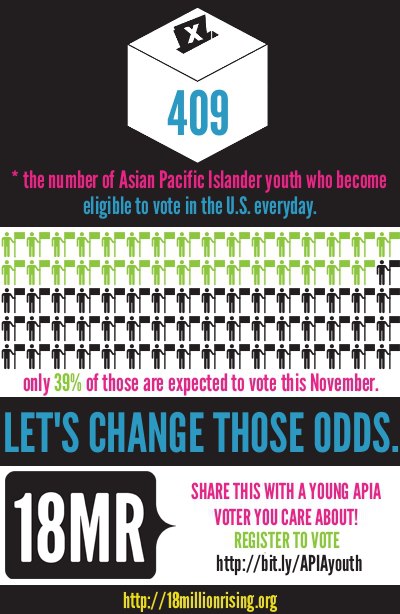 As voter registration deadlines approach be sure that you and your friends, family and community are ready to hit the polls in November. Whether you’ve decided or not on how to vote, registering is the first step. It sends a signal to our representatives that we want them to better represent & address the concerns of our community.

Check out this interactive map on state deadlines.

A message from our friends at 18 Million Rising:

“There are approximately 18 million Asians and Pacific Islanders in the United States, representing nearly 6% of the total population and growing faster than any other racial group (!) Despite that, Asian Americans remain one of the most politically under–organized, under–engaged, and under–represented constituencies: only 55% of Asian American citizens of voting age are registered to vote — the lowest rate of all races.”

Let’s make our voices (all 18 million of us) heard!