Perhaps no family has made a greater impact on Asian American media than the Nakamura family: Robert A. Nakamura, his wife Karen Ishizuka, and their son Tadashi.  During the 30th San Francisco International Asian American Film Festival, the Nakmura Family held a community conversation with film historian and CAAM Executive Director Stephen Gong.

Here is a short statement from Tad on his father:

“I think a lot of filmmakers my age or younger aren’t familiar with my dad’s work.  Some may have read his name in an Asian American studies class or heard about “The Godfather of Asian American media” but most haven’t actually seen his films.  The Conversation with the Nakamura Family program at this years’ SFIAAFF was great because it gave the audience a rare chance to see clips from all of his films.  Watching these clips it’s obvious how my dad has shaped the subject matter, form and function of my own films.  I really want to thank Stephen Gong, Don Young and Christine Kwon for inviting my parents and I to participate in such a special event.  It was the first time the three of us talked in front of an audience about making films together.  Since my dad is retiring from his 33 year tenure at UCLA this year, it was a great tribute to the impact he has had on the landscape of Asian American Cinema.”

“We realized that what community-based filmmakers are blessed with is the passion and persistence of our communities. Without a doubt, our stories and our people are our greatest strengths.”
—Karen Ishizuka and Robert A. Nakamura 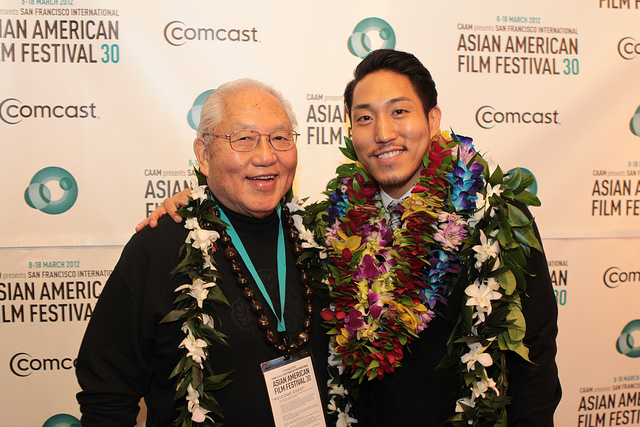 Robert and Tad Nakamura at the premiere of the Jake Shimabukuro Documentary (which Tad directed) at SFIAAFF30, photo by Leanne Koh