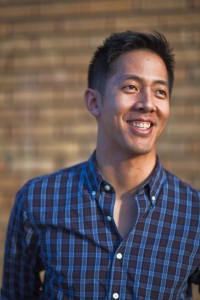 When Karin Chien asked me to write a blog post about what I had learned thus far as the Center for Asian American Media’s independent producing fellow, I confess I was a little stumped at first. Not because I hadn’t learned anything, but precisely the opposite. In just over a month of working with my mentor, producer Gina Kwon, I have been given a trove of invaluable advice. Since Gina has been specifically advising me on my upcoming project, a multicultural romantic comedy called COWBOYS VERSUS INDIANS, I’ll try to stick to some of her more generally applicable advice below.

First, a little context. Gina has produced numerous features, including both of Miranda July’s films, ME AND YOU AND EVERYONE WE KNOW and THE FUTURE, and Michael Kang’s THE MOTEL. In the world of indie filmmaking, producers come in all sorts of flavors. Gina is a creative producer, which means that she is responsible for developing the script with the writer, hiring a director (unless this happens to be the same person as said writer), and bringing the money, the cast, the crew, and the equipment together in the same place at the same time. In short, creative producers are part badass, part professional miracle worker. On a good day, you’re hoping for controlled chaos. On a bad day, you’re praying for a controlled crash.

As Gina’s been helping me with development, most of the following four tips pertain to this particular phase of filmmaking:

1. Keep working at every stage to get the story right. The script will change up until the day you shoot, and the story will evolve until the moment you lock picture. However, talent agents, casting directors, and financiers don’t have the ability to read a script for its potential, nor should they have to. Don’t squander the opportunity to land the right person by sending out a script before it’s ready. Until your director can look you in the eye and tell you that he or she could shoot this tomorrow, it’s not ready.

2. Development is often a process of diminishing returns. Part of what’s so hard about getting the story right is really understanding what you have – what works and what doesn’t. This is a challenge for the producer and particularly the writer, who deal with the script on an incremental, iterative basis. If you and your writer are struggling to move beyond a certain point, consider soliciting smart creative feedback from fresh eyes. The key is to control the process so that the feedback doesn’t overwhelm you or your writer. Too much feedback can be almost as bad as not enough.

3. This means balancing methodical perfectionism with the can-do urgency of “we’re making this no matter what.” This is a fundamental tension in indie filmmaking, without which most films would not exist. As a producer, you want a writer/director who has this hunger. If he doesn’t, that’s a red flag because at the end of the day, if the director doesn’t care about his or her film, then neither will the actors or crew. It’s so important to find a way to harness this drive within the development process. Many of us wish that we could whip through development and get on with the million other steps that we’ll have to address in order to get our films in front of audiences. But the fastest way to a good film is to write a great script.

4. Being a producer can be an incredibly lonely, challenging experience. There’s so much that you have to know, from casting and financing, to sales and distribution. In order to sustain a career, you have to find ways to keep learning, and to make the work intellectually satisfying. This is impossible to do alone. Be generous with your time and seek out others who will be generous with theirs. By cultivating a sense of community with producers and filmmakers that you respect, you are creating a network of experts and potential collaborators.

Thanks for reading. For those curious about COWBOYS VERSUS INDIANS, check out the project’s website, www.CowboysVsIndians.com. And just so you know, it’s a dot, not a feather. Spread the word!