Food for thought: Who gets to be included for awards consideration and who is not? Independent film producer Karin Chien, who is also a great supporter of CAAM in fostering the development of emerging media professionals through our CAAM Fellowship program, has recently written an open letter to the Producers Guild of America questioning the English-only stipulation.

In an age of globalization and transnational movement this stipulation is important as emergent filmmakers consider the impact of language in their films. What do you think about the PGA’s “English-only” rule? What are its pros and cons? And do you have any favorite films in the recent years that may have been overlooked for awards consideration because of this ruling?

Read her letter below and let us know your thoughts! 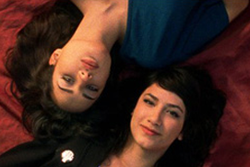 Recently, a film I produced with Melissa Lee and Maryam Keshavarz,Circumstance, was submitted for the Producer’s Guild of America’s awards consideration. Circumstance is a hard film to categorize: it’s a story of teenage love and personal freedom set in Iran, filmed in Beirut, edited in Chile, finished in France, and financed primarily by U.S. sources. And the film is in Farsi. We knew we were a long shot to be nominated, but we were still excited by the prospect. Producing is often thankless and invisible work, and awards that solely recognize a producer’s contribution are few and far between.

That excitement ended when I received an email from the PGA’s Director of Arbitrations & Legal Affairs on December 1. It informed us “unfortunately under the current rule structure, we are unable to accept foreign language films at this time.”

In the email was attached the regulations for 2012 Award Eligibility. Sure enough, the first paragraph stipulated “the motion picture must … be an English language production.” The rule allows foreign films to qualify, if they are in English and have a US distributor. So the deciding factor in our film’s eligibility came down to the language spoken by our film’s fictitious characters.

It’s possible this rule is a holdover, but from when? It was over a decade ago when Crouching Tiger, Hidden Dragon broke the $100 million box office mark for foreign language films. Does the language of a movie mean more to the PGA than the nationality of the producers, or the movie’s primary audience?

Independent producers do not make films to win awards. But producers know how much a nomination, not to mention a win, can contribute to a film’s life and its audience. Awards legitimatize an indie film for an audience, and awards make a difference when Jane Moviegoer is deciding what to spend $12 watching at the theater.

And award eligibility fluctuates constantly. Recently the Motion Pictures Sound Editors union changed their foreign film category to a foreign-language category, in recognition of US members who create incredible sound design on foreign cinema. Globalization is no longer a buzzword. That was the 90s. Now it’s just a fact of financing, consumption, and every facet of business. For example, over 70% of the American film industry’s grosses come from foreign markets. And in LA County, where Hollywood and the PGA are based, 56% of households speak a language other than English. It’s time to wake up to the new world order.

The PGA’s English-only stipulation is at best, an outdated, archaic rule. And at worst, it opens the PGA up to the charge of xenophobia.

The PGA’s mission statement starts with “The Producers Guild of America is the non-profit trade group that represents, protects and promotes the interests of all members of the producing team.”

PGA, whose interests do you represent?

Post-script note: We sent emails a week ago questioning the English-only rule to the PGA’s Director of Arbitrations & Legal Affairs, the Chair, the Vice-Chair, the now defunct Independent Committee at the PGA, and are still awaiting a substantial response.