At CAAM, our mission is to bring the stories of our communities to light. We are pleased to introduce four new dynamic titles to our film collection. Each of these new films illuminate the multifaceted Asian and Asian American experience and we are excited to add them to our catalog!

In the coming month, we will pair each new film with a related pre-exisiting title from our film collection, offering both films at a limited time special rate. 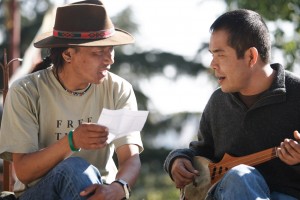 A Song of Hope

TIBET IN SONG is an unforgettable and intimate look at one man’s struggle to preserve traditional
Tibetan music, culture, and national identity.

Leaving Tibet after the Chinese invasion of 1950, director Ngawang Choephel was raised in India where he was surrounded by Tibetan refugees who instilled in him a love for traditional music. Returning to Tibet nearly forty years later as a musicologist, Choephel hoped to record what remained of Tibetan folk music. Confronted by the sounds of Chinese pop music and Communist propaganda, Choephel persisted in his efforts to preserve this native musical history, only to be imprisoned by the Chinese government as a spy.

TIBET IN SONG offers a rare look at the country’s unique and vibrant heritage through the eyes of a
talented and determined musicologist and filmmaker. This poignant film also succeeds as a celebration of folk music and the generations of Tibetan people challenging cultural domination.

Similarly, TIBET HOPE focuses on the Tibetan’s daily struggle while exiled from their homeland. This film, directed and produced by Emmy award-winning cinematographer, William Bacon III, centers on the challenges and the hopes of the Tibetan people who strive to ensure the preservation of their cultural identity, spirituality and political philosophy for generations to come.

Both films provide an honest and emotive look at Tibet and its people in the midst of the world today.

Buy TIBET IN SONG and TIBET HOPE for $320 (College/Institution), a $446 value! Use code: TISTH at check out for discount on our Buy CAAM Films site.