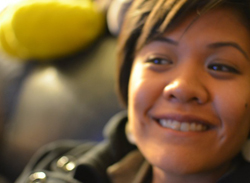 When CAAM was asked sponsor someone we thought was an APA Woman Leader, we knew right away who she would be. We are proud to nominate Theresa Navarro – former CAAM Corporate Relations Manager and wearer of many hats as a Filipina American arts professional, organizer, educator, producer, and actress. Theresa was integral to the fundraising and event-planning team for CAAM’s San Francisco International Asian American Film Festival, the largest showcase of Asian and Asian American film, music, and digital media in the country. She has starred in independent films OPTION 3 and FRUIT FLY and is currently making movies as an independent producer.

Along with CAAM, she has collaborated with various multimedia arts organizations in the San Francisco Bay Area, Hawaii, and across the country. Theresa has an American Studies graduate degree from the University of Hawaii at Manoa and holds undergraduate degrees in History and Comparative Ethnic Studies from the University of California, Riverside.

Along with Theresa, we would like to extend our congratulations to the other nominees!