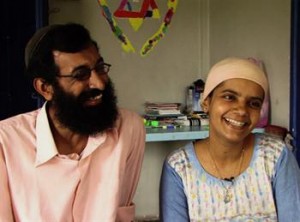 NEXT YEAR IN BOMBAY
NEXT YEAR IN BOMBAY introduces us to the surprising diversity of India’s Jewish populations as well as the challenges they face in maintaining their culture and traditions as their populations dwindle. With a great soundtrack propelling it forward, the film takes us from rural Maharashtra to Bombay and deep into Andhra Pradesh. Along the way, we meet lay leaders struggling to serve the needs of their isolated rural communities as well as a dynamic young couple torn between their desire to see Judaism thrive in India and their commitment to providing their children with a Jewish education only possible if they move to Israel. —Mark Valentine 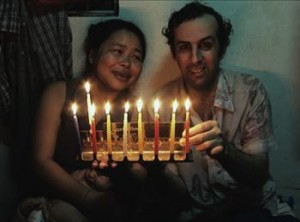 PHNOM PENH LULLABY
Twitchy Ilan Schickman, a naive Israeli émigré, makes a meager living reading tarot cards to support his Cambodian girlfriend, Saran, and their two daughters, two-year-old Marie and six-month-old Jasmine. Gradually, Polish documentary filmmaker Pawel Kloc’s camera begins to uncover the disturbing reality of the family’s nightly existence. Kloc constantly keeps the audience off-balance in his narrative scheme, mirroring this desperate world that seems to be teetering on the brink of madness. But one thing is certain: This unflinching portrait of a family adrift easily makes PHNOM PENH LULLABY one of the strongest docs of the year. —Thomas Logoreci

Keep up with the CAAM Facebook page for the chance to win tickets to these screenings.