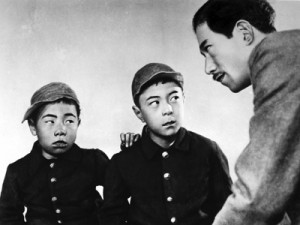 I WAS BORN, BUT…
I WAS BORN, BUT… is a silent feature from 1932 directed by Yasujirô Ozu. Ozu, who died in 1963, is best known to American cinephiles for his post-World War II dramas like TOKYO STORY and EARLY SPRING, delicate and rigorous stories of family life and generational tension in a changing Japan. The exquisite precision of Ozu’s shooting style is certainly evident in I WAS BORN, BUT… The mood, however, is comic, at times boisterously so, and the setting is a world where relations—among classes, between parents and children—seem fixed rather than fluid. —Excerpted from the New York Times article by A.O.Scott

Keep up with the CAAM Facebook page for the chance to win tickets to this screening.