It came as a big shock to everyone, I think, when Japan suffered its first catastrophic earthquake on March 11th.

It came as a big shock to everyone, I think, when Japan suffered its first catastrophic earthquake on March 11th. For us here at CAAM, it happened right during the first opening weekend of the San Francisco International Asian American Film Festival, much of which was taking place in J-town.

You can imagine that we had the well being of the Japanese people in our hearts and minds throughout much of the Festival. Even during a heavily laden news cycle, Bay Area communities haven’t forgotten, and in the past month have rallied to fund raise and support people affected by the earthquake and flood. I went JapanAid SF and We Are One Island: Japan Relief Concert and Auction in April to find out what it takes to turn out a lively event to support disaster relief.

JapanAid SF was organized by a group of students and community activists at one of my favorite Mission hang out spots, the Make Out Room. The event featured performances by indie band Sentinel, hip hop duo Poeticali Distherbed and Brazilian dance group Sambaxe.

I got a chance to speak with Tarabud, singer and bassist of Sentinel also spoke to me about their group came to lend their form of dreamy indie pop to a good cause.

I also asked Mieko Yeh, one of the organizers of the event, what it takes to put on an event like this in such a short amount of time. In her words, “a crap-load of goodwill and motivation even if you may not have that much money… All it takes is one person to say, Hey!  Let’s do this!’ and serendipity kind of takes over (along with hard work).”

Raffle prizes included elusive tickets to Giants games, as well as to Outside Lands, the epic three-day summer music festival in Golden Gate Park. For one nights’ worth of music and giveaways, the Japan Aid SF team raised almost six thousand dollars.

WE ARE ONE ISLAND: Japan Relief Concert and Auction

We Are One Island: Japan Relief Concert and Auction was a large event, co-sponsored by CAAM, and held in the impressive Oakland Asian Cultural Center’s grand Edward W. Chin Auditorium.

The performances were marked by somber moments and celebratory ones, and featured acts from interpretive dance to Taiko, spoken word to indie rock. The auction featured pieces by locally-known Asian American artists. 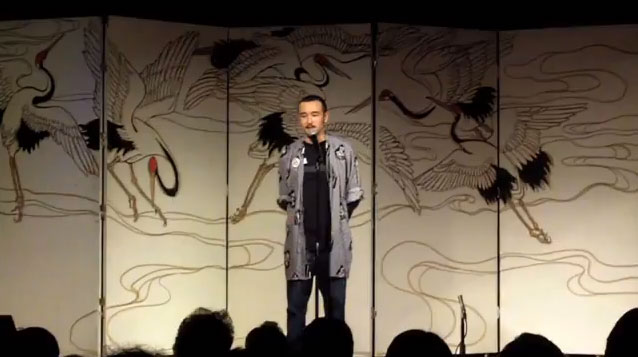 I got a chance to record speak to spoken word and hip hop artist Colin Ehara, known onstage as Senbei, about how the earthquake personally affected him and his family pushed him to action.

As much as these events have been about raising awareness and supporting earthquake survivors, they have also been about building and maintaining community here in the Bay Area. As Mieko noted about the We Are One Island benefit, “there were a lot of artists who went on the Tule Lake pilgrimage last year as participants and performers.  That was pretty rad to see that those folks stayed connected.”

The proceeds from both of these fundraisers go towards helping the Japanese Community and Cultural Center of Northern California’s Northern Japan Earthquake Relief Fund.

Find out more at jccnc.org