THE HOUSEMAID opens on February 4, 2011 at Landmark’s Lumiere Theatre in San Francisco, Landmark’s Shattuck Cinemas in Berkeley, and Camera 12 in San Jose. 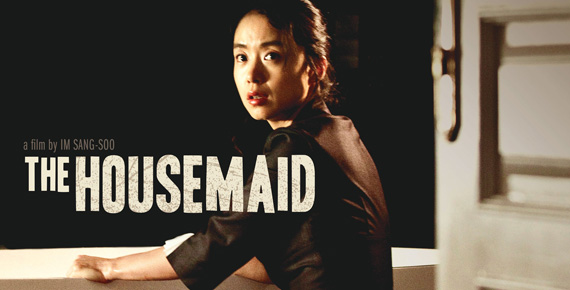 A favorite at this year’s Cannes, Toronto, Mill Valley and Fantastic Fest film festivals, THE HOUSEMAID is a stylish, sexy thriller about an innocent young woman caught in the twisted web of a rich family’s games.

Eun-yi (Cannes Best Actress winner Jeon Do-youn of Secret Sunshine) is hired as a nanny in an lavish mansion by businessman Hoon (Lee Jung-jae) and his very pregnant wife, Hae-ra (Seo Woo). When Eun-yi is seduced by the father of the house, she becomes the unwitting victim in a series of traps laid by the women of the house—Hae-ra, her villainous mother (Park Ji-young), and their seemingly loyal but increasingly bitter housekeeper (Yun Yeo-jong). Intensely erotic and fiendishly entertaining, THE HOUSEMAID builds to an unforgettable climax as Eun-yi must outwit them and escape their schemes to protect her sanity—and her life—from the vicious family.

Written and directed by Im Sang-soo (The President’s Last Bang, A Good Lawyer’s Wife, Tears), remaking the classic 1960 original by the same name by the late director Kim Ki-young.