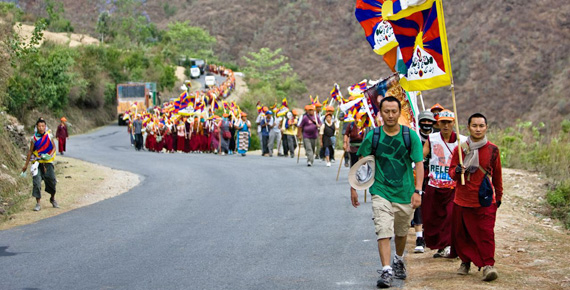 The Bay Area theatrical premiere of THE SUN BEHIND THE CLOUDS, a documentary by Tibetan filmmaker Tenzing Sonam and his partner, Ritu Sarin, that compellingly updates the struggle for Tibetan independence by focusing upon the March 2008 demonstrations against Chinese rule, the largest ever since the 1959 take-over of that nation, and the split among Tibetans themselves regarding the most effective approach to Chinese intransigence. The film was at the center of a controversy at the Palm Springs International Film Festival, where screenings of two Chinese feature films were pulled by the Chinese government in protest of the festival’s exhibition of THE SUN BEHIND THE CLOUDS.

The Dalai Lama, living in exile in Northern India, is interviewed extensively and given the opportunity to explicate his “Middle Way Approach,” a compromise position essentially giving up the goal of Tibet’s independence in exchange for cultural and social autonomy. A younger generation of Tibetans who are devoted to the Dalai Lama, but who nonetheless feel his solution is ineffective, appear in the film, detailing their more militant position. This is the first film to show the Dalai Lama addressing the political complexity of the Tibet issue, both in his homeland and within the exile community.

“Essential viewing for anyone who cares about the fate of the mountain region and the legacy of the Dalai Lama… The film is notable for its focus on an extraordinary year in Tibet’s history and on Tibetans themselves – historians, writers, activists, all eloquent, impassioned and living in exile.”
– Sheri Linden, The Hollywood Reporter

The documentary does a superlative job of examining the half-century dispute over Chinese rule of mountainous Tibet.
– VA Musetto, New York Post