A master by any measure, Kurosawa exploited the epic possibilities of the big screen while remaining grounded in a fundamental humanism. This three-month retrospective at the PFA is a chance to explore the full range of his fifty-year career. 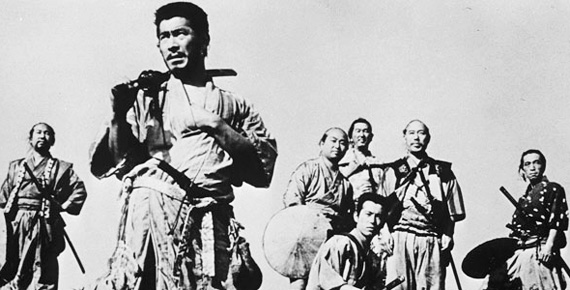 A master by any measure, Kurosawa exploited the epic possibilities of the big screen while remaining grounded in a fundamental humanism. This three-month retrospective is a chance to explore the full range of his fifty-year career.

Born in 1910 in a Japan just emerging from its isolation, Kurosawa studied painting and literature, especially Dostoevsky and Gorky; after the suicide of his influential older brother in 1933, he abandoned his art career and entered filmmaking, ascending from the lower rungs of Toho Studios to become one of Japan’s, and the world’s, most important directors. His rise to prominence in the 1950s coincided with (and helped create) the rise of the “art film,” but that label only obscures his many styles and talents. He adapted Shakespeare, Russian novels, and American detective stories, ancient Japanese plays and contemporary Tokyo tales; and worked in every genre from crime dramas to samurai films, large-scale feudal epics to intimate character pieces. All his films were united by an embrace of ordinary humanity and heroism (and, in many cases, laughter), the heroism not of fighting or conquest, but of devoting oneself to a greater good, and achieving it.

Save on AK 100 and Support PFA!
To celebrate the centenary of the birth of Akira Kurosawa, the Criterion Collection has created the gorgeous DVD collector’s set AK 100: 25 Films by Akira Kurosawa. For a limited time, you can save money on your purchase while supporting the Pacific Film Archive. Buy AK 100 at criterion.com, enter code AKPFA at the prompt, and you’ll save 25 percent off the retail price of $399.95—plus, the Criterion Collection will make a $25 donation to PFA on your behalf.