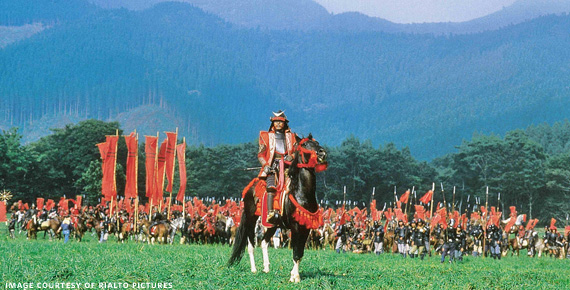 In its epic scale, stylistic grandeur and tragic contemplation of human destiny, RAN (literally, “chaos” or “turmoil”) brings together the great themes and gorgeous images of the director’s life work. A brilliantly conceived meditation on Shakespeare’s King Lear, crossed with Japan’s 16th-century Civil Wars, it stars the great Tatsuya Nakadai (Kagemusha, High and Low, Yojimbo, Hara Kiri, etc. etc.) as Lord Hidetora Ichimonji, an aging ruler who decides to abdicate and divide his land equally among his three sons, unleashing an intense power struggle as his sons and daughters-in-law scheme for power and revenge. A spectacular adventure punctuated by epic battle scenes, RAN was at the time of its release the most expensive film ever made in Japan, with breathtaking color and a visual splendor that remains unparalleled. (Kurosawa devised the entire film in watercolors ten years before production began). Named Best Foreign Film of the Year by the New York Film Critics Circle and Best Film of the Year by the National Society of Film Critics, RAN was also Oscar-nominated for Best Director, Cinematography, and Art Direction, with Emi Wada winning for her dazzling, three-years-in-the-making costumes. (Japan, 1985)

The film’s running time is 162 minutes; it is not rated. In Japanese; fully subtitled in English.

Landmark’s Embarcadero Center Cinema in San Francisco
(415) 267-4893
Advanced tickets will be available at: online and theatre box office by June 1, 2010.