Kit Hui’s FOG premiered at the Kabuki and Viz this weekend. I loved this film for its understated, subtle poignancy. Before the festival, I had an email exchange with Kit Hui, who makes her writing/directing debut with this film. 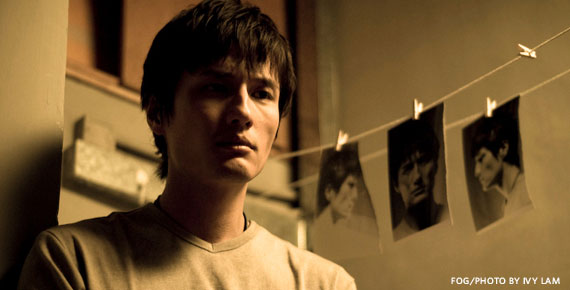 Kit Hui’s FOG premiered at the Kabuki and Viz this weekend.  I loved this film for its understated, subtle poignancy.  Before the festival, I had an email exchange with Kit Hui, who makes her writing/directing debut with this film.

RC:  What is your background in filmmaking?

KH:  I was a Comparative Literature major at UC Berkeley, and by chance I took a film class with Loni Ding and a class on Asian Cinema just before graduation, both transformed my movie-going experience and inspired me to become a filmmaker.  I started taking classes at FAF and made my first short in SF.  Eventually I moved to New York City and worked for Killer Films and later for Jeff Levy-Hinte (Antidote Films), made another short during then.  A few years later, I applied and got accepted into the MFA Film program at Columbia University, majoring directing.  I’ve made a few shorts in film school, including MISSING, and since then I’ve been working and developing my feature projects, and for a period of time, I also worked with BBC2 on a documentary series about Chinese in Britain.

RC:  You have quite a few credits for the film – writer/director/producer, if I’m not mistaken.  What was your inspiration and motivation for this project?

KH:  I usually write and direct my own films, I sometimes also edit them because I can’t afford to hire an editor.  With FOG, I actually picked up the producing role involuntarily when the original producer dropped out a month and a half before we’re set to go to Hong Kong for pre-production.  Most of the finance and cast/crew were pretty much in place, so I felt we had to push forward and ended up being my own producer.   The inspiration came from a documentary I saw about a young man who was found wandering outside a hospital entrance, having suddenly lost all his memory.  I was intrigued by this man and his search for his identity.  I thought it’d be an interesting concept if this story is set in Hong Kong, which at the time the city was preparing for the tenth anniversary celebration of the handover.  Plus, I know Terence well, having worked with him on MISSING, I thought he’d be very good for this role, so I began to develop the script.

RC:  Your main character loses his memory sometime before the movie starts; we see him going through the motions of life, not quite connecting to most of it, soul-less and seemingly driven by mindless habits and superficial-seeming relationships for most of the film.  Did you intend this as a metaphor for a loss of identity that occurred with the handover of Hong Kong?

KH:  The film’s main theme is not Hong Kong.  But I was fascinated by Hong Kong’s mentality and identity post-1997, as an emigrant, I feel the change in the city and in its people acutely compared to the Hong Kong I used to know and grow up in.  Plus, I’m always fascinated by the question of identity.

This film begins after the main character has already lost his memory because I’m most interested in the effect rather than the cause.  How does a person function without any memory?  Especially in a time where everyone operates under a certain social norm, where history and memory form our identity and guide us to behave in a particular fashion.

I personally love films that can be seen on different levels, that can represent different levels, be it personal, family, social or political.  However, I think that any big (historical/political) issues could only be narrated in the individual, to give the audience some specificity, otherwise the film would become too general and imprecise.  The question the film tries to raise is “identity”.  The audience has the choice to answer it in many ways, be it on a personal level: who is this character and what has he done in his past; or on a social/political level: who he is in relations to the city.  All are valid and good.  I guess I don’t want to strictly say that the main character is a metaphor of Hong Kong because I don’t want to limit the audience’s viewing experience, but if people find that linkage/metaphor, I think it’s a very good interpretation for the film.

RC:  Finally, towards the end, he seems to develop a tenderness towards his daughter.   He’s lost his past, yet somehow there is a hope for the future.  I really liked this.  Could you elaborate?

KH:  I do love films that offer a glimpse of hope, not that “the hero saves the day and everyone is going to live happily ever after”, but films can make the world a less sad place and offer something more to the audience.

While I have no idea what will happen to the main character after the last shot of the film (as in real life, no one knows the ending point for any individual), I think the hope comes from when we see the shift in Terence’s character, when he realizes that he must confront the consequence, however hard it is or however it might turn out for him, good or bad.  In that sense, he’s learning to become responsible, an identifiable and admirable human trait that might eventually help (re)define who he is.

RC:  As an individual, he’s lost, but he finds comfort and connection in relationship, and ultimately a glimmer of meaning in his relationship to his daughter.  I found that very sweet (and real), given the stereotypical view (perhaps particularly in Hong Kong?) of a man’s identity being formed by his achievements in work or his financial worth.  Were you conscious of that?  Where did that come from?  Do you think it comes from your perspective as a female director?

KH:  I wasn’t conscious of that actually.  I don’t define myself as a female film director but rather a film director who happens to be also a woman.  Interestingly, most of my protagonists tend to be male.  FOG perhaps isn’t like most popular HK genre films in which they’re usually ultra-macho, their manhood defined by their guns/money.  I find parenthood (re)defines one’s identity just as powerfully as work/money.  People (man/woman) tend to grow up when they’re suddenly responsible for another life, that’s when they become more selfless, and by being more selfless, they’re more aware of who they are, if that makes sense at all.  In FOG, the main character is asked to step out of his drifting state for the first time, in order to take care of someone else, and I think that gives him a sense of direction and ultimately a sense of identity.

KH:  No.  I’m not a parent myself, but there was a sudden baby boom around all my friends, so I have to grow up and become a responsible auntie too!

RC:  What are your plans for FOG?  Has it opened in Hong Kong?

KH:  We’re just starting the festival circuit now, awaiting to see what the audience’s reception might be for the film before we finalize our plans, including theatrical run and distribution.  We’re hoping to do a screening event in Hong Kong, depending on everyone’s schedule.  We just received news that FOG will be Asian-premiering at the Singapore International Film Festival in April.

RC:  What else are you working on now?

KH:  Besides FOG, I’m currently developing a new project about war orphans, it went to Pusan Promotion Plan last year.  It’s still at the script writing stage, which requires quite a bit of research, but I’m happy with the direction it’s heading.

RC:  Thanks, and best of luck to you with FOG and all your other projects!

Ravi Chandra is a psychiatrist and writer in San Francisco.  He is happy to be included in the new, groundbreaking South Asian American poetry anthology, INDIVISIBLE , edited by Neelanjana Banerjee, Summi Kaipa and Pireeni Sundaralingam (University of Arkansas Press, April 2010)