From the desk of SFIAAFF’s Program Manager Christine Kwon:

Live Octopus, A Giant Mall, and a Gazillion Movies (well, not exactly)

I took my first trip to Pusan, Korea, this October to attend the illustrious Pusan Int’l Film Festival. Now in its 14th year, the festival is characterized by its charming city surroundings and ambitious scope of programs. With more than 300 films, the festival also acts as a central wheel-and-deal hub for the Asian Film Market, including the Pusan Promotion Plan (PPP), which matches potential film projects with funding sources. It’s no wonder, then, that programmers and distributors from all over the world flock to the “Cannes of Asia” to vie for the hottest in art-house to blockbuster picks, often from new directors bound for international stardom.

I flocked there myself, and in addition to viewing about 20 films in 3 days (note: Pusan has a special screening area for industry people – you watch movies on VOD or DVD on a P.C.), I had a few moments to explore this unique coastal city and get the lay of the PIFF land.

Look, there’s a huge man on stilts at the train station. Part of Korea’s take the train campaign. 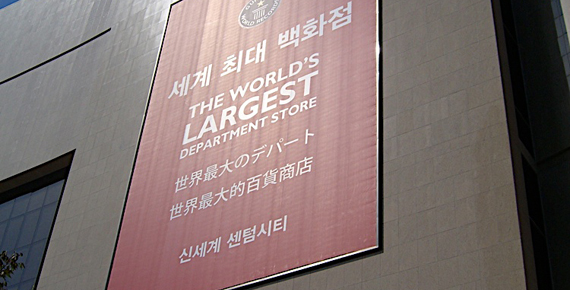 Shinsegae, one of PIFF’s venues, is the largest Department Store in the World.

Yes, I ate This

Pusan’s infamous seafood offerings. The tentacles stick to your mouth.

My co-conspirator Abe Ferrer, the Exhibitions & Festival co-director at the VC Film Festival, was kind enough to show me around the town and fest.

Call me a sheep, but I joined a crowd gathering outside the mall, and guess who showed up!

I heart Pusan (and Seoul :)