CAAM invites you to an exclusive sneak preview of Ang Lee's latest film, TAKING WOODSTOCK, sponsored by Frameline and Focus Features at the Landmark Embarcadero Cinema, August 5 at 7:00PM. 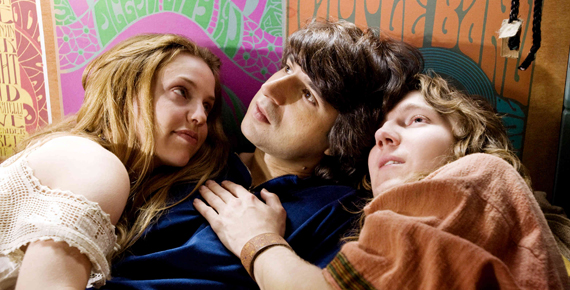 TAKING WOODSTOCK is the new film from Academy Award-winning director Ang Lee – and it’s a trip! A 1969-set story, based on Elliot Tiber’s memoir, about a man, Elliot Tiber (Demetri Martin of the hit cable series “Important Things with Demetri Martin”), who inadvertently played a role in making the Woodstock Music and Arts Festival into the famed happening it was. Working as an interior designer in Greenwich Village during culturally and politically exciting times, Mr. Tiber felt empowered by the gay rights movement. But he was also still staked to the family business – a Catskills motel. Upon hearing that a planned concert had lost its permit from the neighboring town of Wallkill, NY, Mr. Tiber called producer Michael Lang (Jonathan Groff) at Woodstock Ventures to offer his family’s motel, the El Monaco, to the promoters. Soon the Woodstock staff was moving into the El Monaco; half a million people were on their way to Mr. Tiber’s neighbor’s Max Yasgur’s (Eugene Levy) farm in White Lake, NY; and Mr. Tiber found himself swept up in a generation-defining experience that would change his life, and American culture, forever.