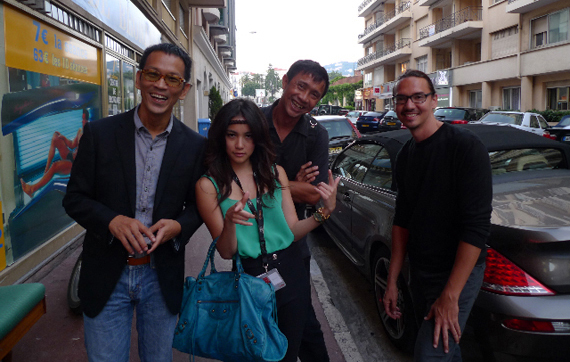 Bumping into Thailand’s Pen-ek Ratanaraung (left) with the cast and crew of his latest film Nymph, an Official Selection in Cannes’ Un Certain Regard category.

Red carpets, celeb spotting, la Croisette…Oh! The glamorous Festival de Cannes! When I told others I would make my maiden voyage to the South of France, they expected to ‘spot me on television’ and ‘rub shoulders with Brangelina.’ Well…wouldn’t that be nice?

Attending the Cannes Film Festival, one of the most prestigious film festivals in the world, is certainly an exciting adventure for me. It is important to dispel the myths right away: most people attending the festival are not going to be seen on television worldwide. Between hundreds of screenings, meetings, receptions and parties on a daily basis, time is never on your side. As a first-timer there, I had to get to speed with how to navigate the festival quickly.

Between finding the venues for screenings (and am still struggling to learn how to pronounce Salle du Soixanteme), one thing I learned quickly is if your badge doesn’t give you priority (mine didn’t), get used to queuing up for screenings and getting turned away once it is full or when the film commences. For Official Selection screenings at the Grand Theatre Lumiere, a ticket is required, and involves a complicated point system that will determine when and whether you have enough points to secure an ‘Invitation.’ The hottest ticket this year is Quentin Tarantino’s Inglorious Basterds: everywhere you go there are signs pleading for a ticket. One explanation for the glamour: when the ticket says ‘Evening Dress Required,’ which are for all evening screenings at the Lumiere, they enforce the black tie rule!

While there are films that I didn’t manage to see in Cannes, I saw plenty that will surely be appearing in cinemas and festivals around the world in upcomng months. While Cannes veterans tell me that there are less people at the festival this year as a result of the global economic downtown, it is impossible not to sense the enthusiasm from attendees eager to discover new films by both newcomers and veterans from across the world. Not one day goes by in Cannes without a discussion of films amongst friends and colleagues, via twitter, over meetings, lunches and dinners…be it civil or heated, it is always passionate.

For the record, while I did spot some filmmakers and celebrities during the festival, I did not get a ticket to Inglorious Basterds and see Brangelina. I did, however, see Tarantino in the audience at a market screening!