Beginning May 1, 2009, for the first time ever, the Center for Asian American Media (CAAM) will present over 10 hours of Asian American programming exclusively through Comcast On Demand in recognition of Asian Pacific American Heritage Month. 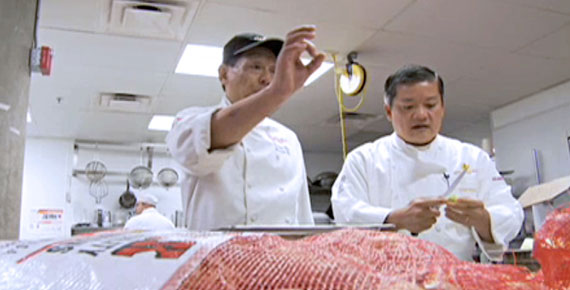 Beginning May 1, 2009, for the first time ever, the Center for Asian American Media (CAAM) will present over 10 hours of Asian American programming exclusively through Comcast On Demand in recognition of Asian Pacific American Heritage Month.

CAAM’s May programming provides a diverse range of exceptional works including the award-winning documentaries “Hollywood Chinese” by Arthur Dong and “Chinese Restaurants” by Cheuk Kwan. In addition, original productions for On Demand include “Lala,” produced by H.P. Mendoza and hosted by L.A. Renigen of the critically-acclaimed “Colma: The Musical.” New interviews that were conducted with guests at the recent 2009 San Francisco International Asian American Film Festival will also be available.

“CAAM is proud to be part of this great opportunity. There are so few outlets for this caliber of high-quality Asian American content, and we salute Comcast for their generous support of this initiative. In the variety of emerging platforms available, we are extremely excite to be part of this collaboration,” said CAAM Executive Director Stephen Gong.

“Hollywood Chinese” by celebrated filmmaker Arthur Dong brings together a captivating portrait of filmmakers and iconic images for a high-spirited look at the ways the Chinese have been imagined in the movies, from silent classics to contemporary blockbusters. Starring a virtual who’s who of top Chinese and Chinese American talent, including Ang Lee, Nancy Kwan, Joan Chen, B.D. Wong, Amy Tan, Wayne Wang, and David Henry Hwang. This award-winning documentary features special appearances by veteran actor Christopher Lee (“Fu Manchu”) and double Oscar® winner Luise Rainer (“The Good Earth”). “Hollywood Chinese” will be available May 28, 2009 following the national PBS premiere on “American Masters.”

San Francisco International Asian American Film Festival
Interviews from many of the featured guests at the 2009 SFIAAFF, the leading Asian American film festival nationwide. Highlights include:

“Chinese Restaurants” tells the story of the Chinese Diaspora through its most recognizable and enduring icon – the family-run Chinese restaurant. In this 5-part series, Canadian filmmaker Cheuk Kwan takes us on a tour of restaurants around the world, bringing us into the lives of extraordinary families as they share moving stories of struggle, courage, displacement and belonging, and what it means to be “Chinese” today.

Visit remarkable families in Argentina, Brazil, Canada, Cuba, India, Israel, Madagascar, Mauritius, Norway, Peru, South Africa, Trinidad and Tobago, and Turkey. Meet the many faces of the Chinese Diaspora as they celebrate their unique identities, forged by political and economic forces, their ancestors’ legacies and the vibrant cultures of their chosen homes.

“Lala” (an original CAAM production) by H.P. Mendoza is a fresh and breezy take on Asian cuisine in Los Angeles. Highlights from the 8 new episodes include:

• Host L.A. Renigen steels her stomach and heads to Jitlada Thai, popular with the Hollywood set and famous for having the best “stinky” and spiciest food in Los Angeles.
• The Kogi Taco Truck blends the best of Korean, Mexican and late night dining to-go. L.A. talks to the Kogi chef about the two-hour wait for a two-dollar taco. Has everyone gone mad or could this be the perfect bite of Los Angeles?
• Host heads to an unassuming strip mall in Studio City to meet the man behind the myth. She talks with famous omakase chef Nozawa and his family about tradition and trust, and tries the sushi on for size at their new venture, SugarFISH.

“Roots in Water” (an original CAAM production) by Stuart Yamane
The Sumida Watercress farm is a multi-generational organic farm in Hawaii that steadfastly refuses to give up on their values or business. For owner David Sumida, it’s also home to his punk musician alter-ego Beano Shots. This beautifully-shot documentary preserves the touching story of the family farm with a uniquely Hawaiian twist.

“Asian Chefs Association” (an original CAAM production)
Every holiday season, the Asian Chefs Association hosts a free meal at the internationally revered Glide Memorial Church in San Francisco’s Tenderloin district. This past year, they prepared over 1,600 meals in one day, their most ever, to appreciative patrons.