There were a lot of things I expected to get from being in this amazing program, all of which were met above and beyond anything I could have envisioned. What I never expected to get, was to finally find my racial identity. 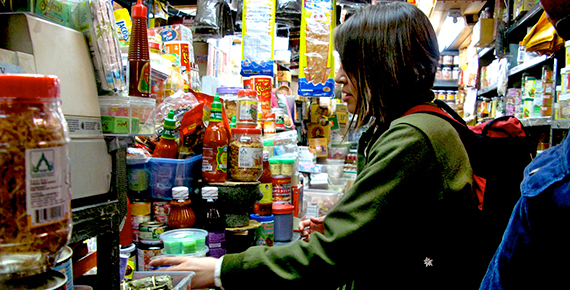 There were a lot of things I expected to get from being in this amazing program, all of which were met above and beyond anything I could have envisioned. What I never expected to get, was to finally find my racial identity.

I’m 5’8. I have red hair. Skin so pasty it borders on translucent. But my green eyes, they are almond shaped with an Epicanthic fold – the only visual clue that you would ever have that I’m a quarter Japanese.

Growing up in a large suburb of Saint Paul, Minnesota, outside of my family, I had never met another person who was part Asian and no one else Japanese. Sometimes I think that my Grandmother is the only Japanese woman within a 30 miles radius of Saint Paul. I’m sure I’m exaggerating, but that’s what it has always felt like. We Minnesotan’s are mostly Scandinavian, and I’m clocking in at 50%.

With all my grandparents in the Twin Cities, my heritage became a dominant force in my upbringing. The strongest came from my Japanese Grandmother. She instilled in my brother and I an incredible pride and passion for where we came from. Her values and traditions permeated our childhood more than anything else. Jokingly, she has always called us her Hapa-Haole grandchildren. She was born and raised in Hawaii and she always explained it as her way of saying that we’re both hers and Caucasian and that even though it was kind of derogatory, she meant it in the most loving way.

I had never heard someone else use that term to define themselves until we went to the panel on Multiracial Multiculturalism.

It took me aback, almost shockingly. For the first time in my entire life, I identified with another person who wasn’t related to me. As a Scandinavian Euro-Asian, I connected with the ideas and struggles of being Hapa. I’ve never felt quite right calling myself only White and certainly not only Japanese. On questionnaires when I have to pick one race instead of marking all that apply, I just don’t answer because I’ve never been one or the other. It’s always felt exactly as they said, an issue of authenticity. I’m not Japanese enough on the outside and I’m not White enough inside.

I loved in the short film, PARALLEL ADELE that played before DIAMOND HEAD, the idea of being a Racial Spy. Because of my Caucasian appearance, I hear things that people would never say in front of my Grandmother. It’s heartbreaking to hear what people say when they think a certain race isn’t listening. I also know how it feels when I’m out with my Grandmother and people don’t quite know what to make of us. They can’t figure out how we’re related and that usually inspires some uncomfortable, awkward questions, to say the least.

Even though I’m only 25% Japanese, that 25% has been through more than rest of my heritage ever had to deal with. My Japanese side originated as a Samurai family in Hiroshima. Generations later, some of the family moved to Hawaii and my Grandmother was born there. When she was child, one day she walked outside and planes were flying above her. Since it was her birthday, her family all joked that they were putting on an air-show just for her – they sometimes did that at Pearl Harbor. It wasn’t until bullets started to fly around them that they realized it was an attack. They hid in a house with their neighbors, lining mattresses against the walls to protect themselves.

I never understood why, but somehow my Grandmother and her brothers avoided internment when they came to the Mainland. She always said her father protected them from it, but he was a dentist. She never was quite clear about what we lost in Hiroshima either, but that’s just how she is.

My Grandmother met my Grandfather at the University of Minnesota. At a time when being Japanese was considered horrible by association, my Grandfather sought her out. He was an amazing man who didn’t care about race; it was all about the person. I consider that to be one of the most important lessons that anyone has ever taught me. Even when my Grandmother’s family disowned her for marrying a Haole, my Grandfather’s family embraced her. These two were so strong, marrying at a time when not only interracial marriages were frowned upon, but especially the union of a European man and Japanese woman, in Minnesota.

Having that behind me, I feel so proud of where I have come from and the strong people that raised me and my brother to be proud of every country we have inside of us. I’ve always felt lucky that I have three very different ethnicities inside of me and within my family this has always been encouraged and embraced. But in the world, I felt alone and conflicted. I knew I couldn’t possibly be the only person who felt torn and this festival helped me discover that. It’s okay to be conflicted and non-committal and there are others who deal with the same issues for the same reasons.

It’s an incredible feeling to hear the same fears and concerns that I’ve grown up with talked about and experienced by others. It makes me feel significantly less alone in my racial identity. I don’t have choose, I can be my Grandmother’s little Hapa-Haole and that’s nothing wrong with that. I can be a Scandinavian Euro-Asian and proud of it. I can be who I am, and there’s a community out there that supports that.