Vicci Ho caught up with HIGH NOON director Heiward Mak. HIGH NOON had its US Premiere at SFIAAFF on March 18. 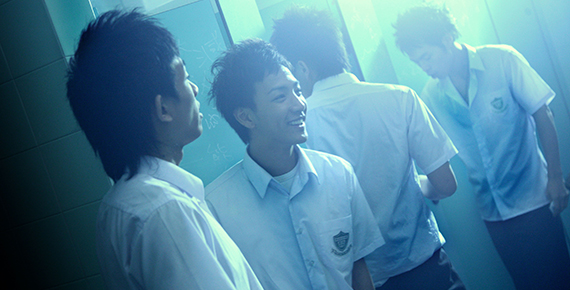 HIGH NOON Hong Kong 2008 | Dir. Heiward Mak
Vicci Ho caught up with HIGH NOON director Heiward Mak on email. HIGH NOON had its US Premiere at SFIAAFF on March 18. Mak talks about her first feature film, and the youth culture in Hong Kong which inspired her.

Vicci Ho: When did you realize you want to become a filmmaker?

Heiward Mak: I think maybe … when I made my silly short video “Fish”.

VH: Tell us about your education background.

VH: How did you become involved with the Winds of September project?

Finally he decided to pick the story of High Noon, because it showed a totally different culture from Tai Wan and Mainland China, it tells the story of Hong Kong youth life today.

VH: Can you tell us a bit more about how the concept of High Noon came about?

When I got this project for the first time, I decided to set the story in 2007. As the Tai Wan and Mainland China version stories were about teenagers in 1997. But I wanted to capture the portrait of Hong Kong local youth NOW. I am in love and addicted to the chaotic city that I’m living in. High Noon was simply about love, friendship and youth life, but it becomes dizzying and hurried in Hong Kong TODAY. So it was a story set in 2007-2008, while the world was welcoming for the Beijing Olympic Game, the teenagers were in their adolescence age, were lost in the virtual and cruel reality that filled with sms, internet and materialism.

VH: Do you think there are very few films that are really representing the youth of Hong Kong today?

Yes, or No…that’s why we are trying to make more, (haha). In fact Hong Kong does have some youth movies, they are showing the pictures and life of youngsters. But it is difficult to say what is REALLY expressing youth life in Hong Kong. Even HIGH NOON, is just telling ‘some’ stories of youngsters in Hong Kong.

VH: You are a very young filmmaker. Are you happy with the response High Noon has received thus far?

HM: Yes, I am glad that we have received quite good comments and responses from different places. And I’m very happy that we can share HIGH NOON in San Francisco. In fact, we are now having reruns in Hong Kong, and it starts at the same day of the screening in San Francisco!

VC: Okay, some fun questions, what are some of your favourite films?

HM: Haha… I was shocked by TRAINSPOTTING when I was still in secondary school. The 400 BLOWS, A BRIGHT SUMMER DAY by Edward Yang… and too many… haha, but THE DARK KNIGHT was my favourite film last year. And I love and am influenced by many animation too, just like any youngster, love cartoons and comics. Recently, the animated documentary WALTZ WITH BASHIR had a great impact to me.

VC: If you can make a sequel to any film, what will it be?

HM: oh… fun question… sequel… I have no idea about that…
but I’m interested in remaking the Hong Kong ghost stories named Three Wishes(1988).

VC: If you can work with any actors or actresses, who will they be?

VC: Are you working on any new project at the moment?

HM: I’m now writing my new script and working as scriptwriter and editor for other directors. As I ran into lots of problems and lack of experience throughout the production of High Noon, I think it is better to learn more and gain experience from the the industry.